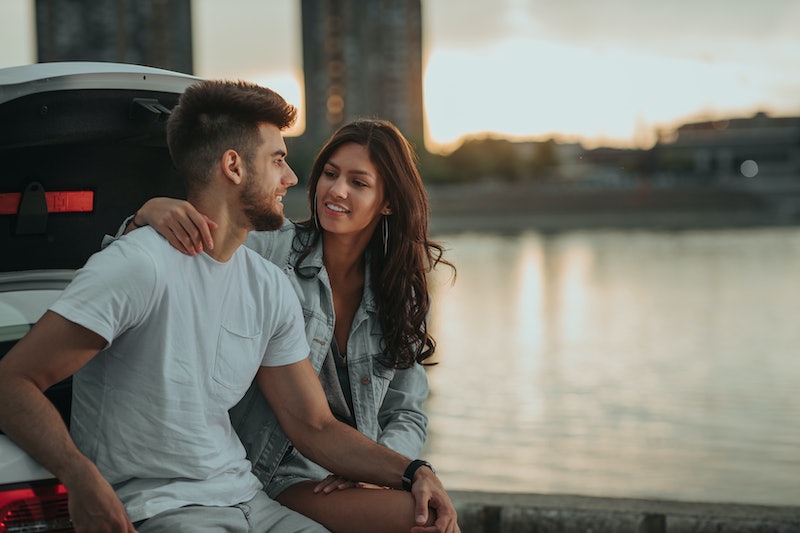 Truth be told, earth sign pairings don’t exactly make the most exciting matches. They tend to lack the spontaneity you’d find in a fire sign couple, the emotional intensity you’d get with two water signs, or the creativity in an air sign match. Yet, Taurus and Capricorn are a pair of earth signs that do pretty well for themselves. They both understand the value of working hard in order to create a good life for yourself, and you’ll likely find them indulging in designer clothes and other luxury goods. Besides their shared love for the finer things in life, they’re also dependable, loyal, and relationship-oriented. If any zodiac couple is going to last, it’s going to be them. Taurus and Capricorn’s zodiac compatibility will give you all the insight into this earthy pair.

“This combination can be the ultimate power couple,” astrologer Clarisse Monahan tells Bustle. “Capricorn can provide a real stability and security for Taurus, which they will enjoy, and Taurus can help Capricorn to open up more to intimacy.”

Taurus is fixed sign energy, which means they bring a sense of stability into their relationships. They can be stubborn, as they rarely ever change their mind. However, they’re very goal-oriented and will do whatever it takes to make things happen. Capricorn, on the other hand, is cardinal energy. They’re the initiators of the zodiac and represent new beginnings and change. Although it may seem like a mismatched pairing, these two can teach the other about the value of persistence and initiative. According to Monahan, a Taurus-Capricorn relationship has the potential to be “soulmate material.”

When it comes to the bedroom, Capricorns have a cooler and more practical approach to it. According to Monahan, they tend to “have sex for the sake of having sex.” They prefer to be straightforward and see it as a human need that just needs to be fulfilled. Taurus is a Venus-ruled sign, so they’re naturally more soft and sensual. Sex for the bull is all about pleasure. Taurus will make it their mission to open their Capricorn partners’ eyes to how enjoyable sex can be.

As astrologer Simone Pinkhasova tells Bustle, Taurus and Capricorn may take some time to give in to the spark and trust one another. But once they start fanning the flames of the relationship, “the passionate fires may be hard to put out,” she says.

Since they’re both earth signs, Taurus and Capricorn have similar traits at their core. They both share an appreciation for security, routine, consistency, and hard work. In relationships, acts of service are important for them, as well as physical touch. When it comes to dating, they’d rather wait for someone special to come along than waste time on people that they’re only kind of into. Because of this, it takes a while for them to allow themselves to fall in love.

“Due to the earth signs’ structured nature, Capricorn and Taurus will quickly bond and nurture an intellectually-stimulating relationship,” Pinkhasova says. “However, tapping into deeper emotions may take a while as both signs tend to be more reserved when expressing and talking about their feelings.”

There’s a lot of understanding between these two signs. Neither partner will push the other to jump into something they’re not ready for. Chances are, Taurus and Capricorn will enjoy developing a strong friendship before taking things to a more romantic level.

One of the biggest problems to watch out for is the butting of heads. According to Pinkhasova, earth signs tend to be laid back until they’re provoked. When they get angry, anything can come out of their mouth.

“You may discover a bit of a struggle between the leadership of the goat and the strong will of the bull,” she says. “Speaking to their feelings isn’t favored or a strong suit of our Cap and Taurus friends, so they’ll have to work on healthy communication and speaking through, ‘I feel’ statements in order to build trust and depth in the relationship.”

Another potential issue between these two earth signs is an eventual lack of excitement. Capricorn, in particular, is a sign that values work and practicality over romance. Being seductive and getting romantic is seen as a waste of time. They do, however, appreciate romantic gestures if it’s given to them. It’s just not something they like doing themselves. Taurus, on the other hand, needs to be wined and dined from time to time. According to Monahan, they may get a bit tired of being the one who always has to make an effort.

Despite the potential issues, this is a zodiac match that works really well. There’s a sense of security in being with someone who’s similar and values the same thing as you do. These two will be able to enjoy a truly stable and lasting relationship with each other.