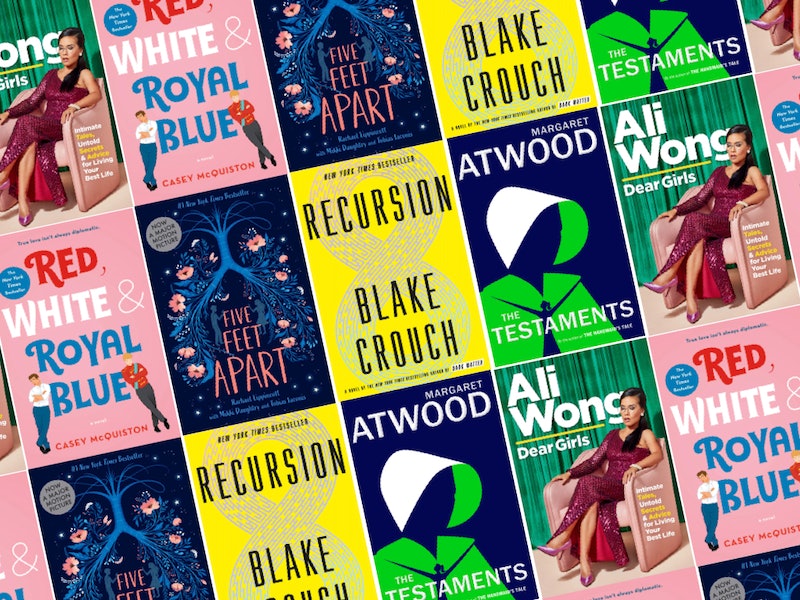 As the year comes to a close, the users of the internet's biggest site for readers, Goodreads, have voted to recognize their favorite books of the year. The 2019 Goodreads Choice Award winners show just how much we love romantic comedies, as Casey McQuiston's blockbuster debut, Red, White & Royal Blue took home two wins this year, and how the Queer Eye hosts can do no wrong. Below is the full list of winners from all 20 categories — consider it the ultimate guide for what you should be reading now, especially if you missed them when they were released.

The Goodreads Choice Awards celebrated their 11th year of existence in 2019, and some patterns have emerged already in the awards' short history. This year marks the ninth consecutive win for Rick Riordan, and the fourth consecutive win for Stephen King — both of whom are nine-time Goodreads Choice Awards winners. It's also the second year in a row that readers have voted a book about beloved Mister Rogers' Neighborhood host Fred Rogers to a win, with Maxwell King's The Good Neighbor: The Life and Work of Fred Rogers taking home the Best History & Biography win in 2018, and Rogers and Luke Flowers' A Beautiful Day in the Neighborhood: The Poetry of Mister Rogers winning the 2019 Goodreads Choice Award for Best Picture Book.

It's no surprise that this follow-up to Margaret Atwood's beloved 1985 novel, The Handmaid's Tale, took home the 2019 Goodreads Choice Award for Best Fiction. Published earlier this year, The Testaments centers on three women and girls — Agnes, Daisy, and Lydia — as they live their lives in the shadow of Gilead, some 15 years after the events of The Handmaid's Tale.

Named one of the best books of 2019 by Amazon, Alex Michaelides' The Silent Patient skyrocketed to No. 1 on The New York Times Best-Seller List upon its February release. The story here centers on Alicia, the infamous black widow who never spoke another word after killing her famous husband, and Theo, the psychotherapist determined to get Alicia to talk about why she committed murder.

From The Seven Husbands of Evelyn Hugo author Taylor Jenkins Reid comes this fictional oral history of a 1970s rock supergroup. Inspired by VH1's popular music docuseries, Daisy Jones & The Six takes readers on a lush journey through the world of post-Woodstock rock-and-roll, where producers bring together flower child Daisy and the broody boys of The Six to make music history.

A book designed to, erm, "[eff] you up a little," Leigh Bardugo's Ninth House departs from her multiple Grishaverse series for a new adventure in the real world. Galaxy "Alex" Stern has had a rough life, but a mysterious benefactor offers to pay her full ride to Yale, provided she agrees to infiltrate one of the University's secret societies.

Casey McQuiston's Red, White & Royal Blue took home two Goodreads Choice Awards this year. One of the year's hottest romances, this novel follows the First Son of the U.S. and the Prince of Wales — both entirely fictional — as they embark on a journey from petty rivalry to fierce romance.

Set in a world in which humanity has begun to experience an insidious mental health condition called False Memory Syndrome, Blake Crouch's Recursion follows the NYPD's Barry Sutton and Helena Smith, a forward-thinking neuroscientist, as they search for answers. But Barry and Helena have stumbled upon things humanity was never meant to know, and they may be the only people capable of saving us from ourselves.

Stephen King is a perennial favorite among the Goodreads Choice Award voters, and he took home the 2019 award for Best Horror with The Institute. Set among a community of kidnapped children housed in a mysterious facility, this new King novel follows a small group of friends who find their numbers dwindling as members of their cohort "graduate" to a separate, more secretive part of the titular Institute — never to be seen again.

Comedian Ali Wong made her publishing debut this year, and now she's got herself a Goodreads Choice Award to show for it. Dear Girls: Intimate Tales, Untold Secrets & Advice for Living Your Best Life is a compilation of letters written by Wong to her daughters, covering everything they need to know — plus a little extra — to be successful as women in today's world.

The follow-up to 2018's Girl, Wash Your Face, entrepreneur Rachel Hollis' new book implores women to live life fearlessly and go after their goals with gusto.

Best Memoir & Autobiography: Over the Top: A Raw Journey to Self-Love by Jonathan Van Ness

Queer Eye star Jonathan Van Ness came out as HIV-positive with Over the Top, his first memoir, which was published in September. Tracking Van Ness' journey to self-acceptance after a life marked by self-loathing and destruction. Over the Top is a poignant read from one of the year's most inspirational and uplifting figures.

Best History & Biography: The Five: The Untold Lives of the Women Killed by Jack the Ripper by Hallie Rubenhold

You know his name, but what can you say about the women he killed? Victorian serial killer Jack the Ripper was never caught or identified, but the five women he murdered in 1888 lived rich lives that were cut short by his blade. In The Five, Hallie Rubenhold uncovers the realities of these these women's day-to-day lives before their unfortunate and untimely deaths.

Best Science & Technology: Will My Cat Eat My Eyeballs?: Big Questions from Tiny Mortals About Death by Caitlin Doughty

Bearing one of the best book titles of the year, Caitlin Doughty's Will My Cat Eat My Eyeballs can help pull you out of your end-of-year reading slump. Answering children's most popular questions about death, Doughty's Goodreads Choice Award-winning book is unlike anything else you've read.

Best Food & Cookbooks: Antoni in the Kitchen by Antoni Porowski

Another new book from a Queer Eye star, Antoni Porowski's Antoni in the Kitchen took home the 2019 Goodreads Choice Award for Best Food & Cookbooks. Lauded by Food & Wine and Eater, Antoni in the Kitchen gives burgeoning home cooks the tools and recipes they need to serve up impression-making dishes whenever the situation calls for them.

From the authors of Wayward Son and Comics Will Break Your Heart comes this feel-good graphic novel. Pumpkinheads centers on Josiah and Deja — high-school seniors who have spent years working together at a fall carnival and pumpkin patch. With the looming threat of college ready to separate them for good, the two friends embark on a memory-making night that neither will soon forget.

In Speak, Laurie Halse Anderson let teen readers know that they were not alone in dealing with sexual assault. Anderson's new memoir-in-verse, Shout, recounts her personal experiences with sexual violence and its lasting effects. It's a difficult, but necessary, read for the #MeToo era.

You already know what this one is about, but be sure to check out Bustle's interview with Red, White & Royal Blue author Casey McQuiston, in which she discusses the "three things that I set up at the earliest stage of character sketching: zodiac sign, MBTI [Myers–Briggs Type Indicator], and Hogwarts house."

Made into a motion picture starring Cole Sprouse and Haley Lu Richardson, Rachael Lippincott's Five Feet Apart explores the romance between two young patients undergoing treatment for cystic fibrosis. Will can't wait to turn 18 and be free of hospitals, and Stella is awaiting a lung transplant she hopes will save her life. The two teenagers fall in love, but must remain physically separated so that Stella can stay on the transplant list.

One of the year's most anticipated YA novels, The Wicked King is Holly Black's stunning follow-up to The Cruel Prince. In order to protect her step-brother, Jude, a human raised among Faeries, has positioned herself to exercise complete control over Faerieland. She's pulling the strings behind the High King, Cardan, but he has his own plans, and will prove himself to be a formidable opponent.

The fourth of five books in Rick Riordan's Trials of Apollo series, The Tyrant's Tomb follows Apollo to San Francisco, where a group of Roman warriors is preparing to do battle with a cabal of evil emperors. In order to succeed, they'll have to uncover the secrets of a Roman tomb — and make it out alive.

Best Picture Book: A Beautiful Day in the Neighborhood: The Poetry of Mister Rogers by Fred Rogers and Luke Flowers

Containing 75 songs from Mister Rogers' Neighborhood and The Children's Corner, this new picture book will give Millennial and Gen-X parents all the nostalgia as they read it to a new generation of Neighbors.