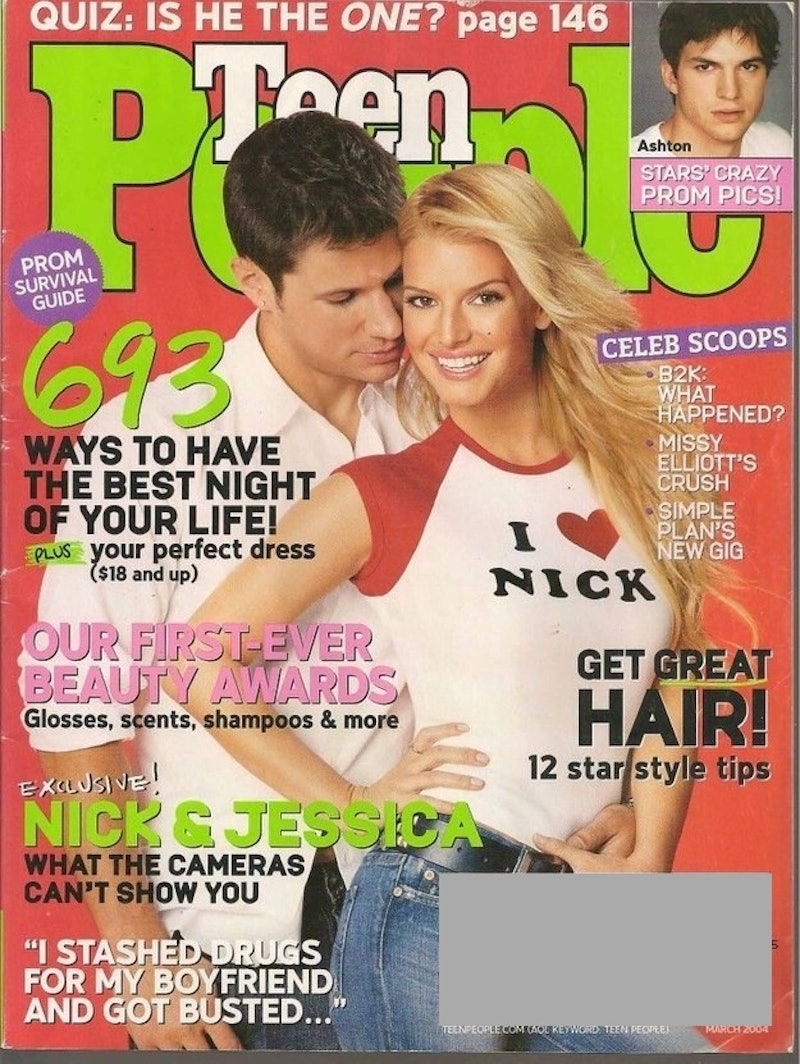 In case you want to feel old, here's a mind-blowing fact: Teen People folded 10 years ago. Yup, the magazine dedicated to teen celebrity culture announced it was coming to an end in 2006. An entire decade later, I miss it as much as ever. While young people today have Instagram, Tumblr, Snapchat, and an ever-growing list of social media sites, nothing will ever compare to the feeling of flipping through the pages of a magazine and tearing out an *NSYNC poster to hang on your wall. Teen People was hands-down one of the best magazines of the late '90s and early '00s.

Don't get me wrong, I was a fan of any teen magazine I could get my hands on growing up. I'd go to the local grocery store and beg my mom to buy me Seventeen, J-14, and Tiger Beat too. But considering those three mags still exist, none pique my nostalgia as much as Teen People. It's like a time capsule of my adolescence.

So why not take a trip back in time? Here's a round-up of the best Teen People covers, ranked by nostalgia. Because from the poses to the clothing to the celebs themselves, you'll instantly be transported to the good old days.

Proving it's been a long time since the early 2000s, I had to Google what movie these two starred in. Orlando Bloom and Kirsten Dunst starred in Elizabethtown , in case anyone else needed a refresher.

From Lord of the Rings to Pirates of the Caribbean, Bloom was a movie heartthrob. Meanwhile, Dunst was in everything from Bring It On to Jumanji. Considering their star power at the time, starring in a movie together really solidified their '00s fame. They also reportedly began dating briefly after filming Elizabethtown, so covers like this only fueled those rumors.

Also, I love the "Are Paris, Nicole, & Avril Marrying Too Young?" headline. Perhaps Teen People was right, because none of those ladies wound up with the guys they were engaged to in 2005.

Totally digging all that lavender! But at the same time, this is such an unexpected trio. Nick Carter looks like he's up to something suspicious with that pose. Meanwhile, Monica and Britney Spears' faces seem to say, "What are we even doing here?" Maybe this would rank higher if the cover stars didn't look as confused as I currently feel.

That sequined shirt is everything. Note the coverline about "making the first move." Get it? Because she was starring in Save The Last Dance around this time. For that reference alone, this cover earns a spot on the list.

That lime green lettering definitely feels very early '00s — it was a go-to font color on my AIM away messages. Meanwhile, the "she may be on her own now" coverline is likely referring to her Barrymore's split from Tom Green. The two were married from 2001-2002.

Remember when Justin Timberlake went solo? It's cute to look back and see he was hoping to meet his "angel." Considering JT and Jessica Biel are totally smitten with one another, he foresaw his own future.

Mixed feelings about that pose and Harley-Davidson shirt, though. This probably would have ranked higher if he wasn't trying too hard to look like a tough guy.

The Olsen twins were the ultimate '00s icons, so that makes this cover a keeper. From Two of a Kind to New York Minute, their TV shows and movies were essential viewing.

Also, is Mary-Kate wearing a red, white, and blue bikini under her white zip-up? Stylish and patriotic.

This one makes me a little sad, but it's totally filled with nostalgia because it honors a legend. R.I.P. to Aaliyah, who shouldn't be remembered only for her music, but also her killer fashion choices.

As for Mark McGrath, I admittedly forgot Sugar Ray existed until seeing this photo. Now I'm going to listen to "Fly" ASAP.

Never forget Sisqo and his dragon necklace. I still cringe when I think about being in elementary school and singing along to "Thong Song," without even knowing it was all about underwear.

With his silver hair and bellybutton tattoo, everything about this feels like a true portrait of that time period. (Unsure whether that's a good thing, though.)

I'm forever a fan of Dream Street alum Jesse McCartney and his "beautiful soul." Notice how they chose to swing his tie to the side and unbutton his shirt just so? I guess it's all about aesthetics.

Eminem. Slim Shady. Marshall Mathers. No matter what you called him, the "Lose Yourself" singer was a staple in '00s culture. He's even wearing his signature white tank top.

Eminem's influence extended beyond the 2000s, since inspired some of today's top stars, including Ed Sheeran.

From those spiky bracelets to her tie, Avril Lavigne inspired tomboys everywhere to channel their inner sk8er girl. Although I admittedly was too shy to try those trends, I dug her music and unapologetic attitude.

She perfectly embodies the pop-punk trend that happened when half of my 7th grade classmates discovered Hot Topic for the first time.

"Californiaaaaa, here we come!" Mischa Barton, Adam Brody, Rachel Bilson, and Ben McKenzie look so young in this O.C. themed cover. All these years later, fans still reminisce about this show and rightfully so. From 2003-2007, it ruled the Fox TV lineup.

The "Clueless' star channels her inner Cher Horowitz in this shot. Considering that movie was such a classic, this Alicia Silverstone cover induces major nostalgia.

Another sign of the times? Jay Z still had a hyphen in his name.

Hilary Duff's jewelry looks like she just went on a shopping spree at Claire's. Her style may feel very 2000s, but the Lizzie McGuire star truly stood the test of time. She's just as popular now as back then, when she encouraged middle-school girls everywhere to ask their moms to take them bra shopping.

Plus, she was on the same cover that contained an "exclusive diary" from Good Charlotte. This was before she dated Joel Madden. How serendipitous!

Congrats to Teen People for rounding up the most random trio of all time! Definitely digging the BBQ theme, even though I'm utterly confused by why this is happening.

If you'll recall, P.O.D. sang that "Youth of a Nation" song, while Ashanti crooned "Mesmerize" with Ja Rule. As for Jay Z, he needs no introduction. I think it says a lot that these were the hottest stars of the summer.

I'm unsure what's going on with Christina Aguilera's shirt. Also, slightly perplexed by the necklace. But I love the coverline! She'll never outgrow the "genie in a bottle" label. Aguilera was one of the true divas of the '90s/'00s, who managed to make a lasting career for herself in the music industry.

OMG, remember Usher and his "U" necklace? With songs like "U Got It Bad" and "Confessions," he ruled the radio at the time. I'd also like to note that it's 10 years later and Usher looks exactly the same.

Plus, those cover line are great. "What's up with Josh Hartnett?" That question is still relevant. Nobody has seen that guy in way too long.

Back before Beyoncé was the solo star she is now, she had her girls Kelly Rowland and Michelle Williams by her side — for more than just Super Bowl halftime performances.

There was no better display of girl power in the early '00s than this trio, which is why they definitely cracked the top five on this list. They also were the queens of color coordination.

There's no denying that Britney Spears will always be the queen of pop. From the crimped hair to the outfit, this screams early 2000s — in the best possible way.

Also noteworthy? The "Carson Daly before TRL" story mentioned on the cover. Everybody's go-to after school hobby was crashing on the couch and watching that music video countdown (which Spears regularly appeared on).

I can't be the only one who misses the days when Nick Lachey and Jessica Simpson starred on Newlyweds. That "I heart Nick" baseball tee is simultaneously cheesy and amazing.

They were undeniably a power couple at the time and everybody's #relationshipgoals. Their love story may not have lasted, but it was magical while it existed.

I have so many questions: Was this Backstreet Boys cover taken after they jumped in the lake behind them? Is that why they're soaking wet? Is it just so that Howie's pecs can show through his shirt? If anything, they look pretty pissed that they had to be covered in water for this photo shoot, especially Brian.

Still, these guys deserve second place because they were one of the biggest boy bands of the decade. Also, with the outdoorsy background, it's just cliché enough to work.

You may disagree with this choice, but I'm an *NSYNC loyalist through and through. There's no arguing against those color-coordinated outfits. They really glow in all that yellow. Unlike BSB, at least they look happy to be on the cover.

Am I the only one who feels a bit emotional after that? Although *NSYNC's cover may be number-one on this list, they're all winners for inspiring a major wave of nostalgia.

For even more '90s nostalgia, check out the video below!

More like this
Britney Spears Met The Weeknd & Sam Levinson, So She May Actually Be On 'The Idol'
By Jake Viswanath
Britney Spears Thanks Fans After Miscarriage & Explains Why She's Writing A Book
By Jake Viswanath
Love Of Huns' Definitive Guide To A Seminal BRIT Awards Moment
By El Hunt
10 Eurovision Moments That Celebrate The Weird & Wonderful Camp Extravaganza
By Sam Ramsden
Get Even More From Bustle — Sign Up For The Newsletter