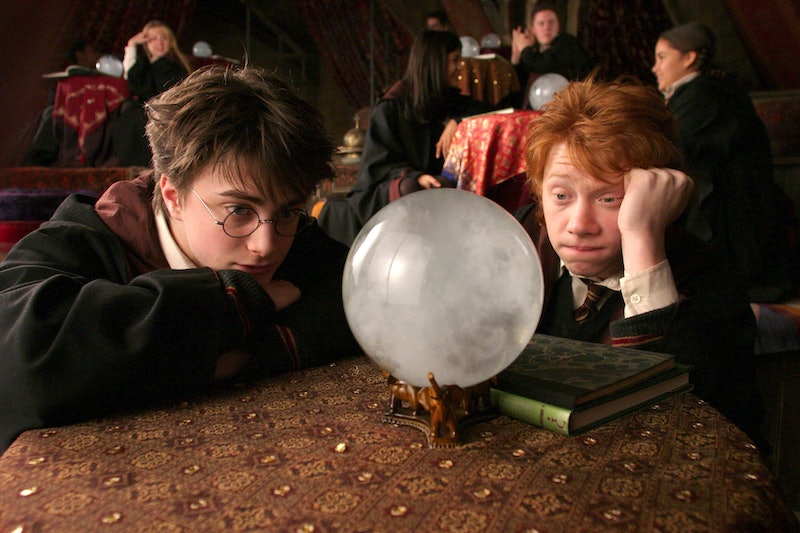 Though, in theory, it was good that J.K. Rowling was able to satiate our Harry Potter cravings with more new content than ever, there were more than a few financial, geographical, and possible emotional hiccups that came with said new content. Like, yes, in theory, a follow-up play to the books sounds just swell, but you weren’t able to flap your wings and fly to London to watch the canon-twisting tale that is Harry Potter and the Cursed Child. And, sure, it felt just like old times watching a Potterverse flick with the fam during Thanksgiving weekend downtime. But is Fantastic Beasts really as magical as spending time with the Golden Trio in Hogwarts Hollowed Halls? And those conflict emotions are just the tip of the iceberg.

With all due respect, we have notes for 2016's year in Potterdom... stress that usually came with full blown articles. Scroll down for the biggest emotional rollercoasters and tragedies Harry Potter fans encountered this year. Naturally, massive spoilers are ahead for both Cursed Child and Fantastic Beasts, though, come on. Do you need the warning?

2016 had no shortage of celebrity deaths, and that kicked off as early as January. Before anyone could even catch their breath about losing David Bowie, Rickman passed away at the age of 69 after a courageous battle with pancreatic cancer. It was hard enough losing Snape all those years ago, so it goes without saying that we miss Rickman and that deep, deliberate voice of his that made so many of us forget that Snape is, like, awful.

2. The American Wizarding School Has A Ridiculous Name

I guess this sounds trite considering how flatly undignified "Hogwarts" sounds out of context (also just about every other moniker in this series). However, U.S. Potterheads were already hurting from that No-Maj bombshell. "Ilvermony" is just cruel.

3. This Bombshell About Lupin's Death

As is tradition, Rowling apologized for the death of a Harry Potter fave on the Battle of Hogwarts anniversary. This year it was werewolf dreamboat Remus Lupin, and she tweeted that she didn't decide to kill Lupin until writing Order of The Phoenix, which felt like she brought him back into our lives only to break our hearts.

Honey, how many people had to die because you spared Arthur Weasley's life? When you said it was your reason for offing Sirius, it was enough of a stab, but I don't think it really qualified a Whedon-esque bloodbath. Also, not for nothing, but people would've gotten over the death of Arthur Weasley. I promise.

5. The Racist Reactions To Having A Black Hermione In Cursed Child

Technically, Noma Dumezweni's casting was announced at the tail end of '15. Yet, once official Cursed Child images started floating around, ignorance and misplaced rage flooded the internet. Of all the Cursed Child things to get upset about, that is now it. However, since we're on the subject...

6. The Awkward Release Of Cursed Child As A Book

After all the money you paid to see the play in England? Come on, now...

7. That 10-Year-Old Who Got To Review Cursed Child Before You

Back in my day, you'd have to wait outside Barnes and Nobles in a robe, but this lucky kid got an advanced copy to read off his iPad. Jealous.

Even if you can afford the flight to England, you still have to get into the show. Which is sold out through the end of 2017, so...

9. When Cursed Child Was Legit Back To The Future Part 2

The time-turner concept was complicated enough as it is back in Prisoner of Azkaban. Why do we have to have an entire play about it?

10. Albus Severus Is A Slytherin

In some ways, this presents an interesting narrative that sets up the end of the story. In other ways, like, why did he even have that conversation with his dad at the end of Deathly Hallows if he's just gonna go Team Snake? Like, Harry gave him the out. He told him what to say.

11. Scorpius Malfoy Is A Slytherin

OK, no. That kid is a Ravenclaw, and no one will ever tell me any different.

12. Bellatrix. Voldemort. Lovechild. What Even.

13. Albus's Crush On Delphi Is Worthy Of An Eyebrow Raise

Like, he's a literal child. And, if she's born sometime around the sixth book, that makes her approximately 23. Yikes.

14. Alternate Universe Hermione Had Some Issues

If we nitpick everything about Cursed Child, we'll be here forever. So, let's just acknowledge that the play suggested Hermione would become a sadistic spinster if she never ended up with Ron, because wow. No.

15. The Fact That We're Probably Not Going To Get A Cursed Child Movie Anytime Soon

Whether you loved it or whether it frustrated you and you have a hard time calling it canon, it would be nice to see the story played out somewhere that isn't... I don't know, upwards of $100 to get into.

16. The Earth-Shattering Reveal That Dean Thomas Was Almost Named Gary

17. Your Potter-Inspired Wand Make-Up Didn't Come Out The Way You Hoped

There was so much good eyeliner wasted in trying to recreate it.

18. You Basically Had To Re-Enroll In Pottermore To Find Out Your Patronus

I guess this doesn't apply to the hardcore fans who have clung onto the site from the get-go. I'm just saying I don't remember whatever variant of "Dragon12345" they assigned me like three years ago.

19. And Then You Ended Up Getting A Salmon

20. When The ebook Shorts Were Released And You Were Conflicted About Buying Them

I mean, they were just repackaged Pottermore articles. Which, whether you're still doing that or not, you can sort of easily retrieve off the internet grapevine instead of shelling out $2.99 a pop. Although, it's great that they organized it so nicely..

21. When It Was Announced Dumbledore Would Show Up In The Fantastic Beasts Saga

Apparently he's fond of Newt Scamander, and we know nothing else for sure. But we can guess. (Cough, Grindelwald, cough.)

22. But It'll Be A While Before We Reconnect With Any Of Our Old-Time Faves

Dumbledore's not popping up until the sequel. Is it 2018 yet?

23. When The Fantastic Beasts Posters Came Out And Those Haircuts

The debate rages onward on whether or not this had any kind of negative effect on the hotness of Ezra Miller. (My answer: no.)

24. When The Movie Actually Came Out The General Consensus Was Pretty Much, "Yeah, It Was Great, But Not Harry Potter Great"

25. And When Rowling Announced That There Was Going To Be Five Movies Total And You Were Like, "What."

Even the most hardcore Potterhead heard that and thought, "How are you going to expand a 128 page novelty book into a 10+ hour long franchise?"

26. When We Found Out Johnny Depp Was Cast In Fantastic Beasts

If this was a decade ago, then, yeah, it would've been a teen dream. But, in 2016, after Depp's contentious divorce from Amber Heard, this is just uncomfortable. And then we found out he'll have an expanded role in future films. But then we found out exactly who he's playing in the film. And then we actually saw him in the film. ...basically, this one was one huge rollercoaster ride from start to finish.

27. And, IRL, Voldemort Was Elected President Of The United States

28. Plus, We Now Know What House Jacob Kowalski Would Be In... At The School He Doesn't Remember

Not that he could have gone, even if he did remember. My heart, guys.

2017 may have us getting untangled from that Whomping Willow, though, as it promises even more Harry Potter things to have conflicting feelings about. Stay strong, my fellow witches, wizards, and... No-Majs.

More like this
The 'Hocus Pocus' Sequel Finally Has A Release Date & It Makes Total Sense
By Shannon Barbour and Radhika Menon
At 14, Jenny Han Wrote Rom-Coms About Her Friends & Fan Mail To Leo DiCaprio
By Alyssa Lapid
Lauren Rae Is Bringing Back The Sex And The City Vibes In Her New Memoir
By Shahed Ezaydi
S Club 7’s Jon Lee Continues To Reach For The Stars
By Rachel Mantock
Get Even More From Bustle — Sign Up For The Newsletter