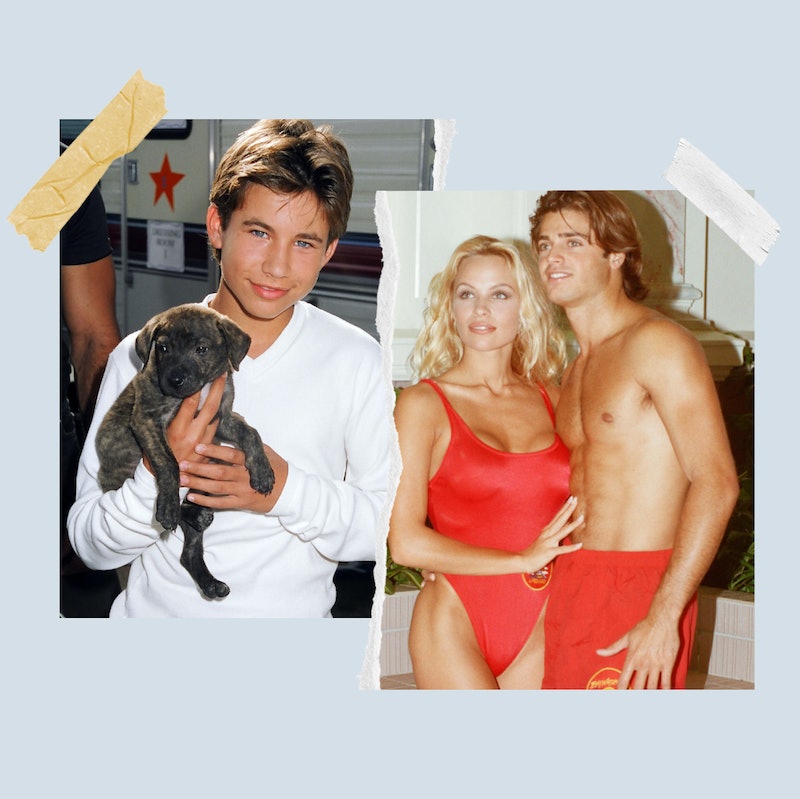 Think about your favorite ’90s show. Now imagine showing it to someone who did not live through the ’90s. There is a good chance your favorite sitcoms would be totally baffling to anyone born after 1998. Between the vintage technology, the iconic yet questionable fashion, and the dated social themes, so many ’90s shows — just like ’90s movies — would make no sense today. That doesn’t make them any less awesome, but it does make them artifacts from a bygone era of landlines and oversized sweaters.

From Clarissa’s amazing style to Mulder’s very specific ’90s conspiracy theories, the decade is full of shows that were very much a product of their times. This is an era of television that produced a very successful series about a man with a local access home improvement show. Do local access shows even exist anymore? And if they do, does anyone besides your great uncle watch them?

In the world of Instagram, iPhones, and prestige TV, the ’90s shows of yore cannot help but seem as if they came from another planet sometimes. While the classic shows of the ’90s defined a generation, they still look weird through modern eyes. Here are 20 ’90s shows that just would not make any sense today.

Home Improvement is remembered fondly for introducing the world to teen heartthrob Jonathan Taylor Thomas, but the show celebrates stereotypical masculinity in a way that is completely foreign today. Tim “The Tool Man” Taylor was a macho chauvinist who loved cars, sports, tools, grunting, and injuring himself by adding “more power” to everything. Add in the part where Tim was the host of a popular public access TV show aimed at satirizing PBS’ This Old House and you have the perfect recipe for a show that is super confusing by today’s standards.

I’m not saying no one worries about the environment anymore, but I am fairly certain anxiety levels over pollution were never higher than they were in the ’90s. Enter Captain Planet, an environmental superhero, and his squad of kid helpers, who saved the world from litter and oil spills. Somehow, I can’t imagine kids today being quite so enthralled by Captain Planet’s deep environmental concerns.

Clarissa Darling will forever be my life coach, but all it takes is a look at a single frame from the show to understand why, despite her timeless wit and wisdom, Clarissa would instantly baffle modern society. What is up with her clothes? Look at the massive computer. Why do her parents let a boy just enter her room via ladder whenever he wants? The questions are endless.

The X-Files may have been revived in 2016, but even the reboot felt like a show displaced in time. While people will always distrust authority, ’90s paranoia was very specific to a decade on the brink of a new millennium. Before the internet became a fact of modern life, the idea that the authorities could be guarding one massive secret instead of lots of tiny ones that could be released by skilled hackers seemed eerily plausible. Also, everyone was obsessed with aliens. The world is a very different place, and while The X-Files will always be one of the greats, it now has the ability to confuse youngsters who find it on Netflix.

Imagine explaining Wishbone to someone who had never seen it. “So, it’s this show about a highly literate Jack Russell terrier who imagines himself as the lead in classic novels. And it was for children, who actually enjoyed watching a show about a dog who moonlighted as Silas Marner and Don Quixote.” Sounds crazy, right?

For ten seasons from 1993 to 2004, Kelsey Grammar starred as Frasier, a successful psychiatrist with a radio show who can somehow afford a swanky Seattle apartment. Today, Frasier would maybe have a podcast that’s only popular among a certain niche and have to live with six roommates just to get by (and none of them would take him that seriously).

Remember the feeling of coming home from school every day, calling into Total Request Live, and requesting to see Britney Spears’ “Oops!… I Did It Again” video … again? TRL had an iconic ten-season run, but MTV’s 2017 revival ended up failing because it’s completely nonsensical in the YouTube age, where you can watch every Britney video ever with one click. Also, what is a Carson Daly?

Ren & Stimpy was one of the first three original Nickelodeon cartoons, premiering in August 1991 alongside Rugrats and Doug. Like those classics, it was 100% intended for an audience of children. However, the series was so chocked full of grotesque gags and sexual innuendos that it would make parents today faint on the spot. The fact that it got away with those jokes for five seasons is a mystery.

Back in 1994, Tia Landry and Tamara Campbell accidentally discovered they were twins at the mall and decided to spend the rest of their childhood together. Today, Sister, Sister wouldn’t have happened at all because they would have found each other on Instagram before they were 9 years old and chosen not to live together, much to the relief of their bickering parents. Why bother moving houses when Skype and FaceTime are a thing?

Back in the ’90s, every family in America may have loved seeing the Winslow family put up with the zany shenanigans of Steve Urkel, as lovingly portrayed by Jaleel White. But watching the show today, his antics — which often endangered the Winslows — are totally creepy. It makes zero sense that the family didn’t file a restraining order to keep Steve out of their house.

Baywatch lasted 11 whole seasons primarily because men enjoyed watching the female characters, specifically Pamela Anderson, run down the beach in bodyguard bathing suits. Seriously, almost every ’90s sitcom references this phenomena at some point. This is one show that actual television fans would be completely startled by today because there is no real plot to speak of, as evidenced when the 2017 spinoff film received five Razzie nominations.

TV today is so aggressively serialized that it would be hard for anyone to just roll with the idea that young teenagers were able to leave their houses and dive deep into the woods to tell scary stories once a week without any of their parents noticing. Also, how did these kids even meet? Modern curiosity makes the wonderfully creepy Are You Afraid of the Dark? a hard sell — especially since the Midnight Society could just meet up online and have members spanning the globe.

After a truck drenches her in an unknown chemical on her way to school, Alex Mack developed uncontrollable powers and decided to keep it a secret from everyone but her two best friends. Today, the whole “secret” part seems impossible. In the internet age, her abilities would have been discovered immediately, Alex would have gone viral and become an Instagram influencer, and the big evil corporation’s practices would have been exposed by a hacker in no time.

The Nanny became one of the most heartwarming and replay-able ’90s sitcoms ever because everyone wanted Fran Drescher to be their nanny (or wife, if you were Maxwell Sheffield). But looking at the show through a 2021 lens, name one person who would hire a nanny that has no prior experience with kids and wrote her references with lipstick simply because she showed up at their door selling cosmetics. I’m waiting.

Otto Rocket and his expert skateboarder friends are so impressive that in real life, they would be followed by fans and reporters every day, have millions of Instagram followers, and likely get their own reality TV show. However, for four seasons, the actual Nickelodeon cartoon just showed the gang dealing with the usual challenges of being a teenager while casually showing off their Olympic-level excellence, and the town of Ocean Shores gave zero f*cks.

Shelby Woo was a teenage intern at her local police department who managed to crack more cases than the employed detectives themselves through the course of this show’s four seasons. Today, she’d be hailed as the next Nancy Drew. Instead, she simply coasted by solving her mysteries, earning the ire of her bosses and even her own grandfather, who didn’t want her getting involved in cases.

How did a family-oriented show get away with fat-shaming, misogyny, and the most crude jokes for so long? Today, Married... With Children would have to choose between being family-friendly or politically incorrect if they wanted the show to have a chance. Somehow, it became TV’s longest-lasting sitcom ever in 1997, with a whopping 11 seasons, and remains one of the most popular ’90s shows today.

Guts was basically Nickelodeon’s version of Fear Factor before Fear Factor even became a thing in 2001. On the competition show, kids performed high-intensity physical challenges that only Olympic champions (or at least consenting adults) should be qualified for. It was wildly entertaining, yes, but there are very few kids who would be willing to take on these challenges today — and even fewer parents who would let them.

Johnny Bravo is a blonde-hair, blue-eyed man who still thinks its the 1950s and attempts to pick up a new girl every episode by basically pretending to be Elvis Presley. Girls today would find that pathetic and laughable, and everyone else would be straight-up bored. However, the Cartoon Network series still lasted four seasons, meaning someone didn’t get bored of Johnny failing to impress women.

Yes, Friends lasted ten seasons, became one of the highest-viewed TV shows of all time, and transcended generations of viewers because it remains one of the most relatable series to this day. Even the 2021 Friends reunion single-handedly attracted more subscribers to HBO Max. But how were Rachel, Monica, Joey, and Chandler able to pay for spacious two-bedroom apartments right across from each other in New York’s West Village while working at low-wage jobs, or often no job at all? That’s just not realistic today.

These are just a few of the ’90s shows that just wouldn't make much sense today. However, most of them are still totally amazing TV as long as you forget texting and the internet are things that exist.

This article was originally published on Aug. 1, 2016