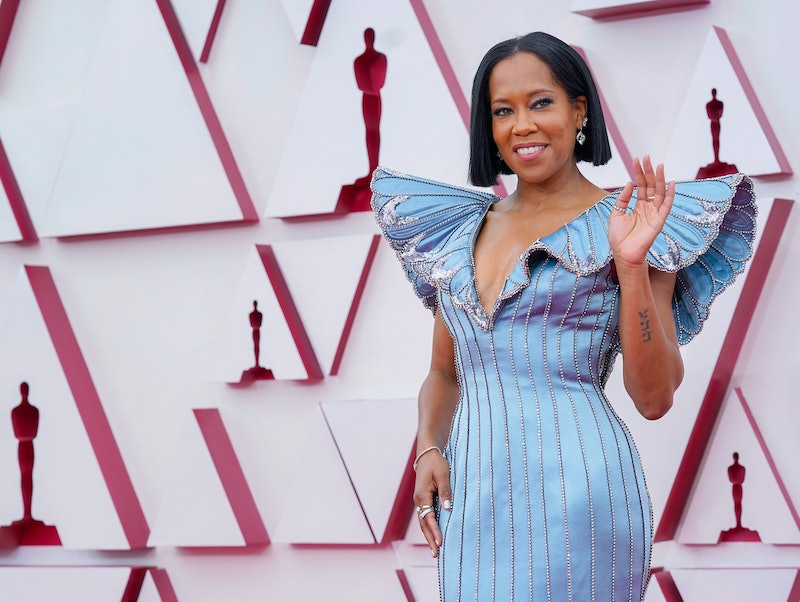 Viewers of the 2021 Oscars are in for a number of firsts tonight, including awards season’s biggest night taking place within downtown Los Angeles’ Union Station for the first time ever. More than a year into the COVID-19 global pandemic, celebrities are stepping out from the comfort of their sanitized homes into the California sunshine to attend the star-studded affair in socially distanced fashion. After watching the partially virtual 2020 and 2021 Golden Globes and the shorter and pre-recorded 2021 SAG Awards during the height of the pandemic, tonight’s Academy Awards program is a welcome change. Ahead of the biggest award categories of the night, which highlight Minari and Grammy-nominated recording artist Andra Day, viewers are already taking to social media to comment on and celebrate the most memorable scenes from this evening.

One of tonight’s best red carpet looks comes from Minari actor Alan Kim. Judging from his #instaworthy Oscar photo on Instagram, the precocious 8-year-old is not only a Critics’ Choice Movie Award winner but also a fashion star in the making. Many on social media commented on Kim’s chic tuxedo and cheerful personality, as seen on the red carpet.

Regina King’s Oscars entrance was bookmarked by a sultry, confident power walk to the podium, captured via long shot. Once the One Night in Miami helmer made it to the stage, she got into her Oscars speech, stating that if the Derek Chauvin verdict had ended differently, she would have traded in her heels for “marching boots.” King stayed flawlessly in step, even after slightly tripping onstage, and viewers enthusiastically took notice.

Laura Dern’s dress caught the eyes of onlookers as she made her way on the red carpet. Divisive insight about the Big Little Lies performer’s feathery gown was shared on social media, with individuals either loving, sharply disliking, downright confused, or highly amused by Dern’s dress. “Really hoping that Bjork is hiding under Laura Dern’s dress and pops out for a showstopper,” wrote one Twitter user. Journalist and writer Liza Donnelly called it a “magnificent dress,” while another Oscar watcher likened the lower part of Dern’s dress to a “Furby” doll.

Daniel Kaluuya, or for those who remember him as Posh Kenneth on Skins UK, earned the Best Supporting Actor Oscar for his striking turn as Black Panther Party Chairman Fred Hampton. Daniel’s speech struck a chord in the hearts of all those who watched as the British performer cried and thanked God onstage. But his comment about his parents having sex on Oscars day sent Twitter ablaze. His wry statement also left his sister and mom, who attended the show live from London’s British Film Institute, confused.

Chloé Zhao became the second woman in Oscar history to win the Best Director award, and the honor left many on social media praising the rising star. Her Oscar win also caused some to remember fellow Asian film director Bong Joon-Ho, who won the Best Director Academy Award in 2020 for Parasite. In addition, the Nomadland director’s sneaker game also caught the attention of viewers.

Brad Pitt was making a splash on Twitter moments before even arriving onstage to present the Oscar for Best Supporting Actress. Once he did and handed the award to Minari actor Yuh-Jung Youn, all was well within the Twitterverse. Fans made sure to compliment the 57-year-old actor/producer’s handsome looks at a feverish pace, as well as the Oscar winner's commitment to shooting her shot.

The Oscar for Best Documentary Feature went to My Octopus Teacher, a film about a diver/filmmaker’s touching bond with an octopus. The New York Times called the documentary “one of the most beloved documentaries to win at the Oscars in recent years,” but others on social media did not sound as convinced. Twitter was also aghast that the accompanying acceptance speech made no mention of the actual octopus from the movie.

In a fun segment with Lil Rel Howery, Andra Day and Glenn Close both shocked audiences with their bleeped-out reactions to Howery’s music questions. Day sang Prince’s “Purple Rain,” and Close closed out the mini-quiz break with her knowledge of the “Da Butt” song and dance by shaking it to the 1980s cult classic.