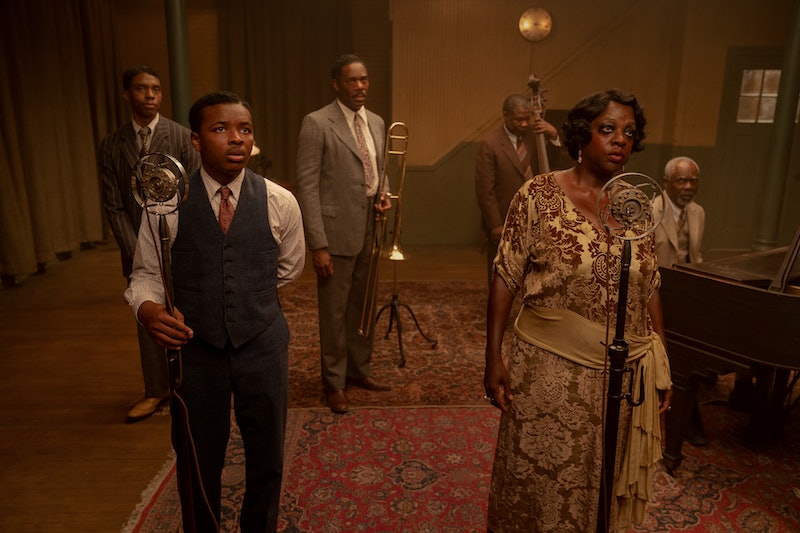 After a year in which movie theaters closed and release dates were delayed, Priyanka Chopra and Nick Jonas announced nominations for the 2021 Oscars in March, ahead of the 93rd Academy Awards ceremony on April 25. David Fincher’s Mank led the nominations, scoring 10 nods in categories including Best Picture, Best Actor for Gary Oldman, and Best Supporting Actress for Amanda Seyfried. Following close behind, six films — Nomadland, The Father, Judas and the Black Messiah, Minari, Sound of Metal, and The Trial of the Chicago 7 — tied for the second-most nominations, earning six nods each. In preparation for the Academy Awards, you may be wondering how to watch the 2021 Oscar-nominated movies from the comfort of your own home.

Luckily, everyone’s living room has become a screening spot during the COVID-19 pandemic. Whether binge-watching the latest Netflix series or streaming a new Disney movie, it’s never been easier to access award-nominated content. This year, Netflix had a record-breaking showing in the Oscar nominations, with 35 nods and two Best Picture contenders. Movies streaming on Hulu, Amazon Prime, and Disney+ were similarly recognized in multiple categories. Of course, Warner Bros. made headlines last December when they announced all of their 2021 releases would be available in theaters and on HBO Max at the same time.

Ahead, here’s how to watch 16 of the year’s biggest films before the 93rd Academy Awards air on ABC.

How To Watch Minari

Despite the Golden Globes nominating it in the Best Foreign Language Film, Minari tells a distinctly American story. It depicts one Korean-American family's journey to an Arkansas farm in the 1980s in search of the all-elusive “American Dream.” Come for 8-year-old Alan Kim’s scene-stealing performance, stay for Youn Yuh-jung’s moving portrayal of Grandmother Soonja. Yuh-jung was nominated in the Best Supporting Actress category, and the film picked up five other nods — including Best Picture, Director and Original Screenplay for Lee Isaac Chung, Actor for Steven Yeun, and Original Score.

How To Watch Mank

David Fincher’s 10-time Oscar-nominated film was a bit of a family affair, as it’s adapted from a script by Jack Fincher, the filmmaker’s late father. The movie delves into 1930s Hollywood and the writing of Orson Welles’ Citizen Kane by screenwriter Herman J. Mankiewicz (Gary Oldman). It could clean up in various categories, including Best Picture, Director for Fincher, Actor for Oldman, Supporting Actress for Seyfried, Cinematography, Original Score, Production Design, Costume Design, Original Score, and Sound.

How To Watch Judas and the Black Messiah

The Black Panther Party takes center stage in this biopic, which tells the story of FBI informant William O'Neal (Lakeith Stanfield) and his complex dynamic with Chairman Fred Hampton (Daniel Kaluuya). Both Stanfield and Kaluuya were nominated in the Best Supporting Actor category. The film itself got noms for Best Picture, Original Screenplay, Cinematography, and Original Song for H.E.R.’s “Fight for You.”

How To Watch Nomadland

Frances McDormand could receive her third Oscar following wins for Fargo in 1997 and Three Billboards Outside Ebbing, Missouri in 2018. She stars as Fern in the Chloé Zhao-directed Nomadland, which explores the alluring nature of a woman’s nomadic existence. McDormand is also nominated as a producer in the Best Picture category for Nomadland. Meanwhile, Zhao is a four-time nominee in the producing, directing, original screenplay, and film editing categories. The movie’s cinematography was also nominated.

How To Watch The Father

Academy Award winners Anthony Hopkins and Olivia Colman lead this six-time Oscar-nominated drama about a father and daughter. As he slips further into dementia, she tries harder to capture a few more lasting moments with her father. In addition to nominations for Hopkins and Colman, The Father was recognized in the Best Picture, Adapted Screenplay, Film Editing, and Production Design categories.

How To Watch Promising Young Woman

Perhaps the best pitch for this movie is the image of Carey Mulligan (Cassie) and Bo Burnham (Ryan) dancing through a convenience store to Paris Hilton’s “Stars Are Blind.” But there’s a much darker revenge story just beneath this film’s candy-coated surface, thanks to the script and direction by Killing Eve’s Emerald Fennell. Both Mulligan and Fennell picked up Oscar nominations for their contributions in the Best Actress and Picture, Director, Original Screenplay categories, respectively. Promising Young Woman could also win in the Best Film Editing category, which rounds out its five nominations.

How To Watch Sound of Metal

Prior to his first Oscar nomination in the Best Actor category, Riz Ahmed earned widespread awards recognition for his portrayal of Ruben Stone, a heavy metal drummer who is suddenly losing his hearing. The film also earned praise in five other categories, including Best Picture, Supporting Actor for Paul Raci, Original Screenplay, Film Editing, and Sound.

How To Watch The Trial of the Chicago 7

Aaron Sorkin’s reign as master of the courtroom drama continued, as he scored six nominations for his latest historical drama. The film has an eerie relevance to current events, as it depicts the power of peaceful protests and the larger forces that will work to silence them. Chicago 7’s nominations are in the following categories: Best Picture, Best Supporting Actor for Sacha Baron Cohen, Best Original Screenplay for Sorkin, Best Film Editing, Best Cinematography, and Best Original Song for “Hear My Voice.”

How To Watch Another Round

This under-the-radar Danish film scored two major Oscar nominations on Sunday morning, including Best International Feature Film and Best Director for Thomas Vinterberg. In it, Hannibal’s Mads Mikkelsen stars as a man who begins binge-drinking with his friends as a quasi-life experiment.

Both Viola Davis and the late Chadwick Boseman were recognized for their performances in this historical drama, based on a play by August Wilson. Boseman’s role as Levee, the horn player to Davis’ “Mother of Blues,” is his final film role, for which he won a posthumous Golden Globe for Best Actor in February. Other categories where Ma Rainey’s Black Bottom could win include Best Production Design, Makeup and Hairstyling, and Costume Design.

How To Watch Borat Subsequent Moviefilm

Sacha Baron Cohen’s return to his titular Kazakh journalist character was secretly filmed across the country just before the pandemic. In addition to two Oscar nominations, including Best Adapted Screenplay and Best Supporting Actress for Maria Bakalova, the movie made major headlines for its pranks. Who could forget them interrupting Mike Pence’s speech at the Conservative Political Action Conference and interviewing Rudy Giuliani?

Watch on Starz, or with a premium Hulu or Amazon Prime subscription

How To Watch Hillbilly Elegy

Glenn Close scored her eighth Oscar nomination in the Best Supporting Actress category for her role in this Ron Howard-directed biopic. (Close also got a Razzie nomination for the same performance.) Although she has yet to win a statue, the film has been controversial since its November 2020 release, which could impact Close’s odds. Then again, her transformation as the iron-willed Mamaw is... something.

How To Watch One Night in Miami

What would a conversation between Cassius Clay, Jim Brown, Sam Cooke, and Malcom X about being a Black man in America look like? That’s the question at the center of Regina King’s film directorial debut, which earned three Oscar nominations, including Best Supporting Actor for Leslie Odom Jr. as Cooke, Adapted Screenplay, and Original Song for Odom Jr.’s “Speak Now.”

How To Watch The United States vs. Billie Holiday

How To Watch Soul

It wouldn’t be the Oscars without the nomination of a tearjerker Pixar movie. Enter Soul, which stars Jamie Foxx as a man who reevaluates his life after dying and entering The Great Before. The film got three nominations, including Best Animated Feature Film, Best Original Score, and Best Sound.

How To Watch Pieces of a Woman

More like this
The 'Love, Lizzo' Harry Styles Scene Is Just 1 Moment That Made Fans Feel Seen
By Brad Witter
Here’s Everything Coming To & Leaving Netflix In December
By Jake Viswanath
Then Vs. Now Photos Of The 'Enchanted' Cast In 2007 & The Sequel's Stars In 2022
By Marina Watts
Twitter Is Very Torn About The Winner Of 'Dancing With The Stars' Season 31
By Jake Viswanath
Get Even More From Bustle — Sign Up For The Newsletter