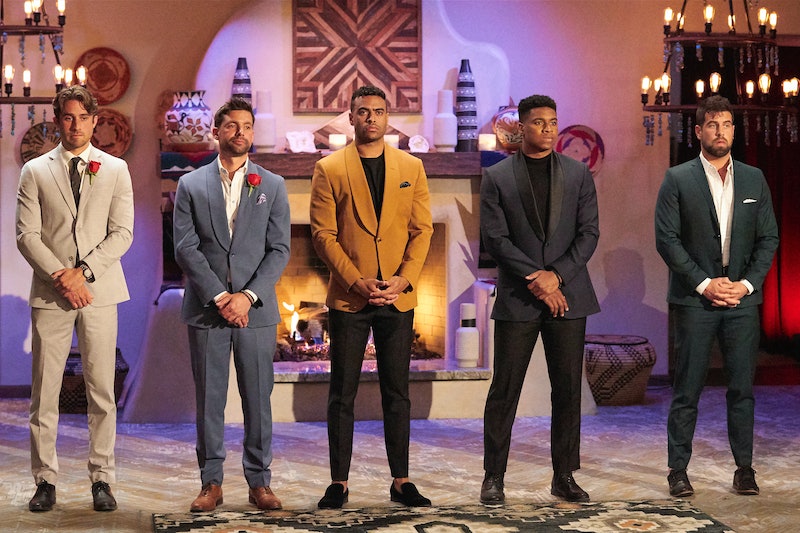 A Bachelorette season is only as good as its suitors, and Katie’s had its fair share of great men. Though there was plenty of debate about who was truly there for the right reasons, a number of her contestants have been floated as contenders to be the next Bachelor. But they’re far from the only ones in the running: there are also the men from Clare Crawley and Tayshia Adams’ joint season of The Bachelorette to consider, plus any standouts from Bachelor in Paradise and Michelle Young’s season of The Bachelorette.

“Sometimes the pond is really dry — this season will be the opposite case. The pond is overstocked,” ABC executive Rob Mills told Variety of choosing the next lead in January. He added that truly anyone could take on the role in 2022. “One of the lessons we’ve learned is to really think of everybody to potentially be the Bachelor,” he said. “In the past, I think we’ve maybe made mistakes because we’ve overlooked people for whatever reason — maybe they’re too controversial or they weren’t that popular on their season, but there is no right or wrong so we should just talk to everyone and the right person will present themselves.”

According to The Hollywood Reporter, the right person already has. On Sept. 9, the outlet reported that Season 26’s Bachelor will be a new contestant from Young’s upcoming season, so we haven’t even met him yet. Further, E! News reported that an on-set photo from a supposed promo shoot may have solved the mystery behind the unknown Bachelor, now rumored to be 28-year-old orthopedic sales rep Clayton Echard. Known for his spoilerific Bachelor and Bachelorette posts, blogger Reality Steve jumped on Twitter to offer some skepticism but somewhat corroborate E! News’ findings with a picture of Echard. “We’ve seen them in the past shoot intro videos for people who didn’t end up getting the lead role, but based on last weeks news, and now these pics, looks like Clayton Echard is going to be the next Bachelor,” he tweeted.

ABC hasn’t confirmed the news, though, so, in the meantime, Bachelor Nation’s guesses are still fair game. Though a yet-to-appear contender is looking more and more likely, here’s everyone else fans thought had a shot at being the Bachelor — whether it’s this season or sometime soon.

A single dad from Ohio, Michael Allio wasted no time in enrapturing Bachelorette fans on Katie’s season. After losing his wife to cancer, he arrived on the show open to the idea of finally finding new love. He had a pretty immediate connection with Katie, charming her on their first date by asking for consent to kiss her and often making moving statements about the preciousness of love and time. Viewers also got to see Michael in dad-mode in brief segments where he’d FaceTime his son. But ultimately, it was his responsibility as a parent that caused Michael to leave the show. He told Katie that he felt he was spending too much time away from his son and could no longer stomach the distance. The heartbreaking exit only further fueled fans’ desire to see him as the next lead.

Andrew stood out on Katie’s season by intentionally avoiding drama. Early on, several of the other men took it upon themselves to call out contestants they felt were disingenuous, leading to the elimination of Karl, Thomas, and Hunter. Andrew didn’t want to be involved in any of it, instead trusting Katie to make her own decisions. His and Katie’s relationship blossomed from there, until, in a surprising turn of events, she sent him home in Week 7. Not one to leave on bad terms, Andrew returned to Katie’s hotel room the next day with a note that read, “If you change your mind, I’ll be waiting.” This prompted Katie to chase after him. The two shared a final kiss, and Katie even floated the idea of Andrew staying longer, but having already suffered one heartbreak, Andrew thought it best to leave. Since his elimination, fans have rallied around Andrew, and his cousin Clay Harbor — a fellow Bachelorette alum — kicked off a Bachelor campaign.

It’s hard to explain just how obvious it seemed that Greg would end up with Katie. He won the first impression rose, had two one-on-one dates, and Katie even told him that her “biggest fear” was him leaving the show. The two bonded over the deaths of their respective fathers, imbuing their relationship with a sense of vulnerability and understanding. Unsurprisingly, Greg made it to hometowns, taking Katie on a New Jersey-themed date during which his family revealed they’d never seen him so happy and in love.

But when Greg later admitted to Katie that he loved her, their relationship unraveled. She couldn’t confirm to him that he would be her final pick, leading Greg to doubt how strongly she actually felt. The next day, he came to Katie’s hotel room to inform her he’d decided to go home, leading a distraught Katie to lock herself in the bathroom. Though Greg had been a fan favorite since practically the moment he stepped out of the limo, this led some viewers to turn on him, calling his final conversation with Katie — in which he rarely allowed her to speak — emotionally manipulative. This could hurt his chances at becoming the next Bachelor, though as Mills said, they’re open to someone who’s controversial.

Justin’s place in Katie’s top two came as a bit of a surprise. For most of the season, it seemed like he was going to be remembered for his phenomenal facial reactions above anything else. However, he and Katie clearly had a stronger connection than viewers saw. They shared a faux-wedding date as well as a Baltimore-themed jaunt around the New Mexico desert for Justin’s hometown, the latter of which is most notable as it relates to Justin’s Bachelor prospects. His parents elected not to meet Katie, which garnered him a large amount of empathy from viewers. Overall, Justin has shown himself to be an expressive, comedic, and thoughtful contestant capable of leading his own season, and heartbreak has proved to be the best runway to becoming Bachelor.

Ivan Hall made a name for himself on Tayshia’s season as a lovable aeronautical engineer. Not only did he attempt to eat an ungodly amount of ice cream, he had candid conversations with Tayshia about incarceration and racism that pushed the franchise outside of its usual white conservative-catering bubble. His emotional reunion with his brother during his hometown date also illustrated Ivan has the heart and sensitivity needed to be the Bachelor. He’s set to appear on the upcoming seventh season of Bachelor In Paradise, which could either make or break his chances depending on how his journey shakes out.

A Harvard grad with a love for loafers and scarves, Bennett initially came off as pompous. But his affinity for self-care quickly established him as a fan favorite on Tayshia and Clare’s season. Since filming, he’s made an abrupt pivot from New York finance bro to aspiring cowboy, as evidenced by the plethora of rustic-style photos populating his Instagram. Like Ivan, Bennett will hit the beach for BiP Season 7, which could position him perfectly to become the next Bachelor.

Obviously, it’s too soon to say definitively who will next take the lead, but ABC typically makes the announcement sometime in September. Assuming they don’t wait until after Michelle’s season to break the news, it shouldn’t be more than a couple of weeks until we find out which man will be the Bachelor in 2022.

This article was originally published on Aug. 9, 2021