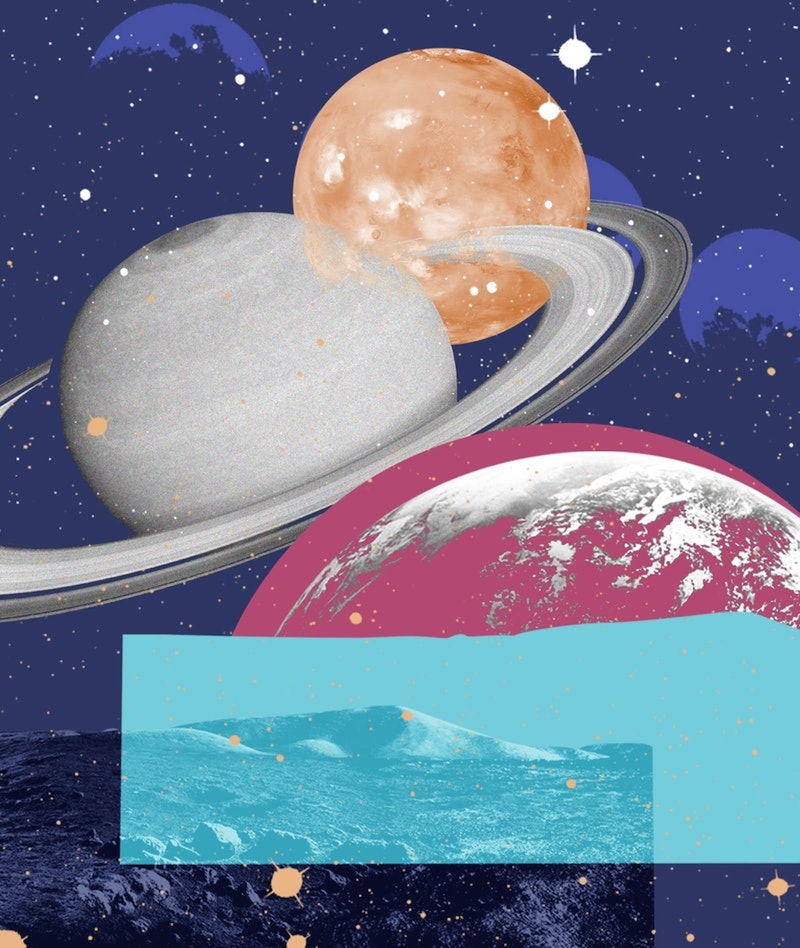 Happy new year, cosmic cuties! The overall astrology of 2022 has us buzzing with the excitement of a fresh start — and the relief that the past year’s planetary drama is now behind us. But the cosmos aren’t wasting any time getting things moving in January, as the whole first month of 2022 is packed full of planetary action, from New Year’s Day ‘til the very end.

In order to get a feel for January’s overall vibe, let’s rewind to the latter half of December, which brought about some significant planetary shifts that set the tone for the month ahead. Venus retrograde began on Dec. 19 — a transit that lasts through Jan. 29 and has us digging beneath the surface of our love lives while rehashing relationship dramas. Then the sun entered Capricorn, kicking off Capricorn season, the bulk of which takes place in January. And finally, just days before the New Year’s Eve, Jupiter enters Pisces, where it’ll stay until May 2022 and light up our luck.

January’s spicy planetary action delivers lots more twists and turns, too. We’ve got lots of Capricorn energy happening, which enables us to start 2022 with a grounded and pragmatic mindset that’s perfect for slaying New Year’s goals. An exciting new moon on Jan. 2 adds some motivation to the occasion, while a sentimental full moon on Jan. 17 asks us to release all those heavy feelings that are pent-up beneath the surface. Mercury retrograde is swooping in mid-month to throw a wrench in our mental groove, but Aquarius season will still come through to bring us lot of fresh and futuristic ideas. Plus, we can look forward to both Uranus and Venus retrogrades ending before January is over.

That’s just the tip of this astrological iceberg, baby. Ready for your January 2022 astrological overview? Read on.

Capricorn is the zodiac’s cardinal earth sign, and Capricorn season 2022 dominates the first three weeks of the year. No-nonsense Capricorn season highlights our hardworking sides and focuses us on building solid foundations for our goals — so it’s a fabulously disciplined energy to carry us into a new year. Alongside the sun is Venus retrograde in Capricorn, which amplifies the down-to-earth vibes and asks us to get serious about our values.

The Capricorn energy really peaks on Jan. 2, during the first new moon of 2022. At the time of this powerful lunation, the sun and moon will align in Capricorn and send out a lucky trine to unpredictable planet Uranus, which inspires us to keep an open mind as we set solid goals for the coming year. It’s a great time to manifest and focus on your tangible needs.

While Capricorn season may end on Jan. 19, this cardinal earth sign’s energy won’t be done with us yet. Jumping ahead toward the end of the month, we have action planet Mars entering Capricorn on Jan. 24, making us extra efficient and plan-oriented about how we conquer our goals. Instead of taking wild risks and shortcuts, we’re more likely to stick to tried-and-true methods that ensure we get what we want, even if means putting in some extra work. One day later, communicative Mercury — which at this point will be retrograde — will re-enter Capricorn, giving us a second chance to review the New Year’s plans we made during the final days of 2021.

Mental planet Mercury lives up to its busy-body reputation this month, as it swiftly kicks off the planetary action by switching signs, entering airy Aquarius on Jan. 1 PT/ Jan. 2 ET. In Aquarius, Mercury puts a focus on communicating with friends, thinking unconventionally, and working toward shared goals in a collaborative way.

However, the forward-flowing motion comes to a screeching halt on Jan. 14, when the first Mercury retrograde of 2022 begins. This retrograde starts off in Aquarius, then backpedals into Capricorn, where it’ll moonwalk through the rest of the month. Instead of focusing on future plans, this period is better spent reviewing the stability our recent decisions and paying closer attention to the way we interact with the people around us.

A Cathartic Full Moon On Jan. 17

With so many planets currently clustered in down-to-business Capricorn and aloof Aquarius, the January 2022 full moon in sensitive water sign Cancer will feel refreshingly cathartic — but pretty intense, too. The full moon is opposing transformative planet Pluto, which could bring about deep emotional revelations and crisis points. However, a positive connection to the Nodes of Destiny also makes this a powerful moon for letting go of the past and paving the way for a more aligned future.

The Shifting Of The Nodes

On Jan. 18, the North and South Nodes — also known as the lunar nodes or Nodes of Destiny — will switch signs for the first time since 2020, entering Taurus and Scorpio, respectively. The North Node represents our fate and collective direction in life, while the South Node represents lessons we’ve learned and things we need to leave behind. In Taurus and Scorpio, we’ll be learning how to let go of our need for power and control while embracing our values and finding comfort in new ways.

This nodal shift also aligns with the new set of eclipses that will be taking place on the Taurus/Scorpio axis of the zodiac throughout 2022 — but thankfully, we don’t have to deal with that until April.

The Fresh Breeze Of Aquarius Season

On Jan. 19, the sun will leave get-sh*t-done Capricorn to join mental Mercury and serious Saturn in the quirky realm of Aquarius. This solar ingress officially kicks off Aquarius season 2022 and generally feels like a zodiacal breath of fresh air. Aquarius season’s forward-thinking energy allows us to take the practical plans we made during Capricorn season and give them an unorthodox, out-of-the-box spin. It also inspires us to connect with friends and engage with our communities — even if Mercury retrograde attempts to muddy up our social plans.

The End Of Uranus & Venus Retrogrades

We may have to deal with Mercury retrograde’s antics, but at least the latter half of the month also brings us the end of two planetary retrogrades. On Jan. 18, wild-child planet Uranus ends its five-month-long backspin. This direct motion propels us into a period of collective change and unexpected shifts, so we’ll want to keep an open mind as we move forward.

We’ll then close out the month with the end of Venus retrograde on Jan. 29. After six long weeks of backspinning, the love planet will finally swing back into her usual groove, allowing us to charge ahead on matters of romance, money, and beauty. Because Venus will still be in its post-retrograde shadow into February, take things slow and give yourself time to process the adjustments and realizations you made during the backspin.

A Rare “Black Moon,” Depending On Your Time Zone

If you’re in the pacific time zone, then technically, the second new moon of the year will occur during the final hours of January, which makes it a “black moon” — a term that refers to the second new moon to occur in a calendar month. This new moon, which takes place in futuristic Aquarius, peaks at 9:46pm PT on Jan. 31 / 12:46am ET on Feb. 1, meaning it straddles the line between one month and another. Regardless of your location, this new moon is a gorgeous opportunity to set hopeful intentions and embrace your most unconventional wishes as we wrap up the first month of a new year.

More like this
Here’s Your Astrological Forecast For February
By Nina Kahn
Here’s Your Daily Horoscope For February 1, 2023
By Mecca Woods
These 3 Signs Are The Master Chefs Of The Zodiac
By Kristine Fellizar
When Is The Next Full Moon? Your 2022 Calendar
By Nina Kahn and Brittany Beringer
Get Even More From Bustle — Sign Up For The Newsletter
From hair trends to relationship advice, our daily newsletter has everything you need to sound like a person who’s on TikTok, even if you aren’t.