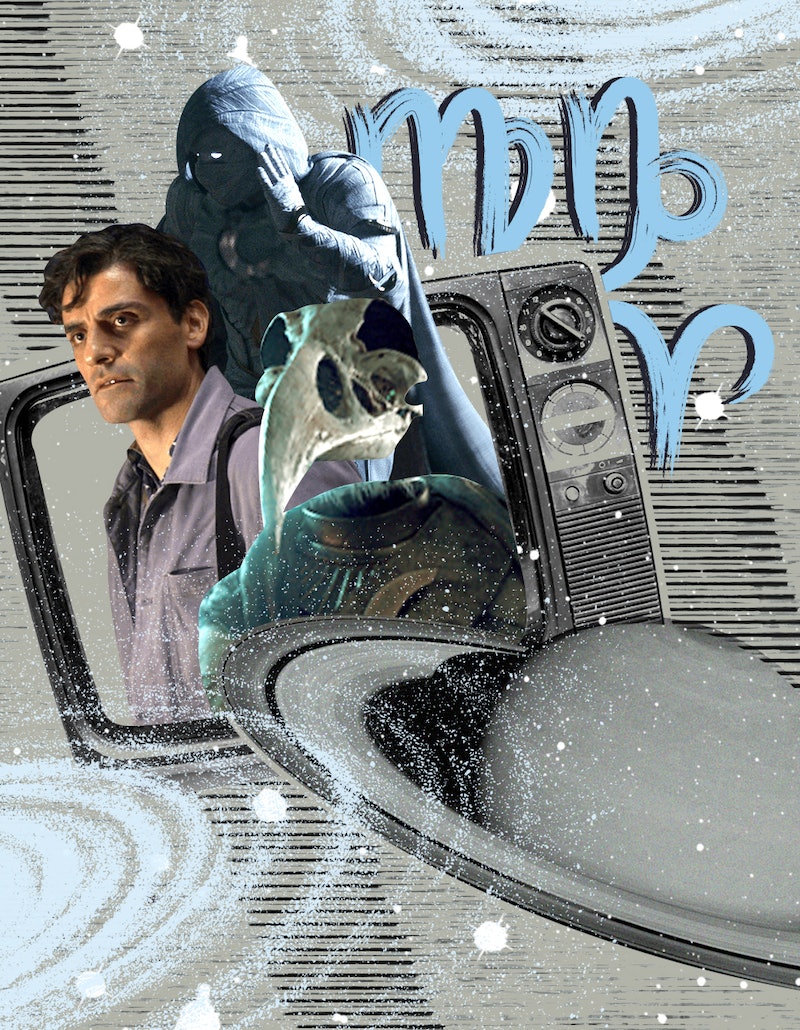 Marvel's latest superhero franchise, Moon Knight, premiered on Disney+ on March 30, and it's totally different from the hero-in-cape stories you’re used to. Moon Knight follows the story of Steven Grant, played by Oscar Isaac, an introverted museum gift-shop worker with dissociative identity disorder. Steven discovers that he’s been living with two distinct alter personalities: Khonshu, the unforgiving Egyptian god of the moon, and Marc Spector, a former mercenary who is Khonshu’s human avatar. Steven reluctantly has to learn to share his body with Marc and Khonshu, whom only he can see or hear, so that he can save humanity from the resurrection of Ammit, the merciless goddess of divine retribution.

As an astrologer and avid Marvel fan, I think the best way to make sense of Marvel’s latest antihero is to explore the sun sign of each personality that makes up Moon Knight. Steven is an intellectual and reclusive Londoner, who I’m confident is a Virgo zodiac sign due to his cautious nature. Enigmatic Marc Spector, on the other hand, is both goal-oriented and emotionally guarded and thus a total Capricorn. Despite being the Egyptian god of the moon, the luminary that rules Cancer, authoritative and ego-driven Khonshu gives off major Aries vibes: He’s impatient, demanding, and hell-bent on getting his way. Together, these three personalities that embody Moon Knight represent his three dimensions: Steven as the brains of the operation, Marc as the brawn, and Khonshu as the driven and ruthless leader.

Read on for my case on this superhero’s sun signs.

Steven, A Virgo, Is Knowledgeable & Altruistic

Steven is a British museum worker who spends his time studying hieroglyphics and venting to a street performer (who, as a human statue, can’t respond). He lives a life of solitude, choosing to keep his mind stimulated through French literature and Rubik’s cubes. As a Virgo, he’s ruled by Mercury, the planet of mindset and communication. Natives of this sign aren’t typically social butterflies, which explains why Steven’s only friendship is with someone he can’t converse with. However, Virgos are highly logical and have a rep for being perfectionists. For example, in Episode 1, Steven has an issue with sleepwalking. He concocts a system of bungee cables to keep him under the sheets, and when that doesn’t work, he puts sand by the foot of his bed to track where he’s going. (Of course, we later learn that Marc has been taking control of his body at night to carry out Khonshu’s bidding, but Steven doesn’t know that.)

Mercury’s emphasis on communication also makes Virgos highly intelligent and motivated by intellectual discovery. In Episode 3, Steven, Marc, and Marc’s wife, Layla, voyage from London to Egypt to find Ammit’s tomb. Initially, Steven is reluctant to support Marc on a violent mission to stop Ammit’s followers from resurrecting her, but he can’t contain his excitement at being whisked into the heart of the Great Pyramid of Giza. Though he’s frustrated at Marc, who’s taken control of the body in order to give the mission the greatest chance of success, his anger subsides as he takes in mystical sights of the historical landmark. What’s more, Marc ultimately has to enlist Steven’s help in the mission, as he’s the only one with enough knowledge of Egyptology to piece a map together. Virgo suns have a wealth of knowledge that they don’t hold back on sharing, and with their natural altruism, they can’t help but be of service to those who need it.

Marc, A Capricorn, Is Calm Yet Controlled During Chaos

Marc is a ex-soldier who is tormented by the fact that he was chosen by Khonshu to become his avatar — a human body that the god resurrected to inhabit and observe happenings on Earth. As a Saturn-ruled Capricorn, he’s defined by his responsible and pragmatic approach to the tasks Khonshu asks of him, diligently fulfilling his mission on the promise that he’ll be released from the role. The fact that Capricorn is also a cardinal sign, meaning the first of its season in the zodiac, imbues Marc with a drive to lead — which usually manifests in wanting to take control over his and Steven’s shared body.

Capricorns often venture off independently to avoid allowing others to hold them back from succeeding, and Marc embodies this trait throughout the series. In Episode 2, Steven discovers a mysterious key and a cellphone in a hidden cabinet in his flat and links the key to a nearby storage unit. Inside, he discovers what looks like a bunker, with a sleeping cot and a duffel bag brimming with money, guns, and a passport — Marc’s passport, with Steven’s photo. “You weren’t supposed to see any of this,” Marc says to Steven. As a determined and practical Earth sign, Capricorn thrives when they feel in control and prepared for life’s challenges, and Marc’s secret bunker is a private home base for taking care of Khonshu’s to-do list. Though some might consider a Capricorn’s seriousness to be a negative, their realism and maturity are what give them their ready-for-anything attitude.

Khonshu, An Aries, Is Rebellious & Dominating

Khonshu is the Egyptian god of the moon who also declares himself the god of justice. Ruled by passionate and combative Mars, Aries have a signature courageous spirit, sharp sense of right and wrong, and a penchant for making their own rules. True to his sun sign, Khonshu is loud and proud about being independent from the rest of the Egyptian gods. For example, in Episode 2, he condemns the goddess Ammit, whose M.O. is delivering divine retribution: She judges and disciplines people for crimes they will commit in the future. Khonshu tells Steven, “I only punish those who have already done harm. I am real justice.” Like a true Aries, Khonshu has a competitive streak, and is determined to do Ammit’s job in ways which seem fairer to him.

Khonshu is unafraid of the rest of the Egyptian gods’ wrath and even tests them with his dramatic behavior — a classic Aries move when the fire sign wants to prove a point. Despite the gods’ agreement to avoid meddling in human affairs, Khonshu repeatedly breaks the rules. In Episode 2, he bullies Marc, his avatar, into doing his bidding by threatening to sentence Layla to the same torment if he doesn’t comply. Later, in Episode 3, he boldly sends the gods “a sign that they can’t ignore” by darkening the entire sky. Afterward, Osiris, the god of the afterlife, reprimands Khonshu: “Manipulate the sky again and we will imprison you in stone.” As an Aries, Khonshu won’t let anything stand in his way, even if that means putting his needs ahead of others’ and playing with fire without considering the consequences. The punishment he’s faced in the past — banishment from the human realm — still isn’t enough to teach him a lesson.

Three (or more?) personalities come together to become Moon Knight — a motivated hero who uses his superhuman abilities and combat skills to protect the vulnerable and serve justice to those who cause harm. Steven, the intellectual Virgo; Marc, the practical Capricorn; and Khonshu, the assertive Aries, each have vastly different personalities, but their unique skills enable them to form a well-rounded antihero.