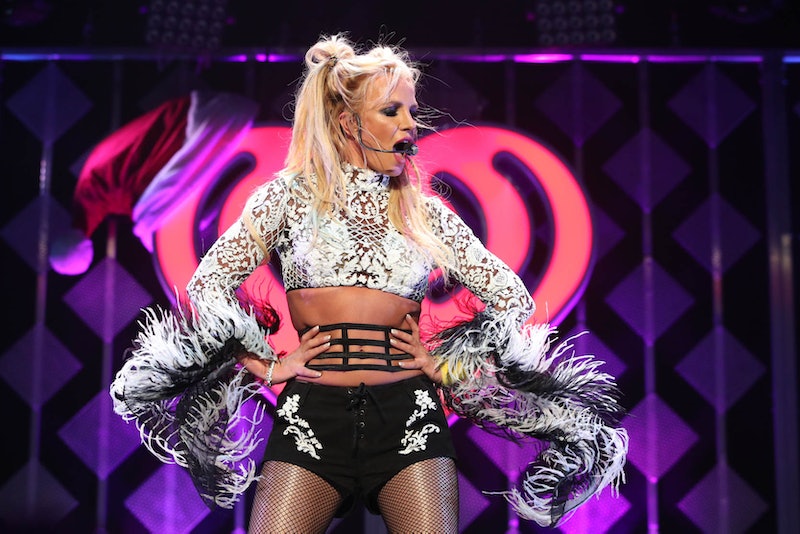 While the calendar may have said 2016, this year felt reminiscent of an entirely different decade. From reunions featuring your favorite bands to the return of childhood games, 2016 was filled to the brim with '90s nostalgia. Given the fact that certain current events felt tough to stomach, the lightness of the good ol' days definitely provided its fair share of comfort. But is 2016 the most nostalgic year yet? It doesn't take Harriet the Spy's skill set to conclude that it's been the biggest blast from the past in recent memory.

For instance, did you ever expect Britney Spears and Justin Timberlake to make headlines again? Or what about shows from your youth making a resurgence? Whether in mini specials or reboots, '90s TV made a major comeback this year, and it was like a holiday gift that arrived early.

Don't get me wrong, 2015 was a nostalgia fest of its own. That was when Jimmy Fallon brought the Saved By The Bell cast back together, and Clueless celebrated its 20th anniversary. Even 2014 had its share of '90s-ness when Boy Meets World got its Girl Meets World revival and Lifetime took a dive into The Unauthorized Saved By The Bell Story . This trend has literally been years in the making, since it was in 2011 that Nickelodeon launched The Splat to play your old TV faves.

But, in my opinion, 2016 beats the other years by far. Let's take a closer look at why '16 deserves the ultimate nostalgia trophy.

For JT and Brit-Brit shippers everywhere, it was a dream come true when Spears confessed she'd love to record with Timberlake. He even said he was game. While no music with Timberlake has arrived yet, the possibility was enough to make fans hearts flutter. Plus, Spears did release a new album in 2016, aptly titled Glory. In an August interview with Ryan Seacrest, Spears explained how she poured a lot of herself into the album and said, "I took my time with this project. It’s kind of like my baby. I took it very seriously."

Cue even more girl power: In the summer, the Spice Girls brought things full circle in honor of the 20th anniversary of their song "Wannabe." They released a thank you video and promised a bigger surprise on the way. Three of the ladies — Geri "Ginger" Halliwell, Emma "Baby" Bunton, and Melanie "Scary" Brown — joined forces to create GEM, and a song from the trio reportedly leaked. It's since been removed from online, but cross your fingers for more from these three in the near future.

And that's not all. The Backstreet Boys announced an upcoming Las Vegas residency, because what happened in the '90s doesn't have to stay in the '90s. The "I Want It That Way" singers even got fans excited a little early with a surprise performance at the iHeartRadio Festival in September. This felt way more substantial than when *NSYNC reunited (sort of) at the 2013 MTV VMAs. If you're still bitter about the fact that there wasn't a full-blown reunion, at least 2016 gave us the glorious photo above of the guys at JC Chasez's 40th birthday. They haven't aged a bit, huh?

In 2016, some major series from the '90s got a second wind and found success in doing so. Thanks to the beauty of Netflix, the Tanner family took on new life on Fuller House , even getting renewed for a second season to air in December of this same year. Sure, 2015 was when the Full House reboot was announced, but it didn't air until this year, making for peak nostalgia.

Meanwhile, sci-fi fans got a revival of The X-Files with six episodes airing on Fox. Proving how eager fans were, the X-Files reboot premiere garnered even more viewers than the original show's finale. Impressive, no? And while 2014 started the Boy Meets World revival, Girl Meets World continued well into 2016 as the rest of Season 2 and the beginning of Season 3 aired. The show has only continued to get more popular, making a new generation love Cory, Topanga, and Riley.

There also were a few game shows from the '90s that surfaced in new form in 2016, which segues perfectly into the next category.

Remember the days of watching Double Dare and other Nickelodeon game shows on the couch as an elementary-schooler? The aforementioned competition celebrated its 20-year anniversary with a special that aired the day after Thanksgiving. Then, a few days later, Legends of the Hidden Temple got a movie version. Yes, the 1993-1995 game show where teams competed to find temple artifacts and put together the Shrine of the Silver Monkey was brought back as a film.

Speaking of games, Pokémon made a major resurgence in the form of an iPhone game: "Pokémon Go." Emphasizing just how popular it became, Starbucks even unveiled a "Pokémon Go" Frappuccino. The original Game Boy game first launched in in 1996, yet, based on this year's hype, you would have thought it was brand new. Oh, and Britney Spears threw her sons a Pokémon themed party. Because, of course.

It was in 1994 that Leonardo DiCaprio received his first Oscar nomination for What's Eating Gilbert Grape? It may have taken two decades, but 2016 is the year DiCaprio actually won his Oscar for The Revenant. It was entirely worth the wait, as he gave an inspiring speech about the environment.

Another seemingly full-circle moment? Rachel Green reigned supreme. OK, Jennifer Aniston is worthy of more than her Friends name at this point, but it felt like déjà vu since she was crowned People 's Most Beautiful Woman in 2016. There's no denying she was a major pop culture icon in the '90s when everyone wanted her haircut. And, all these years later, her poise and humility are as enviable as her locks.

Add Mandy Moore to the list of comebacks. Her first single, "Candy," came out in 1999, but this year was all about her acting. Moore earned a Golden Globes nomination for her role on This Is Us. It feels full-circle to see her owning the spotlight again.

So, is 2016 the most '90s year of all? Well, of course, nothing can top the actual decade. But compared to past years, it appears to be the most nostalgic yet. Overall, there was a resurgence of '90s themed projects across a variety of genres — from music to game shows to other TV reboots. Even some of the decade's big stars (like Moore and the Tanner family) made a comeback, having yet another well-deserved moment in the spotlight. The list above should serve as substantial proof of the powerful presence of the '90s.

While more exciting things are in the works for next year (like new Baywatch and Beauty and the Beast movies), 2016 holds the crown... for now. Because, come on, nothing beats Spears in all her glory.