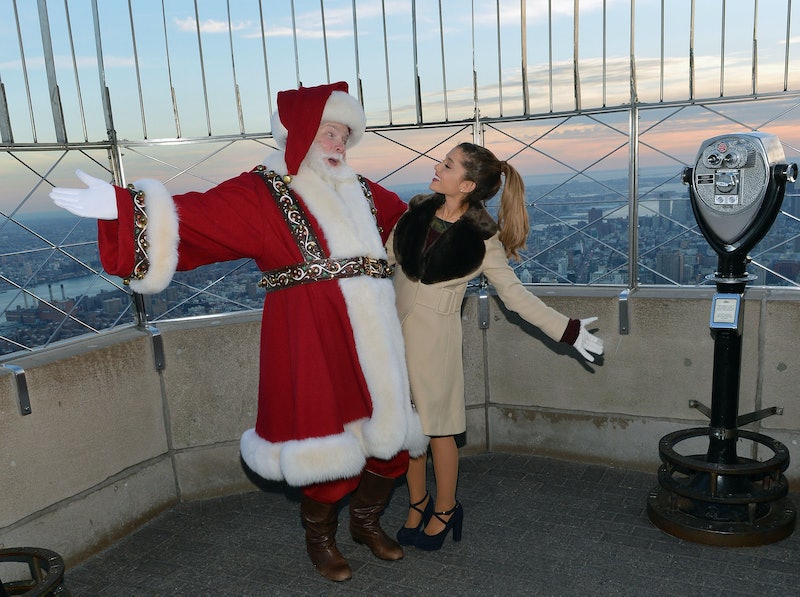 When the holidays approach and the weather turns cold, there are those tunes that everyone is thrilled to hear once again. Carols, covers, and classics rule the season, but don’t believe anyone who says all the best Christmas songs were created a long time ago. Every year, some of the biggest names in the music world release new compositions that help make December even merrier, and while not every tune works well, there are plenty of examples of stars who have gifted the world with excellent yuletide smashes in just the past decade or so.

READ NEXT: 12 Best Covers Of “All I Want For Christmas Is You”

The latest generation of holiday-enthused artists followed in the footsteps of the likes of Bing Crosby, Darlene Love, Wham!, and the Jackson 5 to earn their places in the annual music rotation. Some, like Taylor Swift and Ariana Grande, have devoted entire albums to the most wonderful time of the year. Others, like Katy Perry and Tyler, the Creator, have only dabbled in seasonal music. All of them, however, have given us beautiful hits that make Christmas — and our holiday playlists — merry and bright.

Here are 14 of the best modern Christmas songs by current pop stars.

Ariana Grande has quietly released two Christmas EPs, and while neither one of them has hit the same highs as her full-lengths, there is one song that stands out as her biggest seasonal smash. The pint-sized powerhouse vocalist scored a somewhat surprising win with “Santa Tell Me,” which eventually broke into the top 20 on the Hot 100. The low-fi music video only further highlights that while she usually has a massive budget to rely on, she has the star power and charm to carry a tune and a clip all on her own.

Britney Spears - “My Only Wish (This Year)”

One of the oldest tracks on this list, Britney Spears’ “My Only Wish (This Year)” is nearly a classic this point. In fact, give it a few more years and it will surely become a proper holiday standard. First released in 2000 as part of Jive Records’ Platinum Christmas compilation, the tune is featured alongside festive cuts by the likes of the Backstreet Boys, Christina Aguilera, Joe, Monica, and countless other stars of the day. Spears co-wrote this production, which helps it stand out from much of her discography.

An updated take on the famed “12 Days of Christmas” song, Destiny’s Child’s “8 Days of Christmas” is certainly fun, but a few of the items that Kelly, Michelle, and Beyoncé mention do seem a bit dated by now. In the tune, the women receive gifts like a diamond belly ring, a crop jacket, and “a gift certificate to get my favorite CDs” (what’s a CD?). It is a bit wild to look back and see Queen Bey in such a commercial production, as her musical direction has changed quite a bit since this single was released in 2001.

Gwen Stefani & Blake Shelton - “You Make It Feel Like Christmas”

The first of three songs the now-married couple has released, “You Make It Feel Like Christmas” serves as the lead single and title track from the former No Doubt star’s first holiday album. The singers sound great together, but Stefani definitely does most of the work in the video, pulling off old Hollywood glamour while her country musician beau adds the comedy.

Just months after they re-formed and returned with their massive comeback single “Sucker,” the Jonas Brothers dropped a new seasonal tune, “Like It’s Christmas,” and fans rushed to make it a hit as well. The song nearly broke into the top 40 on the Hot 100, which is incredibly uncommon for modern Christmas cuts. The track is so easy to love that it’s not hard to see why they recorded another for 2020, “I Need You Christmas.” Will the sibling trio give their followers another smash for 2021? The world can only hope.

It’s difficult to believe that Justin Bieber has a Christmas song that is now a decade old. How is that possible? The singer jumped into the holiday game pretty quickly, as Under the Mistletoe was his second proper full-length, and it became the extremely rare new Christmas album that goes right to No. 1. Lead single “Mistletoe” peaked at No. 11, and it’s probably the only yuletide tune ever written that uses the word “shawty” and still somehow comes off as jolly.

Yes, Kanye West has a Christmas song, and it’s actually really good. The tune interpolates a number of hits from the past, which gives it a nostalgic feel. It features Teyana Taylor singing the chorus and a rapped verse by CyHi the Prynce, and the three come together to create something so unexpected and so lovely. Released in 2010, the single never quite received the praise it deserves, but it is easily one of the best hip-hop holiday songs ever.

If there is one pop singer who should record a Christmas album, but who hasn’t yet, it’s Katy Perry. With her whimsical sound and style, she would create something spectacular — and just imagine the outfits and music videos that would come out of that project! The superstar has thus far only released one merry jingle, and it shows that she has what it takes to brighten the season. “Cozy Little Christmas” is everything the world has come to love from Perry, and if the elves someday deliver, it will just be the first of many tunes in this space from the chart-topper.

Kelly Clarkson - “Underneath The Tree”

Kelly Clarkson’s Wrapped in Red is largely considered to be one of the best Christmas albums in recent memory. Since it was released in 2013, the set has become a classic, and no song on the title’s track list is more beloved than “Underneath the Tree.” It’s upbeat, it jingles, it jangles, and it features the American Idol winner’s signature powerhouse vocals. While her other holiday releases haven’t quite matched the heights she achieved on this smash (and no, My December isn’t a Christmas album), Clarkson’s carol is sure to be played for many years to come.

Released the same year as Clarkson’s Wrapped in Red, Leona Lewis’ Christmas, With Love is also an excellent holiday record, but American audiences largely missed the production. For those who aren’t very familiar with the X Factor champion and her work (how have you not heard “Bleeding Love”?), “One More Night” is the song to try first. The single is another perfect demonstration that great Christmas songs are still being created these days.

Throughout their years together, Run DMC broke barriers and made history in countless ways, but many people, even some of their biggest fans, often overlook their foray into the holiday music space. “Christmas in Hollis” is simultaneously funny, cheerful, catchy, and authentic to who the musicians are and where they’re from. Decades after the band released the tune, it’s still uncommon for hip-hop acts to produce Christmas music, and they were one of the first names in that space to do so successfully.

One of the most sought-after songwriters in pop, it’s not surprising that Sia’s first venture into making music for the most wonderful time of the year is incredibly melodic and ultimately unforgettable. Everyday Is Christmas is fantastic from top to bottom, and while it’s difficult to pick just one song from the collection, “Candy Cane Lane” is a certified bop. Fellow album tracks like “Santa’s Coming for Us” and “Snowman” are also particularly excellent.

Throughout her decade-and-a-half as a superstar, Taylor Swift has explored a lot of genres, succeeding with hits that can be classified as country, pop, rock, alternative, hip-hop (sort of), and even holiday. Early on in her career, the Grammy winner dropped her EP The Taylor Swift Holiday Collection and it went platinum, even though it doesn’t contain the best Christmas tune she’s ever shared. In late 2019, she surprise-released the single “Christmas Tree Farm,” which recounts her time as a child spent on, appropriately, a Christmas tree farm, as well as a recent vacation with loved ones.

Tyler, the Creator - “I Am The Grinch (Ft. Fletcher Jones)”

The studio behind the latest animated retelling of Dr. Seuss’ The Grinch took a huge risk when they recruited rapper Tyler, the Creator to write and record original songs for the film. He was certainly an odd choice, and one that surely had many scratching their heads when the development was made public, but somehow it works. His gruff, deep voice perfectly matches the mood the character embodies, and while the bulk of his recorded material would not be suitable for children, this tune is fun for the whole family.

More like this
Selena Gomez Reacts To TikTok Users Who Say She Shaded Hailey Bieber
By Grace Wehniainen
The Very Best Quotes From Dr. Taylor Swift’s NYU Graduation Speech
By Grace Wehniainen
Taylor Swift Is "Spiraling" After Releasing "This Love (Taylor's Version)"
By Jake Viswanath
Britney Spears Set A Wedding Date With Fiancé Sam Asghari & Previewed Her Dress
By Bustle Editors
Get Even More From Bustle — Sign Up For The Newsletter