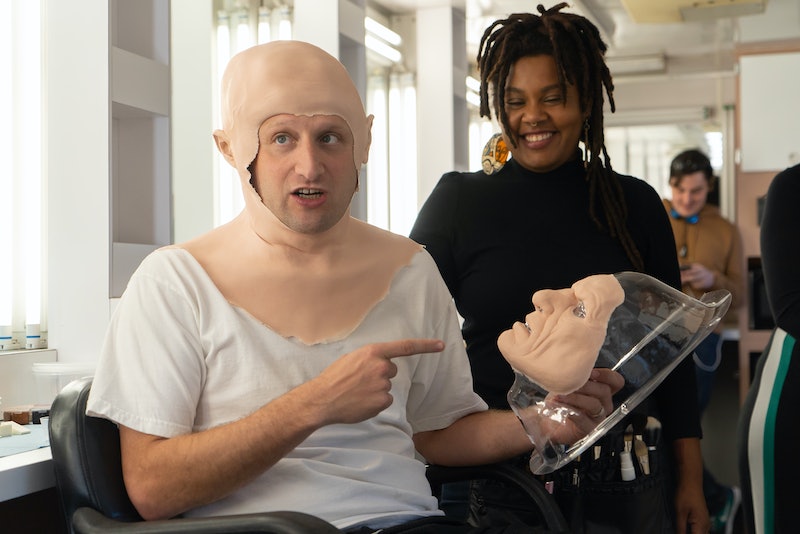 What happens when you get sketch show veterans together in a comedy series way more raucous and absurd than they’re used to? A 100% rating on Rotten Tomatoes, apparently. The second season of the hilarious Netflix sketch comedy I Think You Should Leave With Tim Robinson aired Tuesday, July 6, and was met with critical acclaim.

With long-time colleague and co-writer Zach Kanin, Tim Robinson created the absurd show after their Saturday Night Live and Detroiters projects together. (Kanin directs, Robinson acts.) Each episode’s under-17-minute run stitches together a few sketches — some of which involve choking on a hotdog, a nervous breakdown in a mall food court, and Santa Claus’ career pivot from gift-bearing delivery man to action star. Most episodes feature at least one weirdo (usually Robinson) who makes everyone in the scene uncomfortable and leaves those in the audience with second-hand embarrassment. You know the type: those whose social barometers don’t work and who should be asked to, well, leave.

Fans are calling the heavily-memed show “absolutely hilarious” and even made some “cry actual tears” and pull a neck muscle from laughter. (You’ve definitely seen the meme with Robinson in a hotdog costume and captioned, “We’re all trying to find the guy who did this.”) After blowing through all six episodes of Season 2, fans are now asking: Will Netflix renew I Think You Should Leave for Season 3? Here’s everything to know so far.

The I Think You Should Leave Cast

The hilarious cast is a patchwork of comedic heavyweights who’ve worked together or starred on the same sketch show. Robinson, the brain, heart, and soul of the show, invited many of his fellow SNL alums to appear, including Vanessa Bayer (Trainwreck), Cecily Strong (Ghostbusters), and Will Forte (The Last Man on Earth). The Walking Dead star Steven Yeun and Brooklyn Nine-Nine’s Andy Samberg also appeared in Season 1.

Season 2 newcomers include John Early (Search Party), Paul Walter Hauser (Cruella), and another SNL alum Bob Odenkirk (Breaking Bad). Patti Harrison (Shrill), who appears in two episodes in the second season, told GQ, “It's the thing that I get recognized for the most. People will scream "Santa brought it early" to me in public. It’s pretty aggressive.”

Some guests and favorites from Season 1, including Harrison’s Shrill co-star Connor O’Malley and Sam Richardson (Veep), also came back to render their comedic talents to the show’s second run. If and when Season 3 is announced, there’s a good chance viewers will see many guest stars return along with other comedic powerhouses. Perhaps O’Malley’s wife and Shrill co-star Aidy Bryant will even join.

The I Think You Should Leave Season 3 Release Date

There’s no word yet if the show will be picked up for a third season, but based on the show’s past schedule, it takes a couple of months for Netflix to announce if there will be a follow-up. It doesn’t seem like Netflix would sleep on the show’s stellar ratings — even Season 1 garnered a ridiculously high 96% on Rotten Tomatoes. Plus, fellow comedians gave the show a virtual thumbs up. On Twitter, Seth Meyers, a long-time Robinson colleague, posted about the show saying, “I laughed so hard I thought I was going to choke on my own tongue.”

Other fans, who’ve been waiting patiently for the second season, took to Twitter to wax poetic about the show, with some even calling it the “funniest show ever made.”

A brave and confident fan tweeted at Netflix saying, “@netflix announce season 3 of I Think You Should Leave you cowards.” Seconded.

This post will be updated as more details about Season 3 are released.