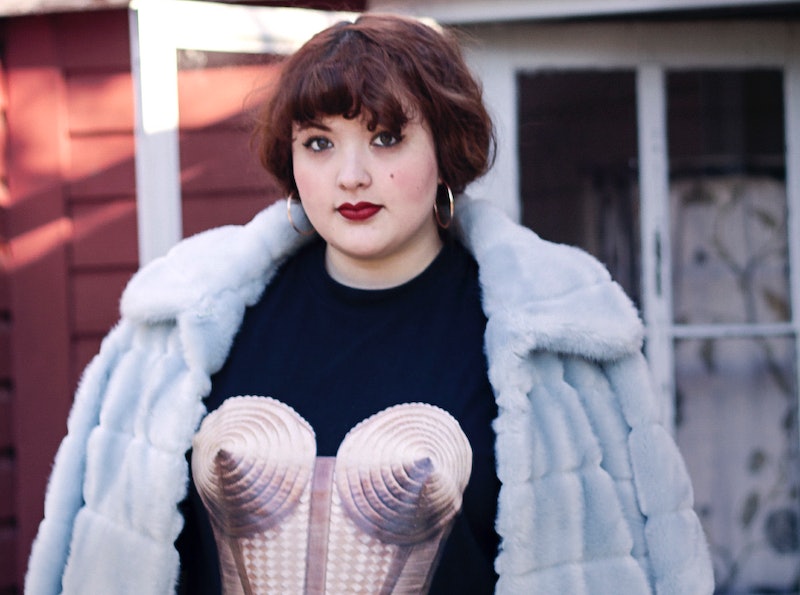 Although I would be hesitant to say that we've experienced a total "body positive revolution" since most Millennials were children, I am a firm believer in the celebration of progress. Mass political and cultural change don't tend to happen overnight unfortunately, and the more ingrained a means of oppression is, the longer it likely takes to deconstruct. But acknowledging the wins along the way is how I personally keep myself from losing hope. Such is the case when I consider the body positive advancements for women that we've seen in fashion and media this last decade or so. On International Women's Day — a holiday meant to celebrate the progress women have made on the road to gender equality — it feels especially important to shout-out how far we've come.

There are plenty of body positive issues we still need to talk about and fight for, including the intersection of weight and healthcare, or weight and rates of conviction. As for fashion, it's only scratching at the surface when it comes to inclusivity in all facets of the industry — from the models chosen to sell the clothes to the size ranges actually sold. But back in 1999, we didn't really talk about these things. Fat activism existed, as it has since the 1960s and probably before. Body image warriors were around, too. However, public consciousness surrounding these topics wasn't anywhere near as poignant as it is today. So in celebration of women and their many incarnations, here's some very cool stuff that's happened since we were kids.

1. The Inclusion Of Transgender Women In Fashion & Entertainment

Women like Hari Nef, Janet Mock, Laverne Cox, and Caitlyn Jenner (no matter how problematic the latter might be) have brought issues of transgender rights, visibility, and representation to the forefront in a way they just haven't been in the past. Hell, I'm pretty convinced that the majority of the American population only just learned the word "transgender" in 2015 after Jenner made her first public appearance via Vanity Fair . And at the end of the day, that matters.

Although we can probably still count the number of trans actors on television or trans models on the runway on two hands, fashion and media have at least started to make space for them. In conversations with non-binary or trans acquaintances, I know that many of them didn't have any celebrity role models to turn to when growing up. Teen queens like Lizzie McGuire and Raven just didn't cut it, because the experiences of those characters were so unlike their own. The knowledge that a transgender teenager could flip through a magazine and see Nef's face or put on Transparent and feel a little more validated is irrevocable progress not only in terms of politics, but in terms of body positivity. When we see bodies like our own being represented, we often feel a little more visible, acknowledged, and accepted, too.

2. More Visibility For Plus Size Women

The idea of seeing a plus size woman with visible fat on her body living unapologetically on the television, in glossy magazines, or even just on my social media timelines would've seemed outrageous to pre-teen me. But here we are, with influential bloggers like Gabi Gregg and Nicolette Mason collaborating with big brands, with Gabourey Sidibe starring in fearless sex scenes on primetime, and with Tess Holliday signed to a major agency.

I once interviewed plus size model Denise Bidot, and she told me that her daughter would be part of the first generation of women growing up and seeing diverse representations of the many ways there are to be a woman in her magazines and on her Netflix. Even though we're nowhere near totally fulfilled inclusivity, I hope that should I ever choose to have children, they'll see themselves represented in a meaningful way — so that they never have to question whether they're in the "right" or "wrong" body when it comes to aesthetic things such as weight.

3. More Awareness For The Many Layers Of Privilege

The more we've discussed feminism and body positivity, the more we've hopefully come to understand that although most women are subject to oppression based on their gender, there are layers within that oppression that can affect the way we perceive both our bodies and the bodies of others.

4. And With That, Deeper Conversations About Intersectionality

I'm the first to admit that I still have a lot to learn when it comes to ensuring my feminism is as intersectional as possible, but I'm thankful to see and hear these conversations happening around me, and I'm thankful for the people willing to teach me.

As a child, no one was there to educate me on the fact that, oftentimes, eating "healthily" is far more expensive than eating "unhealthily," and that this then creates a relationship between low income families and "obesity" that puts them at higher risk of marginalization for both their economic positions and body types. Hell, no one was there to teach me the word "feminism." That wouldn't happen until college.

There are so many ways to exist as a woman — no one way more valid than the other. Many women have no interest in traditional femininity, whereby they are allocated the color pink, clothes with lace and frills on them, or tons of pretty makeup.

Androgyny is just as legitimate a form of self-expression as any other, and we are finally seeing this concept infiltrate fashion and media. Target got rid of gender assignments in its children's section. Zara just released an ungendered clothing line. UK department store Selfridges dabbled into an agender pop-up shop, and models like Rain Dove are walking runways. In time, this will hopefully come to the general understanding that gender is complex and fluid, much like the ways we choose to physically present ourselves.

For many young girls, Barbie is an outlet. She can be anything she wants to be; any profession, any sexuality, and sporting any style. But until 2016, she came in one size only, and in limited skin tones. Today, the Fashionista Barbie line includes several new skin colors, different hair textures, and three new body shapes, including curvy, petite, and tall. Some incarnations of her rock natural hair, while others have fully embraced "unnatural" dye jobs. Even though this is only the beginning, and I yearn to see fat Barbie and trans Barbie someday, it's an incredible step for women and girls — many of whom have personal and unique relationships with this doll.

Curvy Barbie might not have my back boobs or 50-inch ass. But she looks a lot more like me than regular Barbie ever did. I cannot begin to conceptualize what that kind of relatability would have meant to 11-year-old me.

7. The Beginnings Of The Reclamation Of The Word "Fat"

I won't pretend that the word "fat" isn't still an insult in the minds of a lot of human beings. But steps towards the reclamation of the word as either a descriptor and nothing more or as a means towards empowerment are aplenty.

Being fat used to be the worst fate I could imagine, because that's precisely how I was taught to think about it. Today, it's a word that's still used to scare monger and push diet culture upon us. But it's also utilized by badass bloggers and celebrities who know that "fat" can be beautiful, sexy, desirable, and even healthy. It's used by women trying to help other women understand that the fat on their bodies isn't anything to feel less worthy over. It's certainly not anything that justifies poor treatment by others.

The idea that fat can be beautiful is a relatively new one — and one I certainly wish I'd come across in 1999 when I first started learning that my baby fat wasn't going anywhere.

Social media can be both a blessing and a curse. But despite the myriad of Internet trolls it has arguably spawned, social media has also created a way for women to interact with voices, experiences, and people they otherwise wouldn't have come across, and I think particularly Instagram.

I'm certain that the liberation of plus size fashion (in terms of heightened awareness over size discrimination in the industry and efforts made to combat it) wouldn't have begun happening in such a mainstream way had it not been for the many unapologetic babes taking to Instagram with their photos and #CelebrateMySize hashtags. I'm certain that teenage girls growing up chubby in middle America would have no way of easily clicking on a #PlusSize hashtag and being met with thousands of images of women with bodies similar to their own who aren't living in shame over those bodies. And I'm certain that differently-abled beauties like Jillian Mercado wouldn't have the glorious reach and ability to connect to others that they have now.

I had no idea what Photoshop was until well into my adult life. I mean, I knew what the software was. But I didn't know just how often and how intensely it's used to manipulate the way bodies look — and I'm willing to bet particularly women's bodies.

But as of late, we've been seeing campaigns for Truth In Advertising. We've witnessed brands like ModCloth and Aerie promise that they will no longer use Photoshop, all in the effort of presenting the public with more realistic interpretations of beauty, and images that are less likely to cloud general perceptions (and myths) regarding the existence of one perfect female body.

Chances are that most women have been told they "look like a slut" when sporting a cute (but short) skirt. Any woman who exercises sexual autonomy or control over her body is probably called a "slut" on a regular basis. Women aren't often encouraged to be open about their sexualities, show pleasure towards and love for their bodies, or express themselves in any way that could be deemed immodest or un-ladylike.

Thankfully, we've started to deconstruct the loaded S-word — sometimes reclaiming it, sometimes highlighting the sheer absurdity of assuming any one individual has the right to comment on the bodies or private lives of others. I'm still waiting for the day when high school girls don't get slut shamed for having sex while the boys they're having sex with are simultaneously praised and dubbed contemporary adolescent heroes. But the more we talk about the fact that many women enjoy sex, that the way a woman dresses has no correlation to how likely she is to have sex with someone, and that a woman's sexuality and body are hers alone, the more likely that scenario hopefully is to happen.

11. The No Makeup Selfie

Seeing celebrities sans makeup used to be a thing reserved for the tabloids alone — because god forbid celebs, and especially the female ones, ever be seen in a way that is natural, relatable, or perfectly normal. But as of late, more and more celebrities have embraced the #NoMakeup selfie, posting images of their #IWokeUpLikeThis faces all over social media.

These are images that not only humanize famous people, but that can serve as reminders to women that faces that aren't made-up can be just are stunning, just as worthy, and just as badass as ones decked out in foundation and lipstick. No one "has" to wear makeup, unless it's their preference and choice to do so.

So even though there's a lot of work to be done, and a lot of cultural norms and constructs left to shatter, I have to believe that body positivity for women is changing for the better. I have to believe that by the time I have a kid, and particularly if that kid is a girl, they will feel represented and visible — no matter their gender identity, sexuality, weight, skin color, or physical abilities.