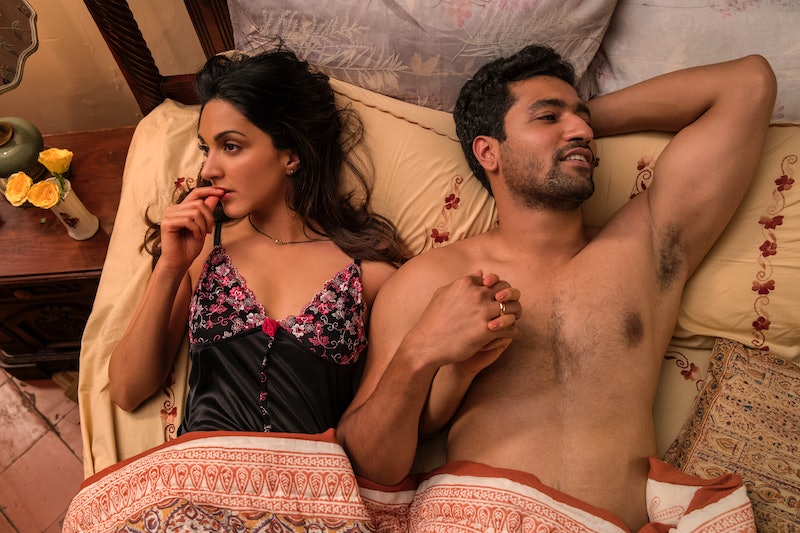 The next time you’re in the mood to unwind with something that’ll fog up your bedroom windows, this list features a diverse selection of documentaries, foreign films, comedies, and dramas to watch. From the slightly suggestive to the downright raunchy, these movies run the entire spectrum. Yes, God, Yes, which is as suggestive as it is pious, showcases a young woman at a Christian camp discovering her sexuality. There’s also the BDSM extravaganza that is 365 Days, an overtly sexual movie that’s been called Poland's 50 Shades of Grey. And then there’s The Blue Lagoon, which revolves around two underaged cousins on the cusp of sexual maturity (yes, that’s really the plot).

From period films to contemporary classics and everything in between, there are plenty of options if you’re looking for a movie that’s as dirty as it is entertaining. So turn down the lights, put the children (or pets) to sleep, and enjoy these 21 dirty movies on Netflix.

Newness tells the story of Martin and Gabi, two millennials who are looking for love (or at least their next hookup) on a dating app. From their first meeting, there’s chemistry — but their relationship isn’t without its bumps, and they soon find themselves in something of a slump. This leads the couple to embark on a unique arrangement in the hopes of keeping their relationship feeling “new.”

OK, so The Blue Lagoon is one of the most “how did this get made” movies on this list, but that’s exactly why it’s worth a watch. The film stars a young Brooke Shields alongside Christopher Atkins as two cousins who were shipwrecked on a remote island, where they’ve been stranded for years. Once their hormones started surging, they… well, you know.

Feeling nostalgic about your first love? Then Amar is the perfect movie to put on. This Spanish-language romance is about two people falling in love for the first time, and how that experience can be feel in turns blissful and crushing. All in all, Amar is a gorgeous movie that features some hotter-than-hot scenes, and will leave you feeling sentimental for young love.

If you want some period drama with your steamy romance, check out Elisa and Marcela. The film, which is set in 1901 and shot entirely in black-and-white, recounts the true story of Elisa Sanchez Loriga, who masqueraded as a man in order to be with the woman she loved, Marcela Gracia Ibeas. The real-life couple is credited as the first same-sex pair to marry in Spain.

This Spanish film from director Paco Caballero follows five loosely intertwined stories over the course of one (very) sexy evening. From couples looking to partner-swap to singles searching for some no-strings-attached fun, and everything in-between, More the Merrier argues that there’s absolutely nothing shameful about those promiscuous evenings you may (or may not) regret the next morning.

Berlin Syndrome is as thrilling as it is sexy. When a young Australian photographer named Clare (Teresa Palmer) meets a local named Andi (Max Riemelt), the two hit it off. Little does Clare know that she is about to be kidnapped by her disturbed date. If you’re looking for some fright with your frisk, Berlin Syndrome fits the mood.

Another scary and sexy film to check out is Cam, a Netflix Original starring Orange is the New Black’s Madeline Brewer. Alice (Brewer) is a cam girl obsessed with internet popularity, who soon discovers she's been booted out of her account by Lola... a woman who is, in turn, revealed to be a more successful version of herself. Trippy, right? You may want to keep the lights on for this one, just in case.

The steamy Spanish drama The Tree of Blood (El árbol de la sangre) follows a young couple, Rebeca and Marc, who are conducting research for a book about their families’ shared history — a history full of scandalous secrets that could tear them apart. Who knew familial drama could inspire such a sexy film? The Tree of Blood is full of twists, turns, and hotter-than-fire scenes.

Lust Stories is an Indian, Hindi-language anthology movie, comprising four short films. The stories range from a college professor who has a one-night stand with a student, to a pair engaging in a secret sexual relationship, to a woman having an extramarital affair. The film also sheds light on female exploitation in South Asia, which makes it a powerful watch.

365 Days tells the story of Laura (Anna-Maria Sieklucka), a Polish businesswoman who is unhappy in her relationship. Massimo (Michele Morrone), the leader of an Italian crime family, becomes obsessed with her at first sight, eventually kidnapping her and keeping her imprisoned in his villa. What follows is a steamy cat-and-mouse game of seduction and lust — which is just fine, if you're willing to look past the whole kidnapping plot.

Madame Claude is a biopic that tells the true story of Fernande Grudet, aka Madame Claude, a French woman who owned and ran a successful brothel in ’60s-era Paris. But her influence extended beyond the world of sex work, and she ended up exploiting people in power gain. Altogether, it’s a wild, sexy, surprisingly empowering tale of lust and intrigue. Karole Rocher stars as the enigmatic titular character.

Cameron Diaz stars alongside Christina Applegate and Selma Blair in what is probably her raunchiest movie ever. The Sweetest Thing is about three single girlfriends living in San Francisco and navigating their respective (very busy) love lives. There’s this one scene where Blair’s character, Jane, ends up in the hospital because her mouth ends up on … well, just watch it and see.

You know what they say: after the party comes the hotel lobby, right? In this case, The After Party is about a rapper and his best friend-slash-manager who have one night to make their dreams of hip-hop stardom come true — while embarking on some explicit escapades along the way. The film stars a few rappers who also act, including Kyle Harvey and Teyana Taylor, and features cameos from Wiz Khalifa, DJ Khaled, and more.

So Not Another Teen Movie isn’t as visually graphic as some of the other films on this list, but all the sexual innuendo and suggestive dialogue more than makes up for it. The film parodies a slew of ’90s teen comedies, including She’s All That, 10 Things I Hate About You, and Cruel Intentions, in the most vulgar ways possible.

Another steamy Argentinian comedy to check out is Dry Martina. The film follows Martina, a retired star who’s since fallen into obscurity — though she becomes particularly fixated on her past, passionate love affairs. In an attempt to relive her glory days (in the bedroom, not on the stage), she travels to Chile in a bid to rekindle a long-extinguished flame.

Stranger Things’ Natalia Dyer stars as Alice in Yes, God, Yes, a coming-of-age comedy about a Catholic teen trying to figure out her own budding sexuality while dealing with internalized religious shame. It’s sort of like Molly Shannon’s SNL character Mary Katherine Gallagher, but with a lot more nuns. The film also stars Veep’s Timothy Simons and Wolfgang Novogratz.

If you’re a fan of vulgar road trip comedies and double entendre, Sex Drive is for you. The film revolves around a recent high school graduate who drives with his friends from Illinois to Tennessee to meet a person he’s been chatting with online. Of course, irreverent shenanigans ensue along the way. Sex Drive stars Josh Zuckerman, Amanda Crew, and Seth Green.

This article was originally published on Feb. 15, 2016