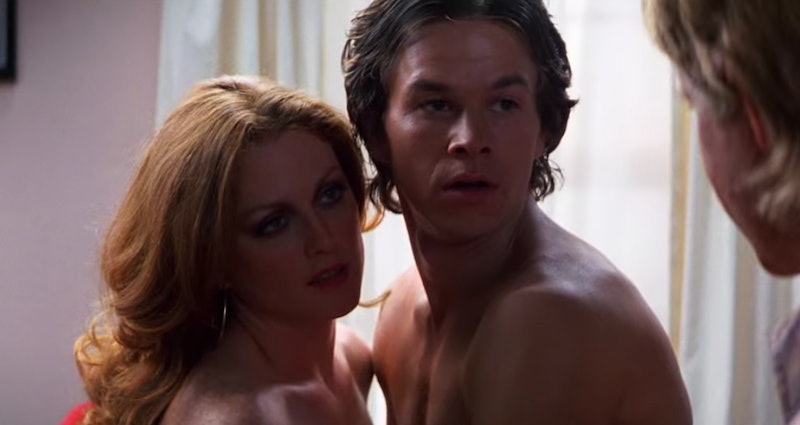 It’s good to keep your mind open and your perspectives varied, so no matter your taste in movies, it’s worth giving at least one or two (or seven) of these films a chance. As long as you’re prepared to sit through some pretty graphic sex scenes, these practically-porn movies are a great time, whether you’re watching them alone or with a partner. Just make sure to take a cold shower afterward, because fair warning: these movies will definitely heat things up.

There may be highly realistic sex scenes in Dogtooth, but that doesn’t mean this film is necessarily sexy. It’s actually very disturbing. This Yorgos Lanthimos (The Favourite) flick is about a father who keeps his three adult children estranged from the outside world, forcing them into a cult-like atmosphere filled with arbitrary and ridiculous rules. At one point, the father forces two of them to have sex with each other. Dogtooth is filled with scenes you’ll never forget, for better or worse.

This Steve McQueen-directed movie is about a sex addict named Brandon Sullivan (Michael Fassbender) who is trying to hide his private life from his sister, Sissy (Carey Mulligan). When Sissy decides to move in with Brandon indefinitely, his addictive escapades encounter a roadblock. It’s a little dark, so it might not be for everyone. But if you’re a Fassbender or McQueen fan, this is definitely a must-see flick. Heads-up, though — his sister has a history of cutting and suicide, which could be triggering for some viewers.

Rent or buy now on Amazon Prime or rent it on Apple TV.

Sharon Stone takes femme fatale to the next level when she plays a crime novelist accused of murdering a famous rock star. Stone’s Catherine Tramell has written a book that mimics the real-life murder a little too closely for comfort. She and Nick Curran, the detective investigating her crime (Michael Douglas), have a sexy, twisted relationship — so messed up that he’s OK with ignoring her probable guilt in the murder. If you haven’t seen this ’90s neo-noir classic, now might be the time.

This 2001 coming-of-age film features Tyrese Gibson as Joseph “Jody” Summers, a 20-something jobless man who still lives with his mom despite fathering two children by two different women. Rather than taking charge of his life, Jody spends his time sleeping around, cheating on his girlfriend, Yvette — played by Taraji P. Henson in her film debut — and getting into trouble with her ex-boyfriend Rodney (Snoop Dogg). From many sex scenes to a stacked soundtrack of music from Snoop Sogg, Tyrese, D’Angelo, this NAACP Image Award-nominated film has it all.

The movie is extremely silly. But even if the premise is a little unrealistic (women have no-strings-attached sex with Dane Cook’s character and then find their “true love” shortly after), the intense sex montage in this movie is more graphic than many teenage fans were prepared to see when it came out. You’re not alone if you still blush thinking about it.

Watch it on Xfinity.

E.L. James changed the entire book industry when her self-published novel Fifty Shades of Grey became a viral sensation, making appearances at suburban book clubs all over the country. It was only a matter of time before someone turned the books into movies, and they do not disappoint. Dakota Johnson stars as Anastasia “Ana” Steele, a literature student assigned to interview mysterious millionaire Christian Grey (Jamie Dornan). As the two grow closer, he slowly introduces her to the sexual world of BDSM. These three books and movies are definitely not Shakespeare — some of the dialogue will make you cringe — but they’re addictive and sexy.

In this incredibly graphic two-part movie from controversial director Lars von Trier, Joe (Charlotte Gainsbourg) tells Seligman (Stellan Skarsgård) all about her various sex-capades with flashback details. The story begins with her teenage trysts and leads to her life as a 50-year-old, self-diagnosed nymphomaniac. Seligman tries to analyze the whole thing, but it’s not really something you can break down if you’re not a licensed therapist (which he definitely isn’t). The double-feature also stars Shia LaBeouf, Christian Slater, Jamie Bell, Uma Thurman, Willem Dafoe, and Connie Nielsen.

Rent or buy Volume I or Volume II on Amazon Prime.

Nicholas Hoult and Laia Costa star in this sexy romance about a couple who decide to explore hookup apps and open relationship culture. The sexual encounters get more intense as they try to one-up one another in their sexual conquests. The whole movie is set to a dreamlike ambiance thanks to Like Crazy filmmaker Drake Doremus.

Blue Is the Warmest Color (La Vie d’Adèle) is an incredibly raw and graphic film that tells the story of two young French women who begin a passionate relationship. It won the Palme D’or at the 2013 Cannes Film Festival, and stars Léa Seydoux and Adèle Exarchopoulos were also awarded for their vulnerable and exposed portrayal of the young lovers (not to mention the extensive and explicit sex scenes). The movie earned an NC-17 rating stateside, so you know where you’re headed here.

Watch now on AMC+ or rent or buy now on Amazon Prime.

Watch it on HBO Max.

Watch now on Cinemax or rent or buy on Amazon Prime.

Named the most explicit Hollywood film of all time for sexual content in a study published by NY Daily News, Martin Scorcese’s The Wolf of Wall Street features a record-breaking amount of curse words as well as many extreme sex scenes. Set in the early 1990s, the film stars Leonardo DiCaprio as Jordan Belfort, who quickly works his way up Wall Street’s corporate ladder. Alongside trusted lieutenant Donnie Azoff (Jonah Hill), Belfort defrauds rich investors and makes millions while engaging in a seemingly endless amount of drugs, sex, and other dangerous thrills.

Watch now on Pluto TV or rent or buy on on Amazon Prime.

Set in the mid-1980s, this biographical drama tells the story of Dallas electrician Ron Woodroof (Matthew McConaughey), who’s shocked to learn he has AIDS — and supposedly only 30 days to live. Determined to live through the disease, Ron begins illegally obtaining not-yet-approved treatment drugs and discreetly selling them to those in need through his “Dallas Buyers Club.” Also starring Jared Leto and Jennifer Garner, the Oscar-winning film’s heavy subject matter is accompanied by many uncomfortably graphic sex scenes.

Watch it on Peacock.

If you’ve seen Girls or House of Gucci, you know Adam Driver is no stranger to a sex scene. For one of multiple in 2021’s Annette, he upped the ante by literally singing while simulating oral sex on Marion Cotillard, which spawned many viral headlines. The film follows comedian Henry (Driver) as he falls in love with opera singer Ann (Cotillard) and the pair have a baby, Annette (Devyn McDowell), whose arrival drastically alters their lives.

This article was originally published on Sep. 18, 2016