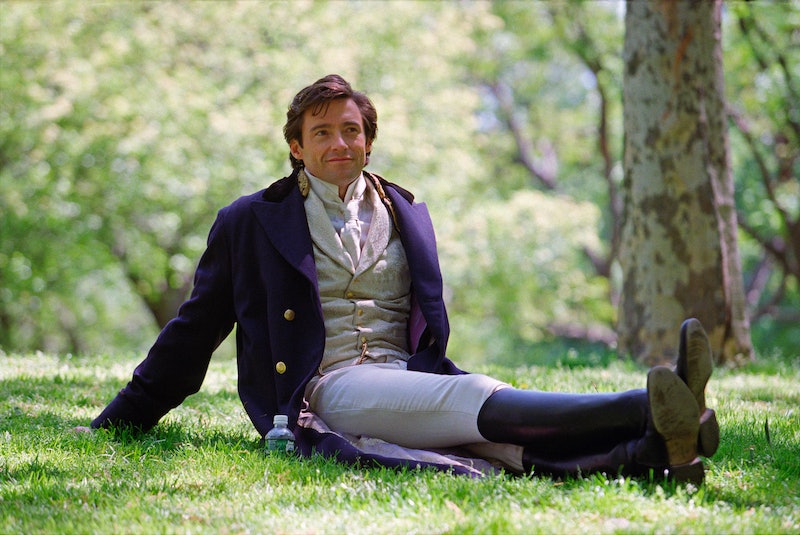 Even if you’re an avid fan of the genre, there’s a good chance Kate & Leopold slipped under your rom-com radar. (If you were so lucky, you might’ve found it on a quest to watch Hugh Jackman’s entire filmography, as we all must do at some point.) The 2001 film follows Meg Ryan and Jackman as the titular couple, a 21st-century ad executive and the 19th-century nobleman who travels through time and woos her with old-fashioned affection.

As Kate & Leopold turns 20 this December, its status as a hidden gem of the genre makes some sense. It came out on Christmas, but it’s not a holiday movie; it’s Meg Ryan, but it’s not Nora Ephron. But this in-between-ness makes the film all the more intriguing. Like Kate, your world probably doesn’t look like the vibrant, autumnal oases seen in When Harry Met Sally... or You’ve Got Mail. It might be less cozy, less charming — isolating enough that you’ve considered shifting just to see if those TikTok teens were onto something. (Of course, loving the movie’s message isn’t license to go full born-in-the-wrong-decade. Leopold’s era sucked in its own ways, too.)

If you haven’t rewatched Kate & Leopold recently, there are some fascinating details that might stick out after a fresh viewing. From clues that point to the big twist to concerning time travel implications that rival the ick of Marty McFly and his mom in Back to the Future, it’s time for a Kate & Leopold deep dive.

It Has One Of The Most Brutal Lines, Ever

This movie wastes no time establishing just how unhappy Kate is with her life and her ex, Stuart. In fact, within the first 15 minutes, one of the harshest comebacks in cinematic history tells us everything we need to know. (It also happens to be a line from the 1952 I Love Lucy episode featured in Being the Ricardos.) When Kate laments that she blew her best years on him, he responds, “Those were your best?” Ouch.

In Kate’s defense, if she really was so unpleasant the whole time, perhaps it was nature’s attempt to prevent her from unwittingly hooking up with her great-great-grandson on the regular. Yeah, the time travel is high-key horrifying, but more on that later.

The Twist Was Teased From The Beginning

More astute viewers might have caught this right away, but the film’s romantic twist (that is, Kate hopping through time to live with Leopold in the past) is foreshadowed from the start. “Who is that? I feel as if I’ve seen her,” Leopold says when he first meets Kate. Ultimately, he had seen her — at his uncle’s party in 1876. It just hadn’t happened on Kate’s timeline yet.

The Plot Is Familiar

A mysterious storybook stranger arrives in modern-day New York and challenges the beliefs of an unlucky-in-love professional? Swap Amy Adams for Hugh Jackman, and you’ve got Enchanted.

So Is The Supporting Cast

Ryan was a bona fide rom-com queen by the time she starred in Kate & Leopold. For his part, Jackman was already clawing his way toward superhero fame after debuting as Wolverine in 2000’s X-Men. But the film also features a supporting cast of very familiar faces before they went on to land their career-defining roles, including Viola Davis as the police offer who schools Leopold on modern laws.

Back in 1876, you can even catch Bob’s Burgers star Kristen Schaal as a guest at Leopold’s dance — her very first film role.

From the toilet to the disposable razor, Leopold is fascinated by everything in Stuart’s modern bathroom, but you have to wonder what he thought about the tube of Colgate toothpaste he found. William Colgate was the kind of industrialist Leopold would have grown up learning about. Per the Colgate website, the entrepreneur started selling jarred toothpaste in 1873, three years before Leopold peaced-out of the century.

Twenty years before the advent of Berries and Cream TikTok, Leopold served this delicious dish to Kate — specifically, strawberries and mascarpone on nine-grain toast. It’s also hilarious that one of the dreamiest things Jackman does in this already very swoon-worthy role is make breakfast. But here we are!

What Is It About Butter Commercials?

To borrow a phrase from Phineas and Ferb, if I had a nickel for every time a butter commercial was used as a major rom-com plot point (hi, Crazy Ex-Girlfriend), I’d have two nickels. Which isn’t a lot, but it’s weird that it happened twice, right?

The Princess Diana Reference Is Spot-On

It makes sense that Kate’s views on love might have been soured by Prince Charles and Princess Diana’s dream-turned-nightmare of a romance — after all, Kate & Leopold came out just four years after Diana’s death. But when Kate calls the royal saga “a cautionary tale” and proof that “you can’t live a fairytale,” the reference feels timely as ever. As Dana Schwartz put it for Bustle last year, we’re in the midst of a Dianaissance. From The Crown to Spencer, the late royal’s tragic story continues to captivate audiences decades later.

The Movie Introduced Hugh Jackman To A Major Collaborator

James Mangold, who directed Jackman in both The Wolverine and Logan, also directed Kate & Leopold. The range!

Leopold Makes An Excellent Point About The Sunday Scaries

It’s no secret that the dread you feel on Sunday nights can sometimes creep into the afternoon. Or the morning. Or, in Kate’s case, the second the clock strikes midnight. As she tells Leopold, who has little concept of a 9-to-5, “Sunday is the day before the day I work, so it gets poisoned.”

Later on, Leopold suggests Kate just, you know, quit her job. “Is this what you do at work, Kate? Research methods to deceive people? Refine lies until they resemble truth? It’s no wonder you dread your workweek,” he tells her. Kate promptly says it’s not so easy. Of course, if you’re as unhappy as Kate, here’s hoping you can find a new job/partner/situation instead of resorting to sketchy time travel. Speaking of which...

The Time Travel Logic Is So Confusing (And Terrifying)

The movie’s time crimes start out fairly innocuous. Like, if Leopold leaving his timeline prevents him from ever inventing the elevator, why do all elevators disappear but everyone still knows what they are?

But that’s quaint compared to the central problem of the movie. Apparently, Stuart is Leopold’s great-great-grandson — at least, going by reviews of the film from when it first came out (thank you, Roger Ebert). Though early descriptions of Kate & Leopold’s plot feature this detail, later versions of the movie appear to have scrubbed references to Stuart’s great-great-grandpa from the film altogether. Stuart does, however, mention the importance of returning Leopold to 1876 for the sake of his descendants.

Unless Leopold had children with someone else before meeting Kate and just hasn’t mentioned them (OK, fair), then it’s pretty much implied Kate will be his wife and, thus, mother of his future generations. Including Stuart. Kate’s ex. The guy she — ew.

More like this
The 'Scream 6' Trailer Shows Off Hayden Panettiere's Return & Ghostface In NYC
By Jack Irvin and Jake Viswanath
'That '90s Show' Star Callie Haverda Got Advice From Mila Kunis & Ashton Kutcher
By Brad Witter
A New 'And Just Like That' Table Read Pic Confirms A Key Character's Return
By Jack Irvin and Grace Wehniainen
12 Years Ago, Austin Butler Manifested His Oscar Nom In This Disney Movie Scene
By Jake Viswanath
Get Even More From Bustle — Sign Up For The Newsletter