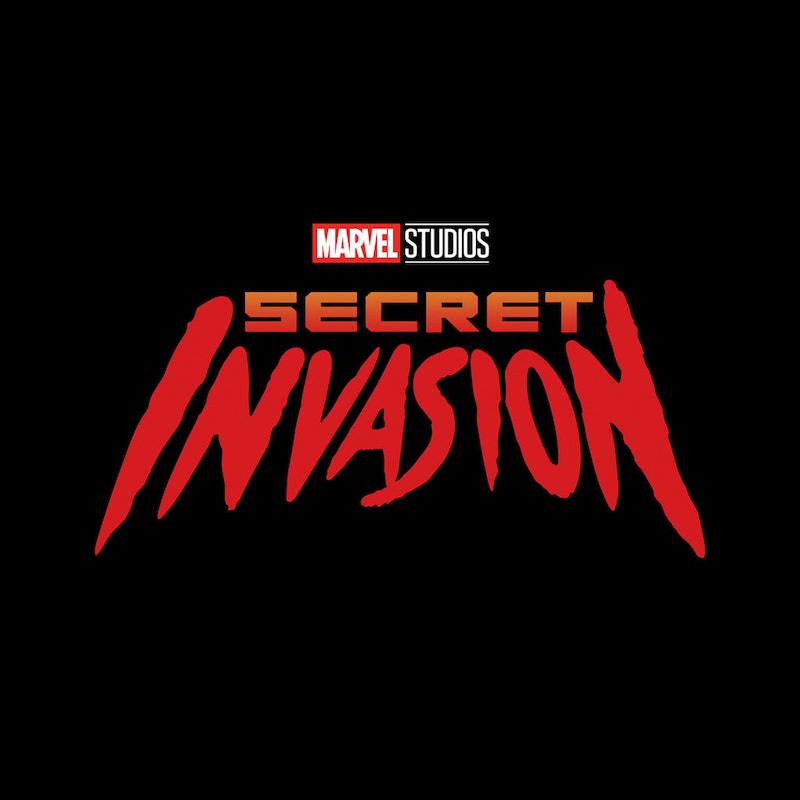 As if the Marvel Cinematic Universe hasn’t gone through enough chaos recently — looking at you, Wanda, Loki, and Sylvie — another upcoming Disney+ series could add to the mayhem in a major way. Even though there are several projects premiering between now and Secret Invasion, this highly anticipated series stands to be one of the biggest game-changers for the MCU. Not only does it boast a star-studded cast, including Avengers founding father Nick Fury (Samuel L. Jackson), but it also focuses on the shapeshifting Skrulls, whose knack for deceit will lead viewers to question everything and everyone they’ve come to know thus far.

Described by Marvel as a “crossover comic event series,” Secret Invasion will focus on “a faction of shapeshifting Skrulls who have been infiltrating Earth for years.” Wait, years? The implication that any of the heroes or villains we’ve met in the MCU could be Skrulls in disguise is terrifying yet exciting. As everyone who’s seen Spider-Man: Far From Home knows by now, the aliens’ skills are advanced enough to fool even the most discerning viewers. Because potential nods to the series have already appeared throughout the first batch of Disney+ MCU shows (and more, surely, will follow), now is a good time to brush up on the series and the Skrulls behind it. Here is everything to know about Secret Invasion so far, from the cast to the comics backstory and potential release date.

In addition to Jackson reprising his role as Nick Fury, Ben Mendelsohn will be back as Talos, the Skrull who starred in Captain Marvel and subbed in for Fury during the events of Far From Home. Game of Thrones alum Emilia Clarke will also star in the series, and she’s already pretty nervous about spoiling something. On The Tonight Show Starring Jimmy Fallon’s July 21 episode, she joked, “The first people I spoke to from Marvel were their security team.” Deadline reported that Kingsley Ben-Adir, Olivia Colman, and Christopher McDonald would join the upcoming project, too.

Other existing Marvel characters have not been confirmed to join Secret Invasion just yet. However, given the crossover nature of the show and its significance in the comics, it seems like the perfect place to feature beloved heroes and villains from across the MCU.

Secret Invasion In The Marvel Comics

As CBR reported in December, Marvel Studios President Kevin Feige compared the upcoming project to another impactful conflict in the Marvel Comics. “Next to Civil War,” he said, “Secret Invasion is arguably the biggest crossover comic event of the last 20 years.” We all know how that Captain America entry affected the MCU. For starters, the Avengers’ schism left the team extremely vulnerable in the fight against Thanos. So if Secret Invasion even comes close to its level of drama and action, well, there could be a serious shake-up on the way.

In the comics, the Skrulls shapeshifted as many notable figures during their attempt to take over Earth, including Ant-Man’s Hank Pym. Several of the other characters revealed to be Skrulls haven’t been introduced in the MCU yet, so perhaps their on-screen counterparts could be figures more familiar to viewers. Either way, there are already a few good guesses to consider, starting with several of the Disney+ shows.

Marvel hasn’t shared Secret Invasion’s plot, but Feige did tease what to expect in a conversation with Collider. “I mean, we're interested in the political paranoia aspect of Secret Invasion ... and, of course, it will tie into other things and the Skrulls in ways you haven't seen before,” he told the site in January, “but yes, anything could be anything.”

Naturally, that “anything could be anything” potential is what makes theorizing about Secret Invasion so fun — and there’s already an abundance of hints to pore over. There’s the Skrull who visited Monica Rambeau during that WandaVision post-credits scene, having been “sent by an old friend” of her mom’s — likely Nick Fury, up in Skrull space. A Skrull appeared very briefly in Loki, too, and can be seen upon the God of Mischief’s arrival at the Time Variance Authority. (Certainly, a shapeshifting Skrull bent on invasion would be a threat to the Sacred Timeline.) The moon Loki and Sylvie visit, Lamentis-1, also has ties to Skrull enemies, the Kree, as Inverse reports.

Though we don’t actually hear about the Skrulls or Kree in The Falcon and the Winter Soldier, one key character from the series has been long theorized to be a potential shapeshifter: Sharon Carter. As evidenced by that finale post-credits scene, the pardoned agent plans to peddle government secrets and prototype weapons to some ostensibly bad buyers. What better post than a well-connected, undercover Power Broker to carry out the Skrulls’ schemes?

Though Marvel has not announced a release date for Secret Invasion, several outlets point to the series likely premiering in 2022. With Captain Marvel follow-up The Marvels premiering that November, the release of Secret Invasion could help set up some of the events in that sequel. Plus, in a recent interview with The Movie Dweeb, McDonald revealed that he would be heading to London to film this summer, suggesting a production timeline that would also fit with a release date next year.

A trailer, then, likely won’t be released anytime soon. That said, Marvel did offer fans a crumb on Disney Plus Day on Nov. 12 by sharing a glimpse at Nick Fury in the series. Behold:

Given the Skrulls’ presence in Far From Home, it follows that their evolving story could continue in Spider-Man: No Way Home this December, so perhaps you won’t need to wait too long to see what the aliens have been up to.

This post will be updated with the trailer, release date, and additional plot details as more information on Secret Invasion becomes available.

More like this
An MCU Superhero Makes A Surprise Appearance In The New ‘She-Hulk’ Trailer
By Grace Wehniainen
'Bridgerton’s Jonathan Bailey & Simone Ashley Just Teased A First Look Of “Kanthony” In Season 3
By Grace Wehniainen, Alyssa Lapid and Sam Ramsden
George R.R. Martin Teased That ‘House Of The Dragon’ Is Inspired By The Anarchy
By Grace Wehniainen and Kadin Burnett
The New ‘LOTR’ Prequel Series Trailer Teases The “Many Lies Of Middle-Earth”
By Alyssa Lapid and Jack Irvin
Get Even More From Bustle — Sign Up For The Newsletter