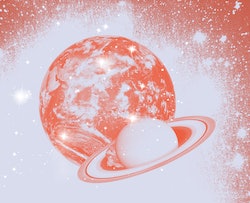 It may still be hot out, but we’re slowly and surely approaching the end of summer. The cosmic events taking place this month are set to bring liberating changes and exciting energy shifts to all zodiac signs. You’ll want to mark your calendar for all the major astrological events in August 2022, because there’s a lot going down.

We’re still in the heart of Leo season as we enter August, which always brings us an exciting cosmic confidence boost and gets us in touch with our star power. These red-hot fire sign vibes will be amplified once love planet Venus enters the Leo mix, too. Once the sun enters Virgo on August 22, the vibe shifts, and we’ll be more likely to act from a place of groundedness and logic. We’ll also be able to set some productive intentions a week later, during the end-of-month new moon.

August is also set to be an especially chain-breaking month, thanks to the influence of innovative planet Uranus. Things kick off with this wildcard planet in a special alignment with both high-energy Mars and the North Node of destiny, which inspires us to take action toward our fate. An eccentric full moon in the Uranus-ruled sign of Aquarius mid-month activates our desire for personal freedom and rebelliousness. And toward the end of the month, we’ll usher in Uranus retrograde 2022. Additionally, Uranus will be forming strong aspects with every personal planet in the game this month — including the sun, Mercury, and Venus — so we’ll be feeling its freak-flag-flying flair from every angle.

Here’s the astrological overview for August 2022.

The month kicks off under a rare triple alignment between hot-headed Mars, unpredictable Uranus, and the fate-bending North Node, all of which are colliding in the earthy sign of Taurus. The conjunction between Uranus and the North Node perfects on July 31, but Mars’ officially makes its connection to the two celestial markers on August 1. With this cosmic concoction brewing, look out for flashes of insight, sudden shifts in your visions or goals, and motivation to take decisive action toward your unique destiny. On a personal level, this could prompt us to make some unexpected and liberating moves. On a collective level, this could bring about some fateful twists, especially when it comes to the themes we’ve been dealing with since Uranus has been in Taurus — including global finance shifts, supply chain issues, climate crises, and more.

On August 4, communication planet Mercury enters down-to-earth Virgo — one of its home-base signs. Mercury in Virgo helps us to get mentally organized and think more practically. Paired with Leo season’s confidence boost, it’s a great time to embrace clear and direct self-expression. It also gives us the summer’s first taste of Virgo energy, which we’ll have much more of later this month, once Virgo season begins.

Skipping ahead to the last week of August, Mercury will switch signs once again, this time entering the balanced and diplomatic realm of Libra. This transit helps to highlight our social graces and brings harmony to our mental affairs. However, Mercury’s moves this month also kick off the pre-retrograde shadow period of the next Mercury retrograde, which will begin in Libra on Sept. 9 and then backspin into Virgo. That said, take note of the conversations, logistical issues, agreements, and social dynamics that take place during the last third of this month — as we’ll be revisiting these themes through the upcoming retrograde cycle.

The first few weeks of the month make up the bulk of Leo season, which turns the volume up on our charisma, creativity, and confidence levels and makes hot girl summer a way of life. It’s a time to prioritize authentic self-expression and stand tall in our power, unafraid to take up space and work unabashedly toward our goals. On August 11, the summer heatwave gets even steamier, as romantic planet Venus joins the sun in Leo, amplifying the red-hot and vivacious vibes of the solar season. With Venus in this fire sign, expect to feel flashier about your romantic feelings and beauty preferences alike — public displays of affection, glamorous and glitzy outfits, and a bolder flirtation style are all on the table.

An Eccentric Full Moon In Aquarius

August delivers the final supermoon of the year — the full moon in forward-thinking Aquarius peaks on August 11. This airy lunation offers a refreshing break from Leo season’s heat, helping us to step back and see our emotions and passions more objectively. The Aquarius energy of this full moon inspires us to embrace our uniqueness and be true to our feelings, so don’t be afraid to rebel against the status quo and make moves toward a more authentic future.

A Major Energy Shift For Mars

On August 20, passionate planet Mars is entering the social and quick-thinking sign of Gemini. With Mars in Gemini, expect to take a more action-oriented approach in communication and lean more toward multitasking than single-focus projects. Mental stimulation is super important now, as we’ll have an insatiable sense of curiosity and a thirst for new information.

This transit is a big deal, as Mars will be in Gemini for a very extended stay — it’s traveling in this air sign’s territory through the rest of 2022 and into 2023. The reason for this much-prolonged visit is due to its impending retrograde period, which begins on October 30. Mars only retrogrades once every two years, so once Mars enters Gemini, pay attention to the way your motivation, energy levels, and decisiveness about things shift. We’ll be working with these themes for months to come.

On August 22, the sun leaves its home sign of Leo and enters the mutable earth territory of Virgo, kicking off Virgo season 2022. Virgo season energy helps us to get organized, tidy up our vibes, and generally clean up our acts as we move through the final month of summer. It’s a great time to be more productive and focus on self-improvement — and because Virgo is the sign that rules health, it’s a fabulous time to check in on your wellness goals, too.

Wildchild planet Uranus is shaking things up come August 24, which is the kick-off to Uranus retrograde 2022. While Uranus is known for its disruptive and rule-breaking energy, this annual backspin isn’t as chaotic as some. Instead, it’s a time to subtly process the paradigm shifts and sudden changes that have taken place in your life over the past year — and get in touch with which of those inspirational sparks you’d like to see through and explore more thoroughly.

As of Uranus’ retrograde station, we can officially say we’re in the thick of retrograde season, as all five transpersonal outer planets will be backspinning. This means there’s lots of micro and macro processing going on behind the scenes of our personal lives and society at large.

A Cleansing New Moon In Virgo

The last new moon of the summer hits at the end of the month, so get ready to set your final intentions for the season! The sun and moon are aligning in earthy Virgo territory on August 27, amplifying the thorough and refined energy of the sign. This is an auspicious time to set productive goals, build some healthy new habits into your routine, and focus on getting organized as you round out the summer.