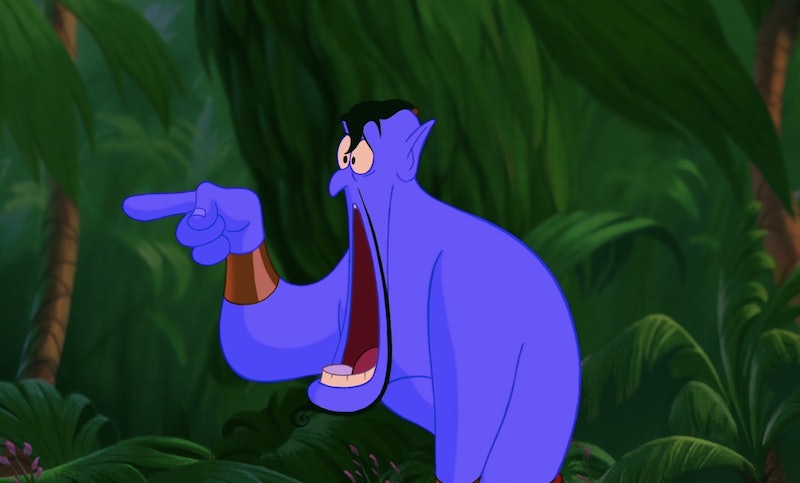 And the award for the most slyly perverted decade goes to...the ’90s! Even in children’s movies, writers were somehow able to slip in a slew of NSFW jokes that sound dirty out of (or even in) context. These 15 unexpected quotes from ’90s films are undeniably sexual, even if you never really noticed them until now.

There are two things that will pretty much always be popular: '90s movies and out-of-context NSFW quotes. For those who actually grew up in the '90s, no movies will ever compare to those from this magical decade. Disney was churning out hits with Aladdin, The Lion King, and The Little Mermaid, and the adult films like Forrest Gump, Jurassic Park, and Titanic grew to be some of the biggest blockbusters of all time. But what many don’t know is that these films feature lines that, when taken out of context, will definitely make you blush.

When you're watching these movies on an average weeknight, you're unlikely to notice anything dirty about these lines. But when plucked from their natural habitat, they suddenly appear to have a very perverted meaning... leaving you wondering how they got past the cutting room. So take a look at these 15 unexpectedly sexual quotes from quintessential '90s movies.

The Lion King is one of the more heart-wrenching Disney flicks out there, but that doesn’t mean it doesn’t have its fair share of dirty quotes. Early in the film, there is a scene where Mufasa is teaching Simba how to hunt. He imparts some useful tips to his son on how to make the most of pursuing his prey, yet the words themselves sound sexually charged.

2. “Barely even friends, then somebody bends, unexpectedly.” — Mrs. Potts, Beauty and the Beast

Beauty and the Beast is already a children’s movie with some very adult themes. From Stockholm Syndrome to beastiality — not to mention all the filthy lines that sneak their way into the dialogue — perhaps Beauty and the Beast should come with an MPAA disclaimer. We feel that quotes such as, “Barely even friends, then somebody bends, unexpectedly” support our case.

3. “Darling, it’s better down where it’s wetter. Take it from me!” — Sebastian, The Little Mermaid

When it comes to deceptively dirty quotes, Disney is the reigning champion. The Little Mermaid, for example, is filled with them. During “Under the Sea,” Sebastian makes his case to Ariel about how much better the ocean is compared to earth. Following this line about how it’s “better down where it’s wetter,” it’s almost impossible not to mutter “that’s what she said” under your breath with a giggle.

Kids’ movies aren’t the only ones that feature deceptively dirty lines. Even family favorites like Forrest Gump have some eyebrow-raising quotes that are puzzling, like this one when Forrest (Tom Hanks) describes what it’s like to be shot in the behind. According to him, the silver-lining to getting a bullet in the butt is unlimited ice cream. Maybe there’s a bright side to everything.

5. “I was just imagining a rope around that beautiful neck.” — Frollo, The Hunchback of Notre Dame

Sure, Jurassic Park may not be a kids movie, but it certainly isn’t adult enough to warrant quotes like this one. “Hold onto your butts!” is allegedly a figurative expression, but we still can’t help but take it out of context. Regardless, this iconic film starring Laura Dern, Jeff Goldblum, and Sam Neill in their physical prime is enough to make us dab the sweat from our foreheads, dirty quotes or not.

Mulan is a great film with an important message, but that message doesn’t include suggestive quotes like this one. When Mushu explains that he’s a dragon — and not a lizard like Mulan mistakenly assumes — he states that unlike his reptile friends, he doesn’t “do the tongue thing.” Whatever that’s supposed to mean, we’re guessing Mushu gets left-swiped a lot.

8. “I’ve never felt so good before. This empty place inside of me is filling up. I simply cannot get enough.” — Jack Skellington, The Nightmare Before Christmas

Jack is talking about the Christmas spirit! That's what he can't get enough of, sickos! But it’s not your fault for thinking Jack is sexually submissive. Quotes like this in The Nightmare Before Christmas, when taken out of context, make it seem like Jack Skellington enjoys getting filled up with… whatever it is our filthy minds think he’s talking about.

9. “I’m the only one getting dumped on.” — Kevin McAllister, Home Alone

Home Alone’s Kevin (Macaulay Culkin) was put through some serious sh*t. That’s why quotes like this sound assumingly scatalogical. Everyone in the McAllister household seems to gang up on poor Kevin, and when his mother (Catherine O’Hara) points out that he’s the only one in their 15-person household to make trouble, he replies: “I’m the only one getting dumped on.” Little Kevin was into some seriously dirty stuff, apparently.

Aladdin is another Disney film that’s crawling with unassuming dirty quotes. The Genie (voiced hilariously by the great Robin Williams) is the main culprit. When Aladdin somehow sneaks his way into an extra wish, the Genie says this line about “no more freebies,” also emphasizing that he’s a “ba-a-a-a-d boy.” The fact that the Genie has temporarily morphed into a sheep may explain the exaggeration, but our filthy minds think otherwise.

11. "I thought the Earth wasn’t supposed to move until the honeymoon." — Genie, Aladdin

To be honest, a lot of what Genie says in this movie can be taken the wrong way. This one especially about “feeling the earth move” on one’s honeymoon, which slyly insinuates... well, you know. This joke also plays homage to Carole King’s iconic song “I Feel The Earth Move.” Who knew Disney execs were such big Carole King fans.

This joke is pee-related, so Lloyd (Jim Carrey) in Dumb and Dumber is already halfway there. But mentioning “stinging” while emptying his bladder also makes us wonder if he’s talking about sexually-transmitted infections. Given the fact that it's Carrey, in one of his most outrageous comedies, it’s not totally outlandish to assume there’s another meaning to this already dirty scene.

Okay, so this Lorne Michaels-produced film probably intended for this to sound absolutely filthy, but it still makes our eyes widen. Tommy (Chris Farley) is obviously just pretending that a dinner roll was his pet that represented a sale in this scene. But it sounds completely different when taken out of context. But just for clarity, nothing weird is going on. Allegedly.

Disney isn’t the only one churning out suggestive content — they’re also roping in Pixar for the dirty double-entendres, as is the case with A Bug’s Life. In a scene from the 1998 insect film, the Fly Brothers literally swarm in to wreak havoc on the protagonists. When one of them discreetly mentions wanting to “pollinate” with another bug, our adult minds just know that he’s not talking about fertilizing the plant life.

Pixar is at it again with the soiled euphemisms. When Woody tries his hardest to reunite with Andy after being toy-napped in Toy Story 2, Jessie has a snarky (yet sort of sad) reply that also sounds weirdly orgasmic. This is all before going into Jessie’s backstory, which will most likely bring tears to your eyes. But this exchange between the two beforehand is slightly NSFW.

More like this
These Brooke Davis Quotes From 'One Tree Hill' Will Never Get Old
By Sabienna Bowman and Jack Irvin
The Banned 'Friends' Ad Shows Monica As You’ve Never Seen Her Before
By Sam Ramsden
Twitter Is Having A Field Day Over Mr Blobby’s Costume Selling For £62k
By Catharina Cheung
'Friends' Star Maggie Wheeler Offers Support To Matthew Perry After Reading His Memoir
By Alyssa Lapid
Get Even More From Bustle — Sign Up For The Newsletter
From hair trends to relationship advice, our daily newsletter has everything you need to sound like a person who’s on TikTok, even if you aren’t.

This article was originally published on Feb. 24, 2016