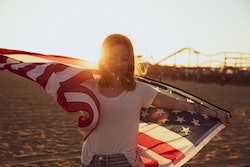 According to the stars, the changes in 2020 brought on by Age of Aquarius are just the beginning of a string of over-due transformations as far as the United States is concerned. The country is due for a radical transformation thanks to once-in-a-lifetime event: Pluto return in the U.S. On Feb. 22, 2022, the dwarf planet will make a return to no-funny-business Capricorn at the exact angle it was during the “birth” of the United States in 1776, bringing focus to power struggles and the country’s most delicious secrets. If you live in the United States, you’re going to want to know exactly how the United States’ Pluto return 2022 will affect your zodiac sign.

“A Pluto return happens when Pluto passes all 12 signs and goes exactly to the same sign it was in when something was born or created,” Lauren Ash, an astrologer and writer, tells Bustle. “Because it takes 248 years for Pluto to go around the sun, only countries, empires, dynasties, companies, and things of that nature can go through Pluto returns.”

In astrology, the dwarf planet represents power dynamics, hidden truths, and the psyche — your hidden agendas and the shadow self. When Pluto makes its return back into Capricorn, it’s like the country has entered an entirely new era or cycle, meaning it needs to revisit and reconcile parts of its shadow side.

Technically, America has already been undergoing its Pluto return. There’s debate on the exact date, but many agree that Pluto entered Capricorn around November 26, 2008. If you count the return from the moment Pluto is at 27 degrees Capricorn (the exact degree it was in during the country’s inception) most astrologers agree that the United States’ Pluto return lands around Feb. 22, 2022. Pluto leaves 27 degrees Capricorn on March 10, then enters Aquarius on March 23, 2023. It will retrograde back into Capricorn twice before it completes its return on November 19, 2024.

Since Pluto’s homecoming will be back in Capricorn, you can expect this transit to be all about authority and money. “Capricorn is the cardinal earth sign and thrives within existing power structures and systems. The energy of Pluto paired with Capricorn is all about flipping the script on those in power,” says Ash. Although these changes will be happening in the structures and systems within the country, this transit can still seep through to your personal life, as conversations of climate justice, workers’ rights, and other socio-economic issues hit a fever pitch.

If you’re wondering how this monumental event will impact you directly, continue reading to see how the United States’ Pluto return 2022 will affect your zodiac sign.

Aries, America’s Pluto return is making waves in your public life, so you may be in for some revelations when it comes to where your heart is at work. It’s a good idea to reflect on whether your work is serving you. “Pluto is in your tenth house, causing major shake-ups to your career and public image at this time. All that glitters isn’t gold and many Aries placements may feel called to leave behind their cushy jobs or prestigious positions of power to pursue new career paths. This is the time to use your passion and boldness to blaze a new trail in life,” says Ash.

The Pluto return is shaking up your traditions and belief systems, Taurus. Look forward to moving outside of your comfort zone and instead, dipping your toes into different cultures and challenging your old beliefs.

“Pluto is your ninth house, Taurus, so there will be an increased interest in exploring new religious or spiritual paths for you. Tauruses will feel a huge shift in their existing belief systems and feel compelled to seek out new answers in life. This may mean ruffling some feathers as you pursue your authentic self,” says Ash.

Scrap everything, Gemini — you’re in the market for all-new everything. This transit is showing you tough love in the art of letting go, so expect shocking truths, hidden agendas, and revelations to arrive as you learn to release all that’s been plaguing you lately.

“Pluto is in your eighth house, Gemini. Radical change is headed your way! The current circumstances of your life are about to be challenged, forcing you to confront the meaning of the path you’ve chosen. There may be financial struggles or a need to lean on others as major personal changes rock your world. Don’t fret — Pluto only clears away what isn’t working to make room for something new,” says Ash.

Time for a vibe check when it comes to your partnerships, Cancer, because this transit is revealing hidden truths among your closest circle. Reflect on the state of your relationships and get real about the transformations that need to happen inside them.

“Pluto transiting your seventh house is a period that will bring profound changes within your relationships — especially those that have made you feel less than or weak. This work is inner-shadow work. Now is the time to take back control of your power and fight for the love and understanding you deserve,” explains Ash.

Time to give back to the collective, Leo, because the stars have officially elected you as its advocate during the United States’ Pluto return.

“When Pluto transits your sixth house, Pluto asks you to work selflessly to serve the greater good. You will spend this Pluto return pouring your skills into the collective, tightening your daily routines, and enduring personal failures. This is a major time for assisting others and giving rather than personal development — just be careful not to lose yourself in unnecessary self-sacrifice,” says Ash.

Feeling overwhelmed, Virgo? You can expect this transit to stir up some frustration in the pleasure department, so if you’ve been feeling low energy, use this transit to pour more excitement and play into your life.

“When Pluto transits your fifth house, it brings major power struggles with your emotions and creativity. You’re feeling compelled to create and give back to the world, but feel burdened by your current responsibilities. There may be misunderstandings in relationships or with close family members, and issues of power and control from your past can surface,” explains Ash.

Libra, you’ve got some decisions to make and harmony to keep. Prepare to work on how to optimize your home life so you can find the equilibrium you so badly crave.

“When Pluto transits your fourth house, it’ll finally be time to balance out your life once and for all. You’ve been trying to have your cake and eat it too — but there will be a longing for a more mindful and purposeful life during these transits. You may feel compelled to break free of domineering paternal figures who have helped orchestrate your life up until this point,” says Ash.

It’s time to get real about it, Scorpio, but this time, your way of speaking your mind may be called in the hot seat. It’s time to think about how you translate your emotions and concerns.

“When Pluto transits your third house, be ready to have uncomfortable conversations. Your mind will be racing with possibilities during these transits — this period of time will bring major psychological change, self-reflection and transformation that will transform the way you see the world and communicate your view of it,” Ash explains.

What have you been hoarding from your expeditions, Sagittarius? This transit is making moves in your material world.

“When Pluto transits your second house, it’s time to release any material possessions or personal values holding you back in your old life. Pluto in your second house will have you questioning what you valued and appreciated about yourself and then letting go of what no longer serves you. You’re dealing with a stage of material collapse ahead of rebuilding your future,” says Ash.

Time to shake things up in your tried and true solutions and traditions, Capricorn. This transit is asking you to center yourself and reflect.

“When transiting Pluto crosses your ascendant house, it’s time to fearlessly be yourself. You will become more strong-willed, confident, and authoritative. You will feel challenged to make changes to your core identity as the collective moves toward new ideals. Stay flexible — but don’t compromise the better parts of your personality in the process. Learn to let go of the little things along the way,” explains Ash.

Talk about ego demise, Aquarius. Pluto’s return is impacting you on a supernatural level, so you’ll be spending this time getting to the crux of your subconscious.

“With Pluto occupying your twelfth house, expect major changes to your psychological inner world. These Pluto transits will dig up the deeply buried parts of your psyche and force you to confront them head-on. This is a time to confront your self-destructive behaviors and let go of the things that are holding you back from your full potential,” Ash says.

Prepare for major transformations in your inner circle, Pisces. The feeling to serve your community will be heightened during this time, so take it as the green light to lend the world some of your unique empathy.

“When Pluto transits through your eleventh house, there will be changes to friendships and your connection with the collective. You may find opportunities to share your ideals with powerful and influential people during this time. This can provide an incredible opportunity to share your perspective with the world — just be sure any opportunity you take aligns with your soul's purpose. Temptation and opportunities that aren’t what they appear on the surface may be presented to you during this time,” says Ash.

More like this
Here’s Your Horoscope For Unconventional Aquarius Season
By Brittany Beringer
Your January New Moon Horoscope
By Nina Kahn
Here’s Your Daily Horoscope For January 27, 2023
By Mecca Woods
These 4 Zodiac Signs Make The Best Bridesmaids
By Nina Kahn
Get Even More From Bustle — Sign Up For The Newsletter
From hair trends to relationship advice, our daily newsletter has everything you need to sound like a person who’s on TikTok, even if you aren’t.