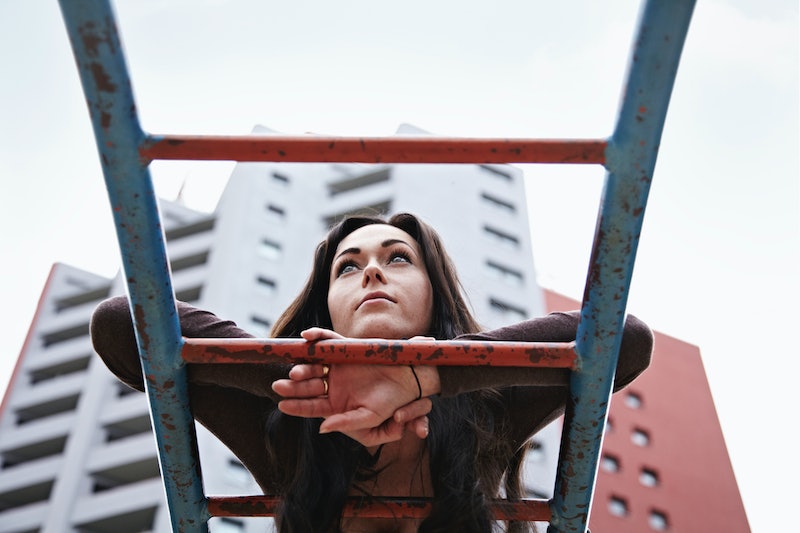 There's absolutely nothing wrong with doing your own thing, living an independent life, or waving a giant "loner" flag as you eat lunch all by yourself. It's confident and cool AF. But it's possible that, at one point or another, you have worried that you don't fit in, and understanding why those emotions might be coming up can help you tackle the issue and feel more at ease in a group.

Plus, after spending more than a year in isolation, it’s no surprise if you feel more awkward socializing than you did pre-pandemic. And the transition back to in-person life can be bumpy as your friendships and social skills adjust to the shift — hence nerves or the feeling that you don’t fit in anywhere.

Whether you’re a self-described loner or a lifelong extrovert, everyone feels weird in social situations from time to time. There’s actually a scientific reason for that — humans have a fundamental need to belong that is rooted deep in evolutionary survival instincts, says Kim Chronister, Psy.D., a licensed clinical psychologist. Evolution aside, rusty social skills from lockdown or a bad case of FOMO from seeing your friends Instagram their social outings can also add to feeling outcast.

But even though it’s normal to feel lonely sometimes, that doesn’t make it hurt any less. To help you get to the bottom of your social discomfort, experts share 15 reasons you might be thinking, “I don’t fit in anywhere,” and what to do to overcome those thoughts.

1. Your Friends Are Changing

Remember when you were really young and assumed that your middle school BFF would be in your life forever? If that’s the case, congrats on the long-lasting friendship. But know that it’s also very common for people to drift apart as time passes, according to licensed marriage and family therapist Heidi McBain, LMFT. She says it can happen for all sorts of reasons: Maybe you moved to another city and have trouble staying in touch, or perhaps you’ve grown as a person and are no longer as compatible with certain friends.

Regardless, these shifts are normal, McBain explains. So if you feel on the outside of your usual friend group, it might be a sign that your dynamics are naturally changing and you’re in the market for new pals whose lives better match your own.

2. You Haven’t Found “Your People”

If you feel like a stranger at work or live on the periphery of your friend group, it could be that you haven’t found the right community for you, says McBain. She says that may be the case because you don’t yet know yourself well or haven’t settled on what you value most in friendships.

The solution? McBain recommends reflecting on what you prioritize in relationships, whether that’s by yourself or with the help of a therapist. Once you have a clear idea of who you are and what you want, she says the friendships will come in time.

3. This Isn’t The Social Environment For You

Sometimes being in the wrong setting is to blame for your struggles, says licensed counselor Nawal Alomari, LCPC. For example, if you prefer to have one-on-one conversations with lots of eye contact and few interruptions, a massive party might not be your ideal forum for social connection. If the atmosphere doesn’t suit your social preferences, it doesn’t mean there’s anything wrong with you — Alomari says it just might signal that you’re better suited to a different environment.

4. You Aren’t Opening Up

Feeling part of a group isn’t just about meeting people you like. It also requires people to open up to each other, and if that isn’t happening then it can be hard to connect, according to McBain.

Sometimes this is easier said than done if you tend to be more shy or private. But you don’t have to change who you are or pretend to be something you’re not to forge those connections — it’s just about being a little more open a little more often. McBain’s tip? “If you tend to be quiet but still want to engage with others, try asking them questions about themselves and their life, and then actively listen to their responses,” she says.

5. You Worry Too Much About What Everyone Thinks

If ever there was a way to come across as uncomfortable or nervous in public, it’s by caring too much about what other people think, according to McBain. While this habit might be difficult to break, consider how it might cause you to put up a wall, or project standoffish vibes.

To help you focus more on the present moment and less on what others may or may not be thinking, Alomari recommends literally visualizing yourself leaving the brains of the people around you and going back into your own body, where you can instead focus on how you’re feeling. McBain also suggests asking questions and active listening to help you ease into feeling more comfortable interacting.

If you’re constantly thinking, “I don’t fit in,” while in a group, then you’re directing much of your attention inwards, says Alomari. And it’s hard to successfully socialize when you’re channeling all that energy towards yourself.

One way to get out of your head is by, well, literally getting those thoughts out of your mind and into the open. “If you feel like there’s somebody you can confide in about feeling nervous, you might get the comfort that you need or learn that they’re feeling the same,” she tells Bustle. “We assume that everyone else is doing well and that socializing is natural for them, when in reality, they probably feel a lot of the same feelings that we do.”

7. You’re In A Self-Conscious Cycle

Discomfort in social situations can spiral into a cycle of feeling like an outsider, says Alomari. “If you feel like you’re strange or not like everybody else, then you’ll be more closed off. And when you’re more closed off, it limits people from getting close to you,” she tells Bustle. “It’s a self-fulfilling prophecy.”

To help break the circle, she says to remind yourself that everybody feels weird sometimes and it doesn’t define you. In fact, your uniqueness is what makes you shine and can help you build those bridges.

8. You Haven’t Owned Your Uniqueness

On that note, dulling your uniqueness in order to fit in might actually have quite the opposite effect, says McBain. Pretending to be someone you’re not will only leave you with shallow friendships and a sense that no one understands you, she explains. The more you embrace who you are and the things you like, the more likely you’ll attract folks who feel the exact same way. Consider this permission to confidently be yourself.

It’s OK to be shy. After all, not everyone is a life-of-the-party type. But feeling shy to the point where you’re unable to chat with new people can make it hard to insert yourself into a group dynamic. Luckily, McBain has some advice.

“Being shy might make it hard to meet people in big groups, so maybe try to stick to smaller group settings when you can,” she says. “That being said, if there are certain people you feel more shy around than others, this might help you better understand the people who are ‘your people’ versus the ones who aren’t.”

10. You Ignore What You Want

Not prioritizing your wellbeing in a social situation can also cause you to feel alone in a group, says relationship expert and author Margaret Paul, Ph.D. “When we don’t connect with ourselves, we can’t truly connect with others. We may end up feeling not only empty inside, but also left out and isolated from others,” she tells Bustle. “People tend to treat us the way we treat ourselves, so when we ignore our feelings and wants or judge ourselves, we might experience being ignored or judged by others.”

This pattern can be tough to overcome, but understanding that you can set an example for how you want to be treated is step one. Paul suggests working on these concerns with a therapist to help you reconnect with yourself and, ultimately, connect with others too.

Connection is a two-way street, Paul says. You talk a bit, your friend talks a bit, and the dynamic stays relatively balanced. So if you feel disconnected from those around you even though you’re confident in a social setting, she says that could be a sign that you need to listen more.

The next time your friend tells a story, try to really hear them. Instead of offering a story of your own, trying to one-up them, or launching into a monologue, Paul says simply listening can go a long way. Once this becomes a habit, she says they’ll also be more likely to return the favor, thus creating a deeper bond.

There’s nothing wrong with putting effort into your relationships. But pay attention to where and why you’re putting in that effort, says Paul. If you’re “trying too hard” in a caring way but you still can't connect, she says it may be better to move on and find a group that will truly appreciate you. But it’s also possible to try too hard in an effort to seek approval, she adds. That can be off-putting to the people around you, and if you notice that happening, Paul says it might be best to take a step back and reflect on why you feel the need to please.

It’s also possible to not try hard enough, says McBain. This might be the case if you’re always waiting around for people to come to you. If you’re at work, for example, and wondering why no one is talking to you, take it upon yourself to move things along. Be chatty, be nice, ask people about their day.

And consider getting outside your comfort zone by attending events, joining clubs, and saying yes to invitations even if you’d rather stay home. You don’t have to commit an entire evening to a party, McBain says, but it never hurts to attend events or even create a few of your own.

14. You Aren’t Expressing Yourself

While it doesn’t really matter what you wear, there is something to be said for expressing yourself outwardly as a way of connecting with like-minded people. While clothes, jewelry, and haircuts won’t make friendships, they are conversation starters and can let people know what you’re all about.

15. You Have Social Anxiety

If you constantly struggle with that tension of feeling left out, you may actually have social anxiety, says Alomari. If you suspect you’re dealing with more than the usual jitters, she recommends going to therapy to get help and find ways to cope with your anxiety.

It's never fun to feel left out, or as if you don't fit in. But there are plenty of things you can do about it, should you be interested in creating new relationships. It takes time, and may require a few tweaks to how you think or move through the world. And yet it can result in more positive interactions, and maybe even new friendships.

More like this
5 Signs You Have A Toxic Relationship With Yourself
By Lexi Inks
Why We Love Investigating Friendship Breakups
By Carolyn Steber
Why Being “Too Sensitive” In Relationships Is A Good Thing
By Lexi Inks
18 Hinge Prompt Answers To Try If You’re Looking For Something Casual
By Lexi Inks
Get Even More From Bustle — Sign Up For The Newsletter
From hair trends to relationship advice, our daily newsletter has everything you need to sound like a person who’s on TikTok, even if you aren’t.