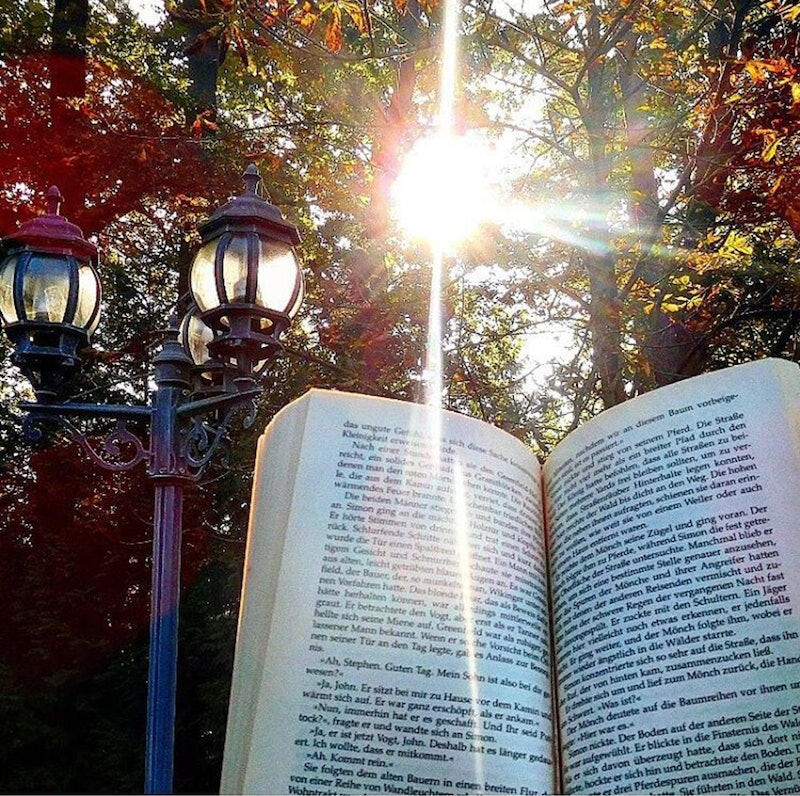 2016 has been a wonderful year for book-lovers. We've been spoiled with Harry Potter news, from the premiere of the Cursed Child play to the release of a whole new Fantastic Beasts franchise, and we've been treated to movie and TV adaptations of some of our all-time favorite books. We've watched our fave authors get political on Twitter. The lack of diversity in the publishing world is still very much a problem — but the conversation around it has really picked up momentum this year, leading to the launch of some amazing book clubs and readathons designed to get readers passionate about reading #OwnVoices. We've seen cute bookish proposals. We've bought fun bookish merch. All in all, it's been a dream.

And let's face it, in most other ways, 2016 has not been our favorite year. That just speaks to the power of books: even in the midst of such a tumultuous, disappointing, and (frankly) terrifying year, books have managed to put smiles on our faces all the way from January to December. So if you're in the need for some festive cheer this holiday season, let's take a look back over the 23 most incredible bookish moments that have warmed our hearts in 2016.

Much like her fictional alter-ego Belle, Emma Watson loves to read — and this year, she launched a feminist book club (which Sophia Bush joined!) to shine a spotlight on important feminist works such as Maya Angelou's Mom & Me & Mom and Marjane Satrapi's Persepolis.

2. A Tween Started The #1000BlackGirlBooks Drive

11-year-old Marley Dias got fed up of reading about nothing but "white boys and dogs" in her English classes, so she started a book drive to collect books where Black girls are the main characters. Her original aim was to collect 1,000 of these books and donate them to an underprivileged school in Jamaica — but since then, her campaign has skyrocketed. Beloved YA author Jacqueline Woodson told the New York Times that Marley is her "dream 21st-century person, in terms of realizing something needs to be changed and making it happen."

Author Angela Thomas was nervous that publishers wouldn't be interested in the subject matter of her #BlackLivesMatter-inspired book The Hate U Give — but the novel ended up in the middle of a massive bidding war between 13 publishing houses. Amandla Stenberg has even been cast in the movie!

Judy Blume and Tumblr practically raised us — and this year, the two finally became one. The woman who taught us everything we know about sex, bras, and periods took to the social network to chat about her latest book news, and to engage with her devoted fans.

5. A BookTuber Anthology Was Announced

The BookTube community is every booklover's favorite corner of the Internet, so when 13 of the most famous BookTubers teamed up with 13 of the biggest names in YA, it was almost too exciting for our hearts to handle. Because You Love To Hate Me is an anthology of dark stories by authors such as Renée Ahdieh, Victoria Schwab and Adam Silvera — but there's a twist: each author was challenged by one of the BookTubers to write from the perspective of a specific villain. I just got shivers.

6. The #WhitewashedOUT Hashtag Struck Back

It's been frustrating and disappointing seeing beloved Asian literary characters be repeatedly erased from the Hollywood adaptations — but the #whitewashedOUT hashtag brought a brief moment of joy. The Twitter movement was organized by We Need Diverse Books, Nerds of Color, and Margaret Cho — and brought a lot of attention to this important issue. Unfortunately, it's a cause that still needs fighting...

7. Readathon 2016 Raised Money For A Great Cause

As if we needed any more excuses to spend the day reading, Penguin Random House organized #Readathon2016: a day officially devoted to reading as much as you possibly can. Random House encouraged readers to share shelfies to social media, organize reading parties, or even head to a local library for some communal reading. The event was designed to raise money to help libraries across the U.S. support early childhood literacy.

8. Being Jazz Was Totally Inspiring

One of the most inspiring books of 2016 has to be Being Jazz , the memoir written by trans teenager Jazz Jennings. Jazz is the star of TLC reality series I Am Jazz, and uses her fame to work hard on behalf of the trans community. Her memoir was uplifting, honest, sometimes very sad — but ultimately full of hope. And isn't that what 2016 has left us needing most of all?

9. Neil Gaiman Surprised Us All With Book News

Back in June, fantasy author Neil Gaiman dropped a huge bombshell: he's been writing a secret book since 2011. Gaiman's new book will be a retelling of Norse mythology, and will be available at the beginning of 2017. Not a bad surprise, eh?!

Back in 2012, bookseller Jonathan O'Brien was left in charge of the Twitter account for Waterstones, the major London bookstore where he worked. Apparently his Pokemon chat caught the attention of Victoria Carlin, who tweeted, "Well I'm in love with whoever is manning the Waterstones account. Be still my actual beating heart." Jonathan replied, and it turns out Victoria's intuition was correct: in 2016, these two booklovers tied the knot. No, be still my actual beating heart.

11. Amandla Stenberg Was Cast In Everything Everything

This amazing actress is everywhere right now, and I for one am loving it. We were already over-the-moon excited about the upcoming adaptation of Nicola Yoon's popular YA novel Everything Everything — and Amandla Stenberg being cast in the lead role was really the cherry on the cake.

We Need Diverse Books have done incredible work campaigning to increase diversity in children's and YA literature, and now they've got two anthologies of their own on the way. The first We Need Diverse Books anthology Flying Lessons , which comes out in January, will be a collection of middle-grade fiction from authors such as Jacqueline Woodson and Kwame Alexander. The YA anthology, Lift Off, will follow shortly behind — and will feature stories from Melissa de la Cruz and Nicola Yoon.

SKIP TO #16 IF YOU STILL HAVEN'T READ CURSED CHILD!

Have you gone yet? OK, good. Because I need to talk about one of the best bookish moments of 2016: the moment we learned Hermione Granger would grow up to become the Minister of Magic. We always knew that girl would go far...

14. Elizabeth Gilbert Taught Us All About Love

In Eat, Pray, Love, Elizabeth Gilbert taught us about self-discovery — and this year, she taught us another valuable lesson: how important it is to follow your heart. Gilbert revealed in an emotional Facebook post that she is in love with her terminally ill best friend Rayya Elias — and despite the tragic circumstances of their relationship, the love these two have expressed for each other is awe-inspiring.

15. The New Librarian Of Congress Made History

In September, Carla Hayden was officially sworn in as the new librarian of Congress — and the moment was one for the history books. Since the position was established in 1800, it has been filled exclusively by white men, some of whom had no official librarian training. Carla Hayden, who has over 20 years of experience, is wonderfully qualified for the job — and she's smashed through a glass ceiling or two on her way.

We know our Hogwarts houses inside out; we know what wands our wizarding counter-parts would wield; but for a long time, our Patronuses were a total mystery to us. This year, at last, Pottermore introduced the Patronus test — and even better, we learned what J.K. Rowling's Patronus is: a heron.

17. The Good Sex In Fiction Award Was Introduced

18. #TrumpBookReport Made Us Laugh Through The Hard Times

It might feel rather counter-intuitive to include Donald Trump in a round-up of the year's best moments — but the #TrumpBookReport hashtag managed to make us laugh even as the situation this year was taking a turn for the worse. These tweets imagined the kind of under-prepared book reports that Donald Trump might deliver on classic books — and I imagine they're pretty close to the truth, tbh.

19. DiverseAThon Got Us All Reading More Widely

In response to a hateful YouTube video about diversity in publishing, a group of BookTubers set up the DiverseAThon: a week-long challenge for participants to read more diverse books and own voices. DiverseAThon got started in 2016, but it has plans to continue into the new year. Yay!

If you were wondering why Chad Michael Murray failed to appear in the Gilmore Girls reboot, I may have the answer: he was busy writing a romance novel. In what might be the strangest (and greatest) book news I've heard all year, it turns out he is writing a book called American Drifter based on — yup — a dream that Chad Michael Murray had one night.

Readers have been anticipating Zadie Smith's latest novel Swing Time for what feels like forever — and as soon as it arrived, it was followed up with even more exciting news: a Swing Time TV show is in the works.

November was a great month for Gilmore Girls fans. Not only did we get four whole new episodes of the show — and find out those famous last four words — we also got a whole memoir from Lauren Graham. Talking As Fast As I Can was jam-packed with behind-the-scenes info about filming the Gilmore Girls reboot, as well as Graham's thoughts on the original series.

23. J.K. Rowling And Lin-Manuel Miranda Did THIS:

To round up what's been a pretty wonderful year for bookworms, two of our pop culture heroes had a Twitter love-in that made all of our hearts collectively melt. It started when Lin-Manuel Miranda was tweeting his favorite pop culture events, and included a line from the Harry Potter series. J.K. Rowling was pretty psyched to have made the list — and the two went on to praise each other and talk all things *Harry Potter*. Beat that if you can, 2017.