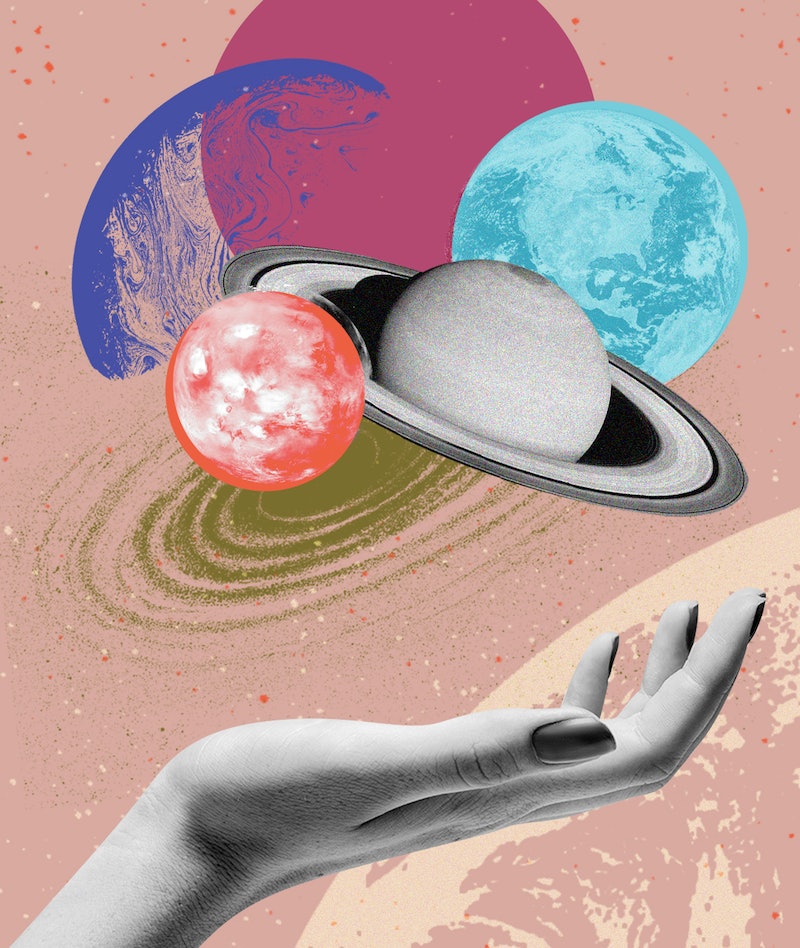 Let’s all take a deep breath and collectively brace ourselves for the realization that we are officially entering the final third of 2022. Between the last sparkles of summer and the first flickers of fall, September is a month full of major vibe shifts — and yes, it includes another Mercury retrograde period, too. You’re going to want to buckle your cosmic seatbelt and give yourself a heads-up on the major astrological events of September 2022.

We kick off the month in the midst of Virgo season 2022, and this practical-minded energy sets the perfect stage for an end-of-summer clean-up job. Whether that means clearing out your closet to make room for autumn jackets or purging your followers list of any toxic frenemies, this zodiacal influence can inspire a clear-minded cleanse. Expect a vibe shift once the sun enters Libra, heralding in both Libra season and the autumn equinox. Like the sun, our resident romance planet Venus will also be transiting through Virgo for most of the month, then dipping into Libra during the final days of September.

We also enter the month with a whole lot of retrograde energy, which will only get more intense as the days go on. Jupiter, Saturn, Uranus, Neptune, and Pluto are already backspinning, and communication planet Mercury will join the party on Sept. 9. We’re also slowly but surely inching toward the powerful Mars retrograde that will dominate the last couple months of this year. While that backspin doesn’t begin until Oct. 30, Mars will officially enter its pre-retrograde shadow period on Sep. 3 — meaning that some of the themes we’ll be dealing with during the retrograde may start to emerge, and foreshadowing is taking place.

Summer is officially coming to an end, but all kinds of exciting cosmic shifts are just beginning. Read on for your September 2022 astrology overview and get ready for PSL season.

The first few weeks of September make up the majority of Virgo season 2022, which has us focused on organization, overall wellness, and drilling down into the details of our routines. As we wrap up the summer, Virgo season’s energy can inspire us to tidy up our homes, clean up our calendars, or cleanse ourselves of relationships that are no longer serving us. Use this solar vibe as an excuse to sweep the dust out of every corner of your life so you can enter the autumn in tip-top shape.

And it’s not just the sun lighting up Virgo’s slice of the zodiac this month. On Sept. 5, the love and value-oriented planet Venus will join the sun in Virgo, adding a bit of elegance and refinement to the current cosmic cocktail. With Venus in Virgo for a few weeks, we’ll be feeling a little more discerning about our romantic conquests — which could look like upping our standards in a current relationship or simply being choosier about who’s getting swiped right on.

Mercury retrograde is making a much-maligned comeback on Sept. 9, so brace yourself for three and a half weeks of retrograde antics. Mercury rules logistical matters such as communication, technology, timing, and so much more — so its retrograde periods can be especially obnoxious, as they can cause delays and ask us to slow down to review things in all of these areas.

The retrograde kicks off in socially-forward Libra, which gives us an early taste of Libra season energy, albeit a wonky one. This is a time to review matters pertaining to partnerships — whether that means addressing old issues in romantic relationships or renegotiating contracts in business. Keep in mind that two weeks later, on Sept. 23, Mercury will retrace its steps back into Virgo, which could cause annoying snags in our schedules or menial mix-ups when it comes to details.

A Mystical Harvest Moon On Sept. 10

September’s full moon is taking place on Saturday, Sept. 10 in the ethereal and emotional sign of Pisces. It also happens to be this year’s Harvest Moon, aka the full moon that occurs in closest proximity to the autumn equinox. This is the final full moon of the summer, so it’s a beautiful time to bring all of the season’s fantasies to fruition and “harvest” the magic of your manifestations. Adding to the mystical energy is the full moon’s conjunction with numinous planet Neptune, which casts a dreamy haze over this lunation. A positive connection to unpredictable planet Uranus could sprinkle some sudden climaxes or revelations into our lunar experiences too, so expect the unexpected.

Get ready to bring some balance to your life — or to try, anyway — because the sun leaves pragmatic earth sign Virgo and ingresses into harmony-loving air sign Libra’s territory on Sept. 22. This marks the beginning of Libra season, which is generally a beautiful time to be social, focus on your one-on-one partnerships, and try to find a happy medium in any area that feels out-of-whack. Libra zodiac energy loves peace, justice, and fairness, so embrace your inner diplomat and do your best to smooth over any inevitable Mercury retrograde dramas.

This solar ingress also overlaps with the date of the fall equinox — which is the first official day of autumn. Time to kiss hot girl summer goodbye and embrace cozy girl fall. During the equinox, the hour of daylight and nightfall are perfectly equal, which aligns beautifully with Libra season’s balanced vibes. As we head into the colder months of the year, this is a reminder to find your equilibrium, and it’s a great time to do a grounding equinox ritual to connect with the seasonal shift.

Additionally, during the final hour of the equinox, a special alignment will take place between backspinning Mercury and the sun known as Mercury cazimi. The word cazimi means “in the heart of the sun,” so it refers to when a planet is in a conjunction aspect with our solar star. This Mercury cazimi marks a key moment in the current Mercury retrograde cycle, and the fact that it occurs on the brink of a new astrological and meteorological season makes it extra intense.

Libra season may have just begun, but the planets are plunging us right in — as the September 2022 new moon in Libra brings the sun and moon together in this cordial air sign’s realm. While Libra’s diplomatic energy pushes us toward peacefulness, this lunation will challenge us to find a comfortable medium. Figuring out how much is too much may take more effort than usual, as some tough aspects with confusing Neptune and expansive Jupiter could cloud our judgment or make feelings seem larger-than-life.

A few days later, on Sept. 29, love planet Venus enters Libra. Libra is one of the zodiac signs ruled by Venus, so this marks a gorgeous homecoming for the planet of romance. This transit amplifies our sense of diplomacy and artistic aesthetics and emphasizes a focus on our partnerships. While Mercury retrograde may be mixing things up in relationships, this energy can help us to bring some much-needed harmony to our love lives and heighten our charm factor, too.