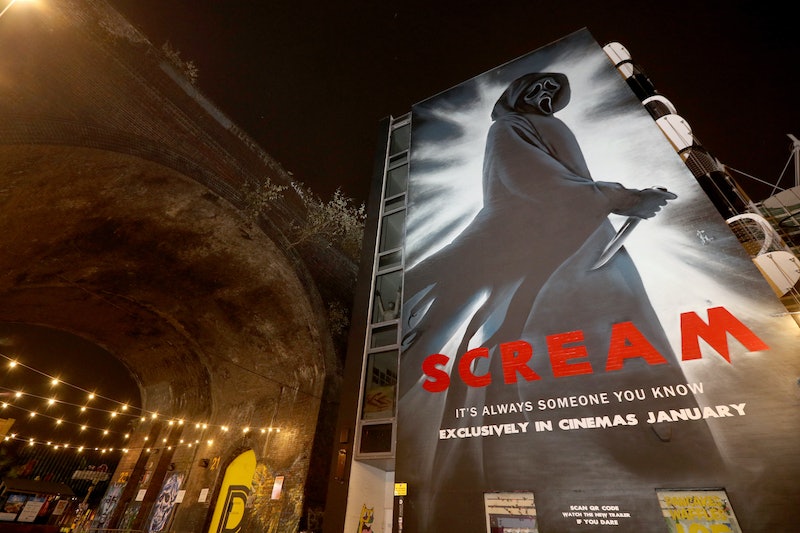 When Scream premiered in theaters in 1996, it was impossible to predict how massive the soon-to-be-franchise would go on to become. Scream, which was a mix of traditional slasher and satire focusing on what other horror movies have gotten wrong, was a hit with fans and critics alike. It revitalized the genre, and now has spun off four sequels and a TV show, with the latest film installment being 2022’s Scream. In 25 years, the franchise has raked in more than half a billion dollars in ticket sales, and that’s to say nothing of the DVD purchases or movie rentals.

READ NEXT: The Ending Of 2022’s ‘Scream’ Movie, Explained

The stars in the series are all very wealthy, with many claiming net worths into the tens of millions, if not more. Recurring Scream stars Courteney Cox, Neve Campbell, and David Arquette are all back for what fans are calling Scream 5. Throughout the years, they’ve definitely commanded enviable paydays to return to the roles they have made so iconic.

Here are the Scream franchise’s richest cast members ever.

What Is Courteney Cox’s Net Worth?

The richest member of the Scream cast made the vast majority of her millions elsewhere, even though she has now appeared in all five films in the series. Courteney Cox earned an incredible sum from her time on Friends, one of the most successful sitcoms ever. By the end of the program, Cox and her co-stars were making $1 million per episode, and they have continued to rake it in from DVD sales, syndication, and streaming rights, bringing her total net worth to at least $150 million.

What Is Liev Schreiber’s Net Worth?

Liev Schreiber appeared in the first three Scream films, which is no easy feat for a franchise that kills off characters left and right. The Ray Donovan star portrayed Cotton Weary, the accused murderer and then TV celebrity who has a strained relationship with the heroine. Throughout his career, he’s amassed a net worth of at least $40 million, according to Celebrity Net Worth.

What Is David Arquette’s Net Worth?

The former Mr. Courtney Cox ranks third on the list of the Scream cast members who have the largest net worths. As a member of the Woodsboro Police, Deputy Dewey Riley has seen it all, and despite being stabbed, he’s made it to the fifth installment. Since first breaking in a major way in the early ’90s, the only male Arquette sibling has built his fortune up to a sizable $30 million.

What Is Emma Roberts’ Net Worth?

The young niece of Oscar winner Julia Roberts, Emma Roberts first found fame in movies and TV shows for kids. After several years, she decided to transition into more mature roles, and one of them was as the star of Scream 4. The film was a comeback for the series, as it was released in 2011, more than a decade after the third, which was supposed to be the last installment. Roberts was fantastic in the movie, and it helped her boost her reach and bank account afterward.

What Is Hayden Panettiere’s Net Worth?

Hayden Panettiere scored her role in Scream 4 just as her career was hitting a high. The actor had just wrapped her popular TV show Heroes (but hadn’t yet started Heroes Reborn) when the fourth film in the horror staple arrived, and fans were thrilled to see her in it. In the decade-plus since the movie premiered, those who love Scream have been hoping her character Kirby Reed will return.

What Is Neve Campbell’s Net Worth?

There is no Scream without Neve Campbell. From the moment she appeared in the first film as the heroine Sidney Prescott, a new scream queen was made. In the decades since she introduced the beleaguered star, Campbell has changed how she portrays the character, who has also grown over time. She started off as very afraid (understandably), but she quickly became powerful, self-reliant and an absolute badass. Campbell has made a great living on TV shows like Party of Five and House of Cards as well as movies such as The Craft and Drowning Mona, but nothing has lined her pockets like this fright-filled franchise.

What Is Jamie Kennedy’s Net Worth?

When Scream was first released in 1996, Jamie Kennedy was a big star. While his profile has diminished somewhat in the decades since Wes Craven introduced the world to Ghostface, the first three films just wouldn’t be the same without him. The movies were a big get for the comedian, who surely collected a sizable paycheck, even for the time. Randy Meeks isn’t present in Woodsboro any longer, but his immense knowledge of film trivia helped the other characters understand what was happening to them.

What Is Skeet Ulrich’s Net Worth?

Like several actors included on this list, Skeet Ulrich can be seen in many TV shows and movies, but none stand out like Scream. The then-rising talent was perfectly cast as Billy Loomis in the first film, brilliantly blending his sex appeal with fear and an aura of mystery. The odd high school-aged boyfriend of Sidney Prescott will always be remembered by those who know the franchise, and a lot of his later roles can be traced back to the success of the movie.

What Is Rose McGowan’s Net Worth?

These days, Rose McGowan is seemingly as well known for her activism and brave work to bring down sexual predators like Harvey Weinstein as she is for her onscreen appearances. McGowan appeared in the first Scream, so she will always have a place in fans’ hearts. In the debut film, she played the quirky and too-cool Tatum Riley, and while she was already a well-known figure before the horror picture, McGowan’s career improved afterward.

What Is Matthew Lillard’s Net Worth?

Like Jamie Kennedy, Matthew Lillard was already a heartthrob and a star before he appeared in Scream, but the box office success took his career to a new level. While he did land some more high-profile gigs after the scary movie came and went, his moment in the spotlight didn’t end up lasting too long. For many years now, he has seemingly made much of his money from voice acting as Shaggy Rogers in more than two dozen different Scooby-Doo movies.

What Is Rory Culkin’s Net Worth?

The youngest of the Culkin siblings (his older brothers are Home Alone star Macaulay and Succession actor Kieran) has mostly made a living appearing in indie films, picking and choosing his roles carefully. He has earned praise for his performance in pictures like Mean Creek, You Can Count on Me, and Gabriel, as well as more well-known titles like Signs and Scream 4, in which he played the decidedly odd Charlie Walker.