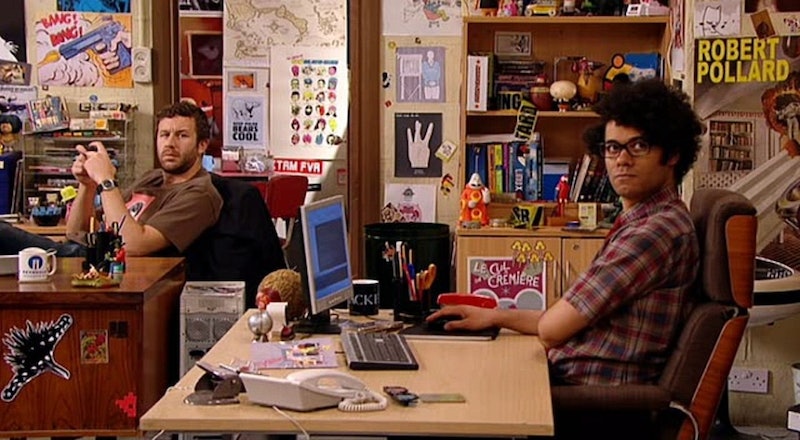 With so many of us isolated at home, one thing no one’s taking for granted at the moment are our friends. They’re there for you in good times and bad, happy to listen to your latest gossip, and still love you even if you don’t ship the same couples they do. While seeing your friends in person is a little more difficult nowadays, there’s still plenty of ways to keep connected, which is why we’ve made a list of 12 TV shows to watch with friends available right now on Netflix. Like friendship, television shows offer relationships that span time and last (if only for a few seasons). Both have plenty of bumps in the road, shared moments of joy, and surprise long-lost siblings (ok maybe that one’s just TV). When it comes to watching shows together, there’s always the chat service of your choice at the ready, including good old texting. And Netflix created Netflix Party specifically for groups like you and your buds to enjoy. The service syncs up your viewing so everyone gets to the same shocking hookup or murder reveal at the same time, with a built-in chat window for you all to gasp collectively. It also might save a few friendships when one of your clique goes ahead and watches an entire season in one night while the rest of you are on episode three. Like the friends of Friends, these shows are there for you and your close group of friends.

Adjusting to life after escaping a doomsday cult bunker would be hard for anyone, but Kimmy is determined to live life anew. Moving to New York City with just a positive attitude and absolutely no knowledge of the real world, she quickly makes the Big Apple kinds of “friends” (bizarre landlady, over the top neighbor, boss with absolutely no boundaries) who become actual friends thanks to the city’s pressure cooker weirdness.

Ever wonder what it would be like to live the high life in NYC? Gossip Girl proves that the glitz and glamour of Upper East Side living is almost as fabulous as the drama found inside those penthouse walls. But if you really need more convincing than this, let me just say two words to you: Chuck Bass. This character takes the idea of swooning to a whole new level. You know you love him. Xoxo.

There’s a darkness in the woods, as the residents of Twin Peaks are about to find out. The bizarre murder of prom queen Laura Palmer turns the entire town upside down, with everyone’s secrets tumbling out. From more standard Dallas-style conspiracy plots to buy up all the town’s land for development, to messages from a woman whose log tells her things, the strange journey of FBI agent Dale Cooper to solve the mystery leads to some truly surreal places.

Epic bromances… fantastic ‘shipping pairs… hilarious hijinks — that’s everything you can expect from New Girl and more. Sure, the sitcom has hit a few bumps along the way plot-wise and poor Winston still has yet to receive a good story arc, but in general this show gets two thumbs up in the friendship department and leaves you with some solid catchphrases you’ll be using with your friends for years to come. Douchebag jars for everyone!

Imposter syndrome meets complete social ineptitude in the basement of a major business. Lying completely about her computer knowledge, Jen does actually have plenty to offer to her two-member IT department, not that they want to hear it…or change…or face the outside world. With 90% of their job consisting of asking people if they’ve turned it off and on, Roy and Maurice have taken the slacker/overachiever route towards work shirking. Disguised as a fish out of water comedy, this show highlights the bond bringing together so many work friends: trying to wiggle out of increasingly ludicrous situations set up by the ridiculousness of your workplace.

First of all, anything involving Amy Poehler should automatically be considered BFF material. Second of all, this show has a superbly high appreciation for waffles, which I think we should all strive to emulate. And lastly, it founded one of the greatest fake holidays of all time: Galentine’s Day. A day that completely centers around ladies celebrating ladies. Can it get any better than that? Ovaries before brovaries = words to live by.

All the glamour of Hollywoo (amazing name rebrand by Mr. Peanutbutter) held just at arm’s length by a former sitcom celebrity and the group that accrues around him. Purely transactional roles like biographer, agent, or random hanger on slowly grow into real relationships over the seasons as Bojack tries grappling with his past to become, if not a better person at least a less abusive one. If that sounds too grim, I’m leaving out the slapstick and animal pun jokes constantly unfolding in the background.

The sheer knowledge of knowing that Kelso and Jackie eventually end up together in real life should be enough to commence days’ worth of squealing. But the entire premise of the show alone is worth tuning into with your closest friends. You may not have grown up in the ‘70s yourself, but you can still appreciate/relate to all of the obstacles life throws at these teens.

A show that highlights a truth everyone should’ve learned in high school: history is never boring. Though this show takes plenty of creative liberties and adds a CW flair to events, this compelling account of the early life of Mary, Queen of Scots makes for a truly captivating series — one that you’ll want to talk about after each and every episode. And the show only touches on her tiff with first cousin once removed Elizabeth (yes, the eventual queen of England). More politics than all of the West Wing, more murders than an episode of Sons of Anarchy, plus: don’t forget about the clothes. Those gorgeous (albeit historically inaccurate) clothes.

Who would’ve thought philosophy could be so goofy and fun? Aside from the show’s larger examination of what “good” and “evil” mean, its core group of fellow afterlifers who grow into genuine friends is an excellent case study of several types of opposites attracting and making each other into better forking human beings. Sartre wishes his idea could’ve had more Janets.

The ultimate show for and by theater kids, despite focusing on a high school glee club, with the rare cast that evolved as time actually passed (high schoolers actually graduating from high school? On TV??) This is a series that prides itself on spontaneous dance/singing parties, which is pretty much a core requirement for some friendships. If that sounds like you and your pals, none of you will be able to stop yourselves from grabbing your finest hairbrush and joining in.

While there’s a million doctor dramas available to watch, this one leans far more heavily on the emotional intertanglings and deep crushes of its characters (it’s the show that created “McDreamy”) I think we can all agree that there’s no better person to watch this show with than “your person.” And with sixteen seasons available, this show’s got the same kind of staying power.