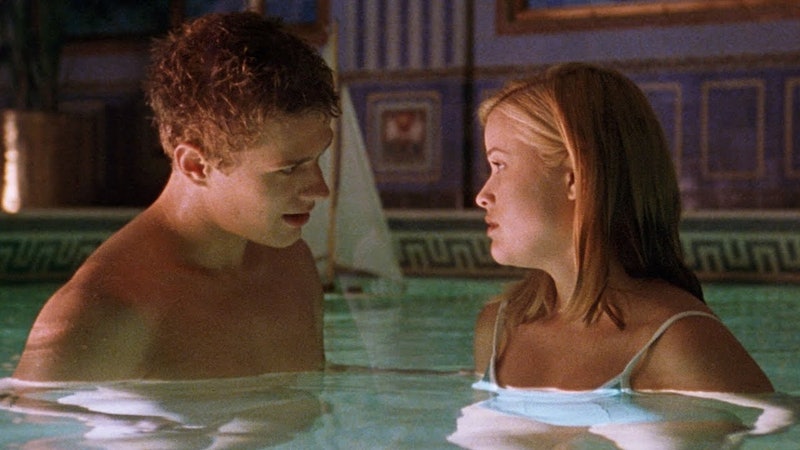 Finding the perfect date night movie is a delicate balance. You're not just trying to mesh two different tastes — you're also trying to do so while still maintaining a makeout-friendly mood. Scary movies can seem like a good way to go (cuddling!), but if you tread into gory territory, you might slice through every last trace of romance with a metaphorical chainsaw. You also may think that going über-romantic is best — but then, you’ll just end up comparing yourselves to unrealistic, fictional romantic leads. And you might think action is a great idea, but... well, scratch that. Action is usually a good idea.

The point is, you're walking a tightrope here. You want to express a part of your personality to your significant other (or potential significant other, or just regular old date), but you don't want to ruin the mood. The mood is key here, folks. Otherwise, it's not a date night movie... it's just a movie with that person you've been with so long you don't go on dates anymore, which is a different kind of night entirely.

If you still feel lost in the wide world of streaming options, fret not. We have you covered. Check out these 22 great date night movies, and get snuggling.

Yes, it's technically a romance. But that's okay because it’s also got everything else: fencing, fighting, torture, revenge, giants, monsters, chases, escapes, true love, miracles... everything but the kitchen sink. The Princess Bride has remained on film fanatics’ "favorites" lists for decades, so chances are it's going to be a crowdpleaser for you and your beau.

This isn’t your grandparents’ Little Women. Greta Gerwig’s take on the beloved Louisa May Alcott book takes a few artistic liberties that freshen the story (no shade to Alcott). Saoirse Ronan is compelling as the headstrong Jo March, not to mention Florence Pugh, Laura Dern, Merlyl Streep, and Timothée Chalamet’s nuanced performances. It’s the combination of Gerwig’s screenplay and directing with the all-star cast that makes Little Women a modern classic.

Okay, hear me out. The Hours is one of the greatest films of all time, and a bit of a tearjerker — which means you can offer a shoulder for your date to cry on. Based on Michael Cunningham’s Pulitzer Prize-winning novel of the same name, The Hours revolves around three women (including Nicole Kidman as Virginia Woolf) from various decades who are somehow tied to Woolf’s Mrs. Dalloway. Also, the original score by Philip Glass is hypnotizing.

Watch now on Showtime or Hulu

Eternal Sunshine of the Spotless Mind (2004)

Eternal Sunshine of the Spotless Mind is one of those movies that's so out of the box, it works for almost any occasion. And there's something kind of amazing about the main characters’ optimism: they want to try again to be together, with a literal clean slate, even though they know how they crashed and burned as a couple the first time around.

Yes, breaking up is hard to do. But watching Jason Segel and Kristen Bell break up? That's less hard (although the breakup scene, during which Segel's character is butt naked, will probably go down as one of the most awkward in movie history). Peter (Segel) quickly learns that getting over his ex might not be as easy as he thought, after arriving on his solo vacation and running into Sarah and her new (rockstar) boyfriend, played by Russell Brand.

Upon its release, Cruel Intentions was pegged as “the dirtiest-minded American movie in recent memory.” And they’re not wrong. Featuring pretty much every teen heartthrob from the late ’90s — like Sarah Michelle Geller, Reese Witherspoon, and Ryan Phillippe — this cult classic revolves around teenagers with no empathy, huge trust funds, and a near-sociopathic knack for manipulation.

Safety Not Guaranteed is a really fun, kind of bizarre option for a quirky, quasi-sci-fi date night —particularly for fans of Aubrey Plaza's dry humor. The film follows Darius (Plaza), a magazine writer, as she investigates a story that involves time travel with a strange but charming Mark Duplass.

Watch or rent on Amazon Prime

This hilarious examination of love, breaking up, and how pop music plays into the whole shebang is good for a date — but it could result in a relationship talk, so just be prepared for that.

Another great option for music lovers and movie buffs is Almost Famous. Starring Kate Hudson, Patrick Fugit, Frances McDormand, and Zooey Deschanel, this film will make you reminisce about how deep you thought you were when it became your favorite movie in eighth grade. It'll be cute.

And while we're in the movie buff zone, we can't forget Mike Nichols’ The Graduate. It might be a little awkward for those of you if you also happen to be on a date with a much-older family friend. But for everyone else, it's a classic — and perfect for a date you think will involve more talking than kissing after the movie.

What Ever Happened to Baby Jane is the movie that relaunched a thousand careers. Actually, it was closer to just two: Bette Davis and Joan Crawford. The Hollywood legends saw a dip in both their job prospects, until this movie came along and made them stars again. Plus, the notorious off-screen feud between the two actors is Hollywood lore at this point (and fodder for a Ryan Murphy series). This horror-thriller will leave you cuddled in each other’s arms for safety.

If you want to go for the classics — or to become more-than-best-friends with your best friend — why not watch When Harry Met Sally? The movie's hysterical insights into how men and women relate to each other have made it stand the test of time. Plus, it stars Billy Crystal at the top of his game and Meg Ryan in her prime.

Who knew collegiate a cappella could be so funny (on purpose)? The only problem with watching Pitch Perfect for date night is that you'll both walk away singing B.o.B's "Magic," which, depending on your take, is either a great or terrible way to end an evening.

You had me at hello? Try, "You had me at the human head weighs eight pounds." Despite the many years that have passed since Jerry Maguire came out, this movie still holds up as a classic. You and your date will probably catch yourselves quoting it for days after, but at least you'll have a cute inside joke then, right?

Want a little more action with your sexiness? Try Mr. & Mrs. Smith. Even the most adamant member of Team Jen can't deny the chemistry between Brangelina: this is one of the hottest action movies made in recent decades.

Speaking of hot action movies, why not try True Lies? It's James Cameron's unsung masterpiece and features a strong romantic storyline between an undercover spy (Arnold Schwarzenegger) and his wife (Jamie Lee Curtis). All in all, it’s a win-win.

For more Schwarzenegger content, and an even more convoluted (but equally amazing) James Cameron romance-within-an-action-flick, check out The Terminator. We should all be so lucky to be as hotly pursued as the T-800’s targets.

This is one of those movies that’s so charming and warm, you’re guaranteed to smile by the end of it. If your date happens to be scheduled around the holidays, this film is perfect for snuggling together on the couch by the fire. Judy Garland is truly in her prime in Meet Me in St. Louis, as is the dashing Tom Drake.

Yes, we have now officially reached the action segment of the list, but you can't say I didn't warn you (it's all in the intro). I have yet to meet a person I like who doesn't like Jurassic Park. Feel free to apply this test to your date to make sure they’re worth your time. Plus, Laura Dern!

The ultimate date night movie is obviously the one about trying to set up your mom and dad because your mom inadvertently fell in love with you instead. There might be a lot of flicks that say romance, but none that say it quite like Back to the Future, which also happens to be a comedy/sci-fi classic.

And if you're looking for something with mass appeal, why not go for one of the most popular movies ever made? The Avengers has comedy, action, and even a touch of romance (oh, Pepper). It actually has everything for everyone.

This article was originally published on Aug. 22, 2014