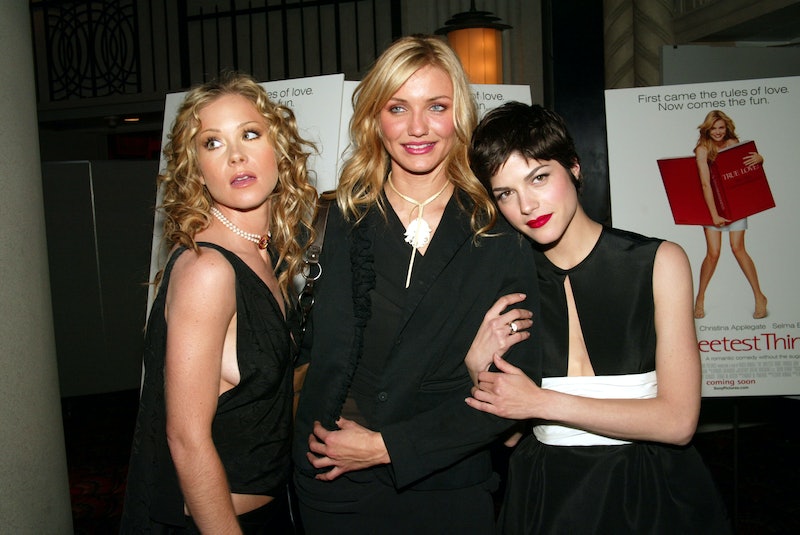 In possibly the raunchiest film of her career, Cameron Diaz stars as Christina Walters, who prefers to focus on finding Mr. Right Now rather than wasting time looking for Mr. Right. But after meeting Peter (Thomas Jane) at a club and having a change of heart, she and her best friend Courtney (Christina Applegate) embark on a road trip to find him in this 2002 comedy. Along the way, they sing an original “Penis Song,” stumble upon an unexpectedly dangerous glory hole, and serenade their friend Jane (Selma Blair) with Aerosmith to help her get, erm, unstuck from a man’s genitals.

This 2011 romantic comedy follows Emma (Natalie Portman) and Adam (Ashton Kutcher), two estranged friends who reunite as young adults and decide to pursue a “no strings attached” sexual relationship. The two pledge not to fight, catch feelings, or get jealous, but it becomes difficult not to fall in love as they grow closer. Greta Gerwig, Ludacris, and Mindy Kaling also star in the lustful box office hit, not to be confused with Friends With Benefits, which was also released in 2011 and stars Kutcher’s wife, Mila Kunis, alongside Justin Timberlake.

Based on Andy Behrens’ young adult novel All the Way, this 2008 road trip comedy follows 18-year-old recent high school graduate Ian Lafferty (Josh Zuckerman), who catfishes as a charming, brawny man online to meet a woman who goes by Ms. Tasty (Katrina Bowden). Along with a couple of friends, Ian embarks on a road trip from Illinois to Tennessee in hopes of meeting and having sex with Ms. Tasty, but the group ends up in over their heads as they’re faced with hitchhikers, murderers, and car thieves.

Seth Rogen and Elizabeth Banks play longtime friends-turned-roommates Zack and Miri, respectively, whose immense debts lead them to star in a pornographic film together in order to make money. They attempt to avoid developing romantic feelings for one another but soon begin experiencing jealousy, which complicates the intimate production. Written and directed by Kevin Smith (Clerks), the 2008 sex comedy also stars Justin Long (Pineapple Express), Craig Robinson (The Office), and Tisha Campbell (Martin).

The Great’s Nicholas Hoult stars in this 2017 romantic drama as Martin, who meets Gabriella (Laia Costa) on an online dating app after they both experience bad dates. They spark a connection, meet at a bar, and later have sex, which leads to them entering a relationship and moving in together. But as they navigate cheating and jealousy, the pair decides to start an open relationship, which leads to flirtatious fun for both of them — until it sparks more jealousy. Also starring Criminal Minds’ Matthew Gray Gubler, the ultra-steamy, Drake Doremus-directed film received critical acclaim upon its release.

This 2018 French comedy follows three forty-something women — Sonia (Marie-Josée Croze), Cécile (Virginie Ledoyen), and Elise (Axelle Laffont) — who travel to the south of France on vacation to help Cécile prepare to sell her beach home. There, they meet a trio of twenty-something men who deem them “MILFs” and strike up a sexual relationship for the duration of their trip. Directed by Laffont, the film grossed more than a combined $1 million at the French, Ukrainian, and Russian box offices.

The first French-language film to be commissioned by Netflix, this 2018 romantic comedy follows ruthless chauvinist Damien (Vincent Elbaz), who suffers a head injury and wakes up in a world where women hold the bulk of societal privilege and men experience sexism. Despite his confusion, Damien must navigate this upside-down world and attempt to spark sexual relationships with women who treat him the way he’s treated them.

Released in 2021 and set in the late ’60s, this Netflix original biographical film tells the story of Parisian brothel owner Madame Claude (Karole Rocher), whose knowledge places her in a position of power over underworld figures and French government officials. But when a rich young woman named Sidonie (Garance Marillier) joins the brothel, her own history and powerful connections threaten Claude’s business.

Meg Ryan stars in this steamy New York-set 2003 thriller as shy writer and English teacher Franny Avery, who witnesses a sexual assault suspected to have led to a murder. After Detective Giovanni Malloy (Mark Ruffalo) questions her, he strikes up a passionate, sensual relationship with Frannie that complicates the investigation. With the killer running free and several suspects around her, Frannie’s trust in several individuals — including Giovanni — is intensely tested.

This 2018 coming-of-age romantic comedy stars Noah Centineo (To All The Boys) as college student Lance Black, who convinces his peer James Wilson Singer (Kendall Sanders) to develop a hookup app for students at their school. They set out to make money and meet new girls, but as the app becomes too popular, things get way out of control.

Johnny Simmons (Jennifer’s Body) stars in this 2016 dramedy as 27-year-old sex therapist Dr. Peter Newmans, known for being non-sexual and having published a book about sex not being necessary in a relationship. But after suffering an injury, he learns a brain tumor has been preventing him from transitioning to puberty. Once it’s successfully removed, he experiences his first erections and extreme sexual desire, which leads to an overhaul of his entire life. Brittany Snow, Kumail Nanjiani, and former SNL star Beck Bennett also star in the film.

15. Not Another Teen Movie

Before he was Captain America, Chris Evans made his film debut as Jake Wyler (based on Zack Siler from She’s All That) in Not Another Teen Movie, a 2001 comedy in the vein of Scary Movie. Also starring Mom’s Jaime Pressly and Mean Girls’ Lacey Chabert, the film features ultra-raunchy parody takes on scenes from ’80s and ’90s teen films, including 10 Things I Hate About You and Pretty in Pink.

Miguel Arteta directed and stars in this 2018 experimental comedy, which she also co-wrote alongside co-star Alia Shawkat (Arrested Development). Duck Butter follows rising actress Naima (Shawkat), who meets Sergio (Arteta) at a gay bar and strikes up a romantic connection. After hooking up, Sergio proposes they spend 24 hours together to fast-track their relationship and explore each other’s personalities and sexual preferences — which seems fun at first but proves to be quite tricky. Kumail Nanjiani, Mae Whitman, and the Duplass brothers also appear in the film.

Young cousins Emmeline (Brooke Shields) and Richard (Christopher Atkins) survive a shipwreck and grow into puberty together on a South Pacific island in this 1980 romantic drama. The Oscar-nominated film follows a morally questionable plot in which the two relatives encounter first-time sexual urges and eventually become lovers. Despite negative reviews from critics, The Blue Lagoon was a commercial success and spawned two sequels.

Based on a novel by Blanka Lipinska, this 2020 Polish romantic drama follows Laura Biel (Anna-Maria Sieklucka), who embarks on a trip to Sicily to save her relationship. There, she encounters Don Massimo Torricelli (Michele Morrone), a Mafia boss who kidnaps and imprisons her for 365 days in hopes she will fall in love with him. Eventually, she develops Stockholm Syndrome in this steamy, critically-panned movie so beloved by Netflix viewers that two sequels are currently in development.

More like this
Here’s Everything Coming To & Leaving Netflix In February
By Jake Viswanath
11 Movies To Watch At The 2023 Sundance Film Festival
By Chloe Foussianes
This New Dating Show Is Netflix's Answer To 'Bachelor In Paradise'
By Grace Wehniainen
Yes, You Can Stream ‘To Leslie’ In The UK Now
By Sam Ramsden
Get Even More From Bustle — Sign Up For The Newsletter
From hair trends to relationship advice, our daily newsletter has everything you need to sound like a person who’s on TikTok, even if you aren’t.

This article was originally published on Sep. 14, 2016