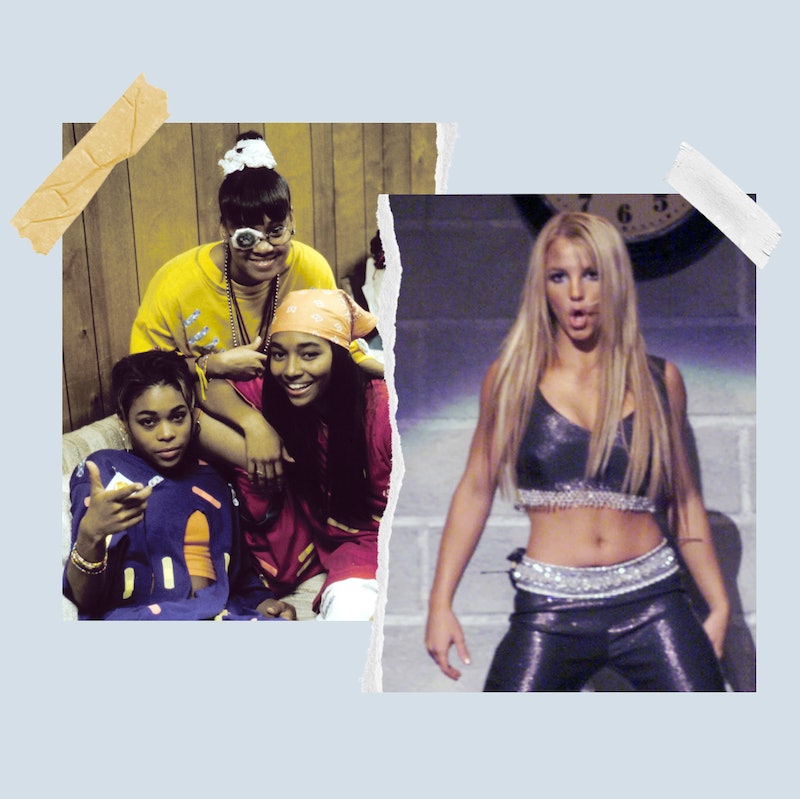 Who could ever forget the music that defined the 1990s? Because of bubblegum pop, mainstream hip-hop, and a bold new onslaught of alternative rock, the ’90s became a decade of hitmakers, sound changers, and artists whose impact on popular culture went above and beyond just making music. Now, with throwback clothing trends, television series reunions, and even nostalgic decor, everyone seems to be kicking it back to the beloved era. So, what better way to lean into the nostalgia of that time than by reading this list of 20 albums every ’90s kid knows the words to?

If you grew up in the ’90s it’s more than likely you still have a playlist that brings you back to the good ol’ days of watching MTV’s Total Request Live, learning every dance move to Britney Spears’ “Baby One More Time”, and burning mix CDs featuring eventual classic artists like Nirvana to Outkast. Boy bands, pop queens, angsty rock anthems, and quintessential hip-hop defined the end of the century in pop culture. So grab your Discman, slide off your dELiA*s catalog platforms, sink into your inflatable couch, and see if you can sing along to these 20 albums filled with plenty of songs every ’90s kid still knows the words to.

*NSYNC’s self-titled debut album not only sparked most ’90s kids’ obsession with the boy band but also introduced the world to now classic lovestruck ballads “Tearin’ Up My Heart” and “I Want You Back.” Released only in Germany in 1997 — before hitting the U.S. and international markets in 1998 — the album sold more than 15 million copies worldwide and peaked at No. 2 on the Billboard 200. Comprised of Chris, Justin, JC, Joey, and Lance, *NSYNC will always be associated with the style (who could forget those studded bandanas), dance moves, and sound of the ’90s.

Long before Queen Bey reigned supreme as a solo artist and cultural icon, the world was introduced to Destiny’s Child. The pop and R&B group that originally included LaTavia Roberson and LeToya Luckett, but eventually settled on a lineup composed of Beyonce Knowles, Kelly Rowland, and Michelle Williams, is still getting fans to sing along to their lyrics to this day. In 1999, they released, The Writing’s On The Wall , giving us hit singalong worthy tracks like “Jumpin Jumpin,” “Bills, Bills, Bills,” and “So Good.”

It’s hard to think of what the ’90s would of been like if Britney Spears didn’t completely change what it meant to be a pop star with her debut album ...Baby One More Time. From its eponymous lead track, to hits like “(You Drive Me) Crazy” and “Sometimes,” the album’s 11 songs, gave listeners their first peek into the career and sound of one of the world’s biggest pop music icons in history.

No boy band quite understands the power of a comeback like ’90s pop group the Backstreet Boys. In fact, just a year after releasing their self-titled debut, they followed it up with the catchy Backstreet’s Back. Full of dance-worthy hits like “Everybody (Backstreet’s Back),” “As Long As You Love Me,” and “If Don’t Have You,” the album gave new life to fans of the first album, and permanently sealed them as pop culture favorites.

Backstreet’s Back wasn't the only ’90s album from the Backstreet Boys that every ’90s kid rocked out to. The 1999 release of Millennium kept the party going with 12 lovelorn memorable tracks, including “I Want It That Way,” “Larger Than Life,” and “The One.” It was a more mature offering from the Backstreet Boys, seeing them shift slightly from their pop propensities and traveling deeper into R&B territory, introducing them to new fans along the way.

Union Jack mini dresses, platform shoes, and the phrase “girl power” immediately inspire visions of the formidable powerful pop-culture group known as The Spice Girls. Baby Spice, Scary Spice, Sporty Spice, Posh Spice, and Ginger Spice, gave young girls around the world an example of what it was like to embody fierce feminine energy, and their debut gave them an anthem for the movement. The album introduced us to 10 fun and empowering tracks, including “Wannabe,” “2 Become 1,” and “Say You’ll Be There.” To this day Spice is an irreplaceable addition to the soundtrack of the ’90s.

Of course, the Spice Girls were only giving fans a taste of what they had to offer with Spice. In 1997 they followed up with their sophomore album, Spiceworld, introducing the world to hit songs like “Spice Up Your Life,” “Viva Forever,” and “Stop.” The group also filmed a comedy by the same name that same year, adding to overall “Spicemania” that described the hysteria over their music, while also giving fans something extra to watch and sing along to.

In the ’90s, pop princesses were having a moment, one that fans likely still remember to this day. One of those princesses was none other than Christina Aguilera, who stepped onto the scene with her debut self-titled album, and immediately broke into the hearts and minds of listeners with her infectious hit single “Genie In A Bottle.” The album came packed with croon-worthy tracks like “What A Girl Wants” and “Come On Over Baby (All I Want Is You),” which had ’90s kids not only chanting the lyrics but also trying to emulate the star’s dynamic vocal range.

It may seem like it at times, but the most memorable albums of the ’90s didn’t all involve pop bands, R&B, or choreographed dance moves. Third Eye Blind made their debut in 1997 with their self-titled album, giving fans a good dose of angst to sing along to. Tracks like “Losing A Whole Year,” “Jumper,” and “Semi-charmed Life” made it into the ears and Walkmans of many kids and adults.

With the lyrics “let’s go girls,” ’90s country-pop star Shania Twain pulled countless people onto the dance floor. “Man! I Feel Like A Woman!” can still be heard on dance floors and karaoke bars across the world on any given night thanks to her album Come On Over. Released in 1997, the album also gave fans hits like “From This Moment On” and “You’re Still The One,” proving Shania’s ability to create sing-along hits for a wide range of listeners.

In 1995, singer-songwriter Alanis Morissette gave fans something to sing and scream along to. With behemoth tracks like the love-scorn ballad “You Oughta Know,” the reflective “Hand In My Pocket,” and the relatable “Ironic,” it’s not surprising that Jagged Little Pill dug itself so deep into the ’90s pop culture consciousness that it was eventually turned into a musical, giving fans new ways to sing along to every word.

By the end of the ’90s, rock was fun again, expressed with bright colored guitars, onstage antics, and songs with cheeky lyrics fans just had to sing along to. Blink-182's Enema Of The State was the perfect representation of that moment in time. With 12 tracks, including the hilarious “All The Small Things,” and now classic pop-punk ballad “What’s My Age Again?” the band was well-versed in the art of having a good time and bringing fans along for the ride.

Before *NSYNC and the Backstreet Boys launched an epic battle of the boy bands, Boyz II Men sweet-talked and danced their way into our hearts. Released in 1994, the group’s third studio album II was a 13 track tutorial on what it meant to be a soulful boy band that we’re sure fellow popular artists took notes on. With songs like “All Around The World,” “On Bended Knee,” and “I’ll Make Love To You” it’s impossible not to sing along.

Before launching her formidable solo career, Gwen Stefani was the founding singer of ska meets punk rock ’90s band No Doubt, inspiring a countless number of women who wanted to embrace her sound, style, and one-of-a-kind energy. Released in 1995, the album Tragic Kingdom gave punk rock fans songs like “Spiderwebs,” “Don’t Speak,” and even feminist anthem “Just A Girl.”

With their second studio album, rock band Nirvana brought a more radio-friendly version of their sound to the masses. It also changed the trajectory of the genre in general. People were shocked that it became universally loved, climbing up the Billboard charts with its lead single “Smells Like Teen Spirit” and a music video that could constantly be seen at any given moment on MTV. The album also brought us grunge hits “Come As You” and “Lithium.”

With his debut album Ready to Die, the late great rapper Notorious B.I.G. (Christopher Wallace) gave listeners a sneak peek into a very specific time of New York City’s history. The autobiographical album told stories of dope boys and run-ins with the cops, as well as touched on his everyday struggles. Yet far outside of New York, the world still found it relatable. Tracks like “Big Poppa” and “One More Chance” still came with large doses of optimism, showing listeners the life the hip-hop star wanted to live and an outlook people still rap along with today.

The world was introduced to the lyrical prowess and delicate power of singer-songwriter Fiona Apple when she released her debut album Tidal. With it, came multiple ’90s hits like “Shadowboxer,” “Sleep to Dream,” and the Grammy-winning “Criminal”. When fans weren’t singing along to her words, they were also impressed by her ability to speak out for what she believed in — beliefs she’s held strong to to this day.

Fans of Oasis may be split when it comes to the in-band sibling rivalry between Noel and Liam Gallagher, but one thing they can all agree on is that the track “Wonderwall” is a song most ’90s kids feel like they were born knowing all the words to. The band’s second studio album (What’s the Story) Morning Glory? also introduced fans to the lyrical magic of “Don’t Look Back in Anger” and “Champagne Supernova,” making it not only a go-to rock album at the time, but arguably one of the most sing-along-inducing records still in rotation at karaoke bars and dive bars to this day.

The impact of Lauryn Hill’s album The Miseducation of Lauryn Hill cannot be overstated. It inspired a whole new crop of songwriters to bare their souls and tell their truths, putting their full selves into their music. It also inspired countless ’90s kids to sing along with hit songs like the empowered “Doo Wop (That Thing),” the optimistic “Everything Is Everything,” and the updated lovesick cover of “Can’t Take My Eyes Off of You,” making them fans for life.

When it comes to artists who know how to create a song that you’ll be singing along to for decades to come, TLC definitely fits the bill. With their second studio album CrazySexCool, they gave fans the secretive sexy “Creep,” the sweet “Diggin’ On You,” and even the socially conscious “Waterfalls.” It’s hard to imagine a world where the lyrics “I seen a rainbow yesterday” wouldn’t push you to sing every word of late rapper Lisa “Left Eye” Lopes’ verse.

More like this
Now That 'Renaissance' Is Here, Let’s Revisit Beyoncé’s First Solo Album From 2003
By Grace Wehniainen
Beyoncé's Renaissance Samples Everyone From Kelis To Right Said Fred
By Jake Viswanath
22 Movies On Netflix That Are Perfect For The Whole Family
By Bustle Editors
Josh Peck Shows Love To Jennette McCurdy After Her Shocking 'iCarly' Revelations
By Radhika Menon
Get Even More From Bustle — Sign Up For The Newsletter

This article was originally published on March 23, 2016