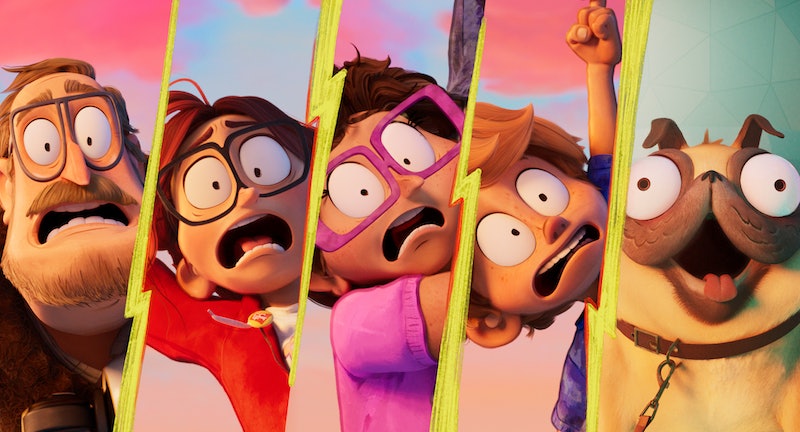 Netflix promises nothing short of tons of movies to watch at any time, beamed directly into your living room. You can find classics from your childhood to watch when you're feeling nostalgic, interesting documentaries for when you want to learn something new, and plenty of tearjerkers for when you need a good cry. But one of the more underrated genres on Netflix is the “feel-good film” — the type of movie that will cheer you up when you’re feeling blue.

The platform offers plenty of ways to escape to a happier place for a couple of hours while you forget about the harshness of the real world and come back refreshed. Some of the films included below will make you feel like a kid again, others will leave you inspired, and many of them promise to help with a much-needed laugh session. With 25 solid feel-good movies on this list, there are plenty to choose from.

1. Homecoming: A Film By Beyoncé

This film won near-universal acclaim, from the Beyhive to the music and film industry, which recognized Homecoming with six Emmy nominations and one Grammy win. I mean, this concert documentary even includes a Destiny’s Child reunion! The only people not into this celebration of Queen Bey's Coachella performance — and its origins — would be people who don't like Beyoncé, and let’s not even go there.

John Mulaney's beloved special marked the comedian’s return to stand-up after he took an extended hiatus while working in TV. It’s easy to see that he’s mastered the art — and why he’s gained such a devoted following. In this Netflix feature, Mulaney leaves no topic unturned, poking fun at his marriage, growing up as a Catholic, and meeting Bill Clinton.

This is kind of a breakup movie, but hang in there because Someone Great is mostly about three friends (played by Gina Rodriguez, DeWanda Wise, and Brittany Snow) supporting one another through their darkest hour. It’s like a modern SATC, but better, as it’s more realistic (and there’s no Che Diaz, the most controversial new character from the SATC reboot).

4. Dolemite Is My Name

The legend Rudy Ray Moore seems like a contradiction: a devout, churchgoing man who also created the foul-mouthed pimp character who'd go on to influence a generation of rappers and comedians. The R-rated comedy Dolemite Is My Name tells his story, with Eddie Murphy starring as Moore in the actor’s much-awaited comedy comeback since his ’90s golden age. Wesley Snipes, Snoop Dogg, Tituss Burgess, and Chris Rock also star in the 2019 film.

This 2017 rom-com is well worth adding to your list. Stars Jessica Williams and Chris O’Dowd are a winning match — despite their horrible blind date start — and watching them try to out-snark each other throughout the film is a delight. If you’re craving more Williams movies to watch, head over to Hulu (we won’t tell) to laugh along as she plays the immensely cool but questionable teacher in Booksmart.

This 2019 documentary treads rough ground but is ultimately a tale of people coming together across a common plight of job loss. American Factory was one of the first projects to come out of Higher Ground, Barack and Michelle Obama’s production company, and went on to win Best Documentary at the Academy Awards.

7. The Mitchells vs. The Machines

Don’t knock a good animated movie. The Mitchells vs. The Machines is about an oddball family who has to save the world during a road trip after robots turn against humanity. It’s absolutely delightful, and no, it’s not just for kids. This 2021 film even bagged an Oscar nomination for Best Animated Feature. Give it a try!

8. Monty Python and the Holy Grail

A very, very, very silly film that nails period costumes and throws everything else out the window. A satire of the legend King Arthur and the knights of Camelot, the 1975 classic Monty Python and the Holy Grail is the movie to watch for no-brainer hilarity.

If you like action films or superhero films, this one’s a combination of both, with Ryan Reynolds heading a team of underground vigilantes who faked their demises so they can operate outside the law. Is 6 Underground groundbreaking? Absolutely not. But under the direction of Michael Bay, the stunts, locales, and fights are cool as ice.

10. To All the Boys I’ve Loved Before

This little trilogy based on the novels by Jenny Han centers around a shy girl who writes a bunch of letters to her crushes — and then accidentally sends them. Oops. Lana Condor shines as Lara Jean Song Covey in this sweet rom-com, so prepare to feel all warm and fuzzy inside. If you have time and need extra cheering up, watch all three movies to see how her love story unfolds.

Crip Camp: A Disability Revolution is also unbelievably sweet and says a lot about the power of community and inclusion. It’s another documentary from Higher Ground, the Obamas’ production company, so expect a moving film about Camp Jened, a summer camp in the New York Catskills for children with disabilities, and the people who would go on to lead the disability rights movement.

Dry non sequiturs, lovely piano playing, and the comedian’s “twin” providing commentary outside the club feature prominently in Zach Galifianakis: Live at the Purple Onion. The 2006 release is Galifianakis’ first stand-up special, and it tells the comedian’s origin story of sorts, so it’s a perfect blast from the past.

Based on the novel of the same name by Julie Murphy, Dumplin’ is the film equivalent of listening to Dolly Parton for two hours, with the bonus of an uplifting “love yourself and your body” message. It stars Jennifer Aniston as a former beauty queen who finds it difficult to connect with her daughter Will, a self-proclaimed fat girl played by Danielle MacDonald.

On paper, a movie about an older instructor teaching an ingenue how to be a lady and then falling for her shouldn’t work — but we all know Audrey Hepburn, who stars as Eliza Doolittle, can sell and do anything. In fact, she does do anything and everything in this film, including singing a couple of Broadway classics.

Eurovision Song Contest: The Story of Fire Saga is ridiculous, long, and so silly, but the songs are catchy. “Husavik” even earned an Oscar nod! But as out-there as the story is, its sweetness sneaks up on you. Plus, Will Ferrell and Rachel McAdams star while Dan Stevens (Downton Abbey) steals the show as a competitor steals the show.

All of Ali Wong’s specials are terrific, but her follow-up to Baby Cobra might be her best. Motherhood — and all its exhaustion, which she narrates in great, beautiful, gory detail — looks good on her. Her third Netflix special, Don Wong, where she talks a lot about wanting to cheat on her husband, is also incredibly hilarious.

17. Hunt for the Wilderpeople

This pre-Thor Taika Waititi film Hunt for the Wilderpeople has one of the weirder premises you’ve ever heard: a delinquent teen and his foster father are on the run from the police in the New Zealand wilderness. But the film, based on Barry Crump’s novel Wild Pork and Watercress, is so much funnier than it sounds.

It’s a fairytale romance like no other: Boy is an ogre, girl regularly shapeshifts into one. After Shrek (Mike Myers) rescues Princess Fiona (Cameron Diaz) as part of a deal with Lord Farquaad in exchange for the privacy of his residence (the swamp), they fall in love — sort of. When misunderstandings tear them apart, Shrek needs to stop her from getting married.

Immigration, racism, emotionally devastating stories about high school — none of that should be funny. But in The Daily Show’s Hasan Minhaj’s deft hands, it’s side-splitting, educational, and timely. The 2017 Netflix special Hasan Minhaj: Homecoming King was so outstanding that it even earned a Peabody Award a year later.

The Saturday Night Live comedian has been doing stand-up since he was in his teens, but in his 2020 Netflix special, Pete Davidson: Alive From New York, the comedian gets extremely personal about his late father, how he became famous, and why he’s branded as a ladies’ man. For that, he credits ex Ariana Grande for generously talking about his endowment.

Yes, the red-headed orphan may have been initially exploited for a billionaire’s press optics, but it’s still what saves Annie from her hard-knock life in this 2014 Broadway musical remake. After the titular 10-year-old (played by Quvenzhané Wallis) meets Daddy Warbucks (Jamie Foxx) as part of his company’s PR stunt, her life changes for the better. No more chores at Miss Hannigan’s (Diaz) foster home; It’s a new family for her. Aside from nostalgic tunes, Annie is a great reminder that family can come from the unlikeliest of places.

In Murder Mystery, married couple Audrey (Aniston) and Nick (Adam Sandler) become murder suspects when a wealthy man is slain on a yacht they were graciously invited to. To prove their innocence, they need to figure out who did it. While the actor pairing and plot aren’t necessarily new, there’s something comforting about watching Aniston and Sandler, separately and together.

Nothing beats a murder mystery led by a big ol’ furry pup. The crime-solving Mystery Incorporated crew, played by Freddie Prinze Jr., Sarah Michelle Gellar, Linda Cardellini, Matthew Lillard, and Neil Fanning, had already disbanded, but when they hear of strange occurrences at an island locale, they reunite one last time. Fans of the cartoon will enjoy Fred, Daphne, Velma, Shaggy, and Scooby as they unmask the criminal mastermind (played by Rowan Atkinson) in the 2002 live-action Scooby-Doo movie.

Julia Roberts doesn’t get what she wants in My Best Friend’s Wedding — she is sabotaging her best friend’s (Dermot Mulroney) engagement because she wants him for herself — but no matter, it’s OK to not root for Roberts this time. This 1997 flick is definitely worth the watch if only to see Diaz embarrass herself at karaoke and to witness the charming Rupert Everett get an entire restaurant to sing along to “I Say A Little Prayer.”

Say what you will about the oddball family in1991’s The Addams Family, starring Anjelica Huston and Raul Julia, but the morbid and creepy clan knows a thing or two about family loyalty. They even welcome an imposter parading as their long-lost family member, no questions asked. The film is absurd enough to make you forget reality for a couple of hours, and a young Christina Ricci stars as Wednesday in the perfect nostalgic ’90s throwback.

More like this
9 Films About Mental Health To Watch On Netflix UK
By L'Oréal Blackett and Sophie McEvoy
'Doctor Who’s New Star Is Already Huge On TikTok
By Maxine Harrison
Where Is Dr. Cline Now?
By Morgan Leigh Davies
Why The '365 Days' Sex Scenes Are Good, Even If The Movies Aren’t
By Arya Roshanian
Get Even More From Bustle — Sign Up For The Newsletter

This article was originally published on Aug. 4, 2016