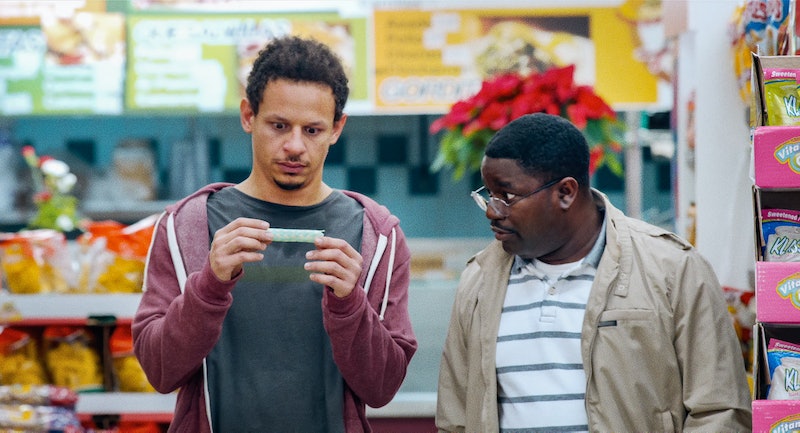 When you turn on Netflix, you pretty much know what type of movie you'll get when you scroll through the endless rom-com, rom-dram, comedy, action, and horror genres. But if you want to watch a movie that's a little bit out there and will leave you guessing until the very end — and maybe even after that — you've come to the right place. Luckily, Netflix offers a great selection of truly odd films that cater to whatever your preferred brand of “weird” is. There’s the dystopian, hyper-violent, R-rated crude, funny, highly intellectual, and even movies with poorly executed plots or characters, among other strange options.

To reduce any indecision that may come the next time you sign on to the streaming platform, here’s a curated list of 21 weird movies on Netflix, including some that feature monsters, puppets, or fluffy cats. It’s all perfect fodder for your next night in and that confused yet oddly satisfying “WTF did I just watch?” moment. Read on for a classic ’70s movie banned in multiple countries, a Netflix original interactive choose-your-own-adventure film, an Oscar-nominated documentary about an octopus, or even a Jennifer Aniston and Adam Sandler comedy that is as confusing as it is comforting. Trust, your reactions will run the gamut — disgust, fear, joy, heartbreak, or, at the very least, a raised eyebrow. So, get ready to be confused by these 21 strangest movies on Netflix:

In the Netflix Original Don’t Look Up (2021), the apocalypse is fast approaching and yet... no one seems to care. Scientists Kate (Jennifer Lawrence) and Randall (Leonardo DiCaprio) are desperately trying to warn an irreverent population that a comet headed straight for Earth will wipe out the planet. Directed by Adam McKay, the comedy is eerily accurate, frustratingly funny, and very star-studded. Its stellar ensemble cast includes Meryl Streep, Cate Blanchett, Timothée Chalamet, Ariana Grande, Tyler Perry, and Jonah Hill.

Will Ferrell and Rachel McAdams star as Icelandic musical duo Fire Saga, whose dream is to compete in the acclaimed Eurovision Song Contest and represent their small town of Húsavík. Stay for the Nordic costumes, the musical acts, as well as the joy of seeing former Mean Girls queen bee try her hand at comedy. Plus, Ferrell co-wrote the script (alongside Andrew Steele), so expect his iconic brand of absurd character comedy. Demi Lovato, Pierce Brosnan, and Dan Stevens also make an appearance in this two-hour-long 2020 Netflix Original.

What would you do if there was a zombie outbreak? Probably not gear up for a heist, which is exactly what the star-studded cast of Army of the Dead attempts. Dave Bautista, Elle Purnell, Tig Notaro, Omari Hardwick, and Hiroyuki Sanada try to steal $200 million from a vault in a zombie-run casino filled with zombie tigers, half-naked undead strippers, and a soulless ring leader. An interesting take on the zombie movie genre, this movie will at the very least give you some survival ideas for the apocalypse.

Eric André brings his notorious prank antics to Bad Trip, a hidden-camera prank comedy. In the 2021 film, best friends Chris (André) and Bud (Lil Rey Howery) go on a trip to New York to find the woman of Andre’s dreams. They steal a car from Bud’s still-in-jail sister Trina (Tiffany Haddish), who breaks out of prison to get her vehicle — and the two of them — back. It’s pure chaos, especially as unsuspecting New York bystanders are scandalized by crude pranks, one of which involves a “gorilla” in a zoo.

In Cam, Madeline Brewer (The Handmaid’s Tale) stars as Alice, an online sex worker, or cam girl, with a significant following until someone who looks exactly like her steals her passwords and identity. Isa Mazzei, the screenwriter of the 2018 Netflix Original, drew inspiration from her own experiences as a cam girl to destigmatize the industry. It’s a psychological thriller for the Only Fans generation and guaranteed to make you think about what you just watched long after the credits roll.

A 2020 Netflix original documentary, My Octopus Teacher is a first-person account of filmmaker Craig Foster and the yearlong friendship he forged with the tentacled animal in the South African kelp forest. The octopus has long been known as one of the world’s most mysterious creatures, so expect the feature to be strange but interesting. It even won an Oscar for Best Documentary Feature, which just goes to show the weirdness is next-level and quite prestigious.

After the 2011 film Just Go With It sealed their comedic onscreen chemistry, Aniston and Sandler reunited and coupled up in 2019 for Netflix’s Murder Mystery. After traveling to Europe for their honeymoon, a New York City cop and hairdresser find themselves in the middle of Luke Evans’s yacht and an open murder case that needs solving. The feature became Netflix’s biggest premiere, and a sequel is already in the works.

Stefan Butler, a young programmer in the ’80s, plans to develop a video game based on a “choose your own adventure” book, and it’s up to viewers to choose his adventure. Imbued with the Black Mirror anthology’s signature science-fiction dystopia, the 2018 Netflix Original Black Mirror: Bandersnatch drew impressive viewership for its first-of-its-kind interactive storytelling. While it was praised for its innovative approach to storytelling, the film’s plot, however, didn’t prove as exciting to critics. Still, the twisty movie is worth a watch.

Based on the acclaimed French play of the same name by Laurent Baffie, this Spanish comedy follows a group of patients with Obsessive-Compulsive Disorder (OCD). While waiting for their therapist, whose flight is delayed, they are forced to interact and analyze each other’s quirks. Directed by Vicente Villanueva, this 2017 movie stars Rossy de Palma, Oscar Martínez, and Paco León.

No strange movie list is complete without a Stephen King title. Based on the author’s 1992 namesake novel, Gerald’s Game is about a sex-game-gone-bad. On a trip in a remote locale, Gerald (Bruce Greenwood) handcuffs his wife Jessie (Carla Gugino) to the bed right before he dies from a heart attack. With no nearby neighbors to hear her screams, Jessie’s desperation to escape causes Stephen King-like hallucinations.

The woe of 16-year-old Jodi Kreyman (Ava Michelle) in this Netflix Original movie is that she’s super tall — over six feet. Bullied for her height and unable to find high school boys who are interested in her, she develops a crush on exchange student Stig, who is also tall. It’s a rom-com with a not-so-romantic, not-so-funny plot that was heavily roasted when it premiered. Sabrina Carpenter, Angela Kinsey, and Griffin Gluck also star in the film, which is getting a sequel.

Tim (David Spade) thinks he’s texting his dream girl, Missy (Molly Sims), but he’s actually texting another Missy (Lauren Lapkus), his one-time nightmare date, who he then mistakenly invites on a trip to Hawaii. Yikes. While Lapkus was lauded for her acting chops as the raunchy mess of a miss(y), the Netflix Original romantic comedy released in 2020 didn’t garner the same favorable reviews.

In 2009, comedian and host Steve Harvey penned the dating how-to Act Like a Lady, Think Like a Man, which inspired the Tim Story-directed namesake film in 2012. In it, the ladies, played by Meagan Good, Gabrielle Union, Taraji P. Henson, and Regina Hall, all read Harvey’s book to whip their boyfriends — Romany Malco, Michael Ealy, Jerry Ferrara, and Kevin Hart — into commitment. Until the men find the book and use its lessons against them. It’s funny, it’s star-studded, and it even led to a sequel, Think Like A Man Too. But, ladies, would you really follow the relationship tenets of one Steve Harvey? Absurd, we know. That’s why this film makes the list.

A biblical comedy starring Jack Black and Michael Cera, Zed (Black) and Oh (Cera) are cast out of their tribe for eating the forbidden fruit and go on an adventure that leads them to rub shoulders with notable figures like Cain and Abel. If you want an absurd, if somewhat blasphemous, romp through the Old Testament, Year One, directed by comedian-turned-director Harold Ramis, is the movie for you.

Ah, the movie that turned Sandra Bullock into the “Bird Box Lady.” In this post-apocalyptic horror film based on the 2014 namesake novel by Josh Malerman, Malorie Hayes (Bullock) wades through a world (and quite literally a river) in a blindfold to protect herself and her children from entities that force anyone who catches sight of them to commit suicide.

In the Caryn Waechter-directed 2019 horror film Deadcon, the internet-famous characters Ashley and Megan are played by real-life YouTubers Lauren Elizabeth and Claudia Sulewski, respectively. The plot centers around them joining ViewCon, a fan meet-and-greet for uber-popular social media influencers, but unfortunately, they end up plagued by more than adoring fans. A vengeful ghost, whose computer programmer father had a hand in the invention of social media, haunts them in their hotel room.

In Fatal Affair, Ellie (Nia Long) seems to have the perfect married life ’til a run-in with an old friend easily leads her astray. At work, she bumps into David (Omar Epps), who’s hired for his hacking skills (danger! danger!). They end up making out, and David becomes obsessed. He turns into a full-on stalker-murderer, proving that you’ll never know who will turn out to be a psycho-stalker and that just because people are in therapy doesn’t mean they have it together. David is no Joe Golberg, and it’s not really an affair per se, but it’s a low-stakes thriller for fans of the stalker genre.

Would you watch Sandra Oh get into numerous brawls with Anne Heche? Same. Veronica (Oh) and Ashley (Heche) have been nemeses since college. So when they bump into each other at a party decades later, a physical fight ensues. Unfortunately, multiple fistfights lead to multiple two-year comas in Catfight, the 2016 dark comedy directed by Onur Tukel. The cast, including Oh and Alicia Silverstone, have described the film as “feminist.” It’s also surprisingly violent, so watch at your own risk.

Another murder mystery rom-com makes the list: the Michael Showalter-directed The Lovebirds. In it, bickering couple Leilani (Issa Rae) and Jibran (Kumail Nanjiani) witness a murder and flee the crime scene. Suspicious? Absolutely. And they know it too. So they decide to solve the murder themselves. What could possibly go wrong? A lot, apparently, and their detective skills get them into all sorts of trouble. We’re talking bacon grease-level torture. The film reunites Showalter with Nanjiani, who co-wrote and starred in the critically-acclaimed The Big Sick.

This article was originally published on March 14, 2016